Terry Jeffrey
|
Posted: Feb 17, 2016 12:01 AM
Share   Tweet
The opinions expressed by columnists are their own and do not necessarily represent the views of Townhall.com. 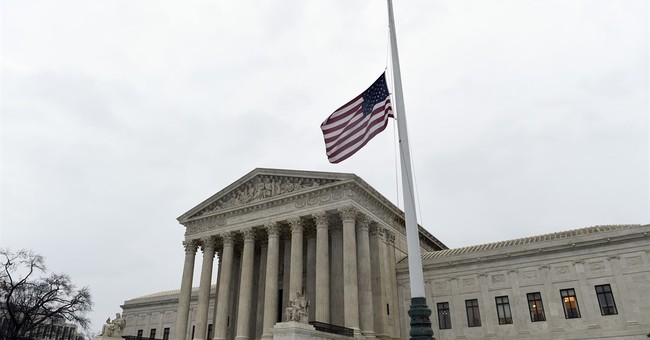 "Why is this different from bigamy?"

It was one of those lance-like questions Justice Antonin Scalia frequently threw at lawyers making flawed arguments.

What Scalia's questions (and dissenting opinions) often exposed was a Supreme Court ready to unilaterally change the meaning of the Constitution -- and, thus, undermine our representative form of government.

If the court had a permanent majority of justices like Scalia, representative self-government would not be at risk from the court. But today it is at risk.

As it was in 2003, when the court heard Lawrence v. Texas. The question then: Is there a constitutionally protected right to same-sex sodomy, and are states, therefore, barred from prohibiting it?

Essentially the same question had come before the court in the 1986 case of Bowers v. Hardwick. Then, Justice Byron White -- a John F. Kennedy appointee -- wrote the opinion that ruled it was not unconstitutional for states to prohibit sodomy.

Opponents had argued that such laws violate the 14th Amendment, which says "nor shall any state deprive any person of life, liberty, or property, without due process of law." Sodomy, they argued, was a "fundamental right" and therefore a "liberty" protected by this language.

White and four others justices did not agree.

"The issue presented," said this JFK appointee, "is whether the Federal Constitution confers a fundamental right upon homosexuals to engage in sodomy, and hence invalidates the laws of the many States that still make such conduct illegal, and have done so for a very long time. The case also calls for some judgment about the limits of the Court's role in carrying out its constitutional mandate."

What the majority saw in Bowers was a court moving to usurp a power it did not legitimately have.

Seventeen years later, when Lawrence came before the court, Scalia apparently saw the same problem framed around the same issue.

So, Scalia put this question to the lawyer then arguing that the court should declare sodomy a constitutionally protected right: "Why is this different from bigamy?"

In part of his answer, the lawyer tried to draw a distinction between a type of behavior and the institution of marriage -- which he described as an institution "the state creates."

"Now," the lawyer said according to the transcript of the oral argument, "bigamy involves protection of an institution that the state creates for its own purposes and there are all sorts of potential justifications about the need to protect the institution of marriage that are different in kind from the justifications that could be offered here involving merely a criminal statute that says we're going to regulate these peoples' behaviors..."

In Lawrence, the court's majority did rule that same-sex sodomy was protected by the 14th Amendment and over-ruled state laws prohibiting it.

In dissent, Scalia pointed to where this was going.

"The Texas statute undeniably seeks to further the belief of its citizens that certain forms of sexual behavior are 'immoral and unacceptable,' ... the same interest furthered by criminal laws against fornication, bigamy, adultery, adult incest, bestiality, and obscenity," wrote Scalia. "Bowers held that this was a legitimate state interest. The Court today reaches the opposite conclusion."

"If, as the Court asserts, the promotion of majoritarian sexual morality is not even a legitimate state interest, none of the above-mentioned laws can survive rational-basis review," said Scalia.

In his dissent in Obergefell v. Hodges, Scalia argued that under the Constitution, as correctly understood, the people could decide through their state governments to approve or not approve same-sex marriage. But the court had usurped that power and more.

"Today's decree says that my Ruler, and the Ruler of 320 million Americans coast-to-coast, is a majority of the nine lawyers on the Supreme Court," said Scalia.

"This practice of constitutional revision by an unelected committee of nine, always accompanied (as it is today) by extravagant praise of liberty," he said, "robs the People of the most important liberty they asserted in the Declaration of Independence and won in the Revolution of 1776: the freedom to govern themselves."

A majority of the court has said that individuals have a right to kill unborn babies, but that the majority of a state does not have a right to prohibit two people of the same sex from "marrying." The court is now poised to decide whether Catholic nuns -- despite their First Amendment right to the "free exercise" of religion -- can be forced to act against their religion in providing health insurance that covers abortion-inducing drugs.

What will be next from what Antonin Scalia rightly called the "unelected committee of nine" that now revises our Constitution?