What We Learn From Football 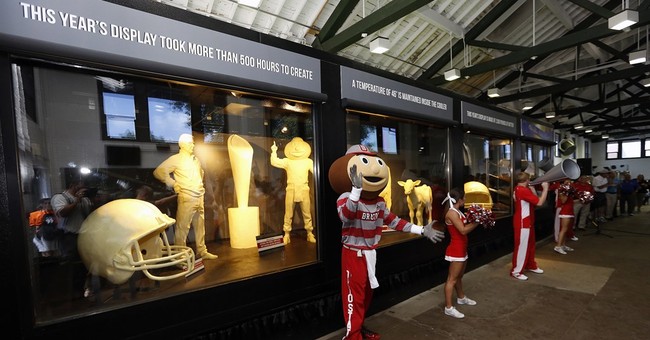 Trending
In the coming days, a million or more teenage boys will eagerly show up at their high school campuses weeks before regular classes start. They will plan to spend their whole day at school, pay close attention to their instructors, and work as hard as they can.

They will spend time in the classroom and time in the field, and they will all be focused on a single, venerable all-American goal: becoming part of a winning football team.

Football is America's greatest game for boys, not only because of the lessons it teaches but also because of the broad range of young men who can play the game and learn those lessons.

In track and field, one athlete faces off against another -- perhaps a teammate. Even the relay teams have only four runners.

In basketball, each team puts just five men on the court at a time.

In baseball, it is nine -- and perhaps a designated hitter.

And there are variations on all these. A shrewd coach might put different men on the field when his team faces a desperation onside kick rather than an opening kickoff -- or when it is fourth and one, not third and 30.

In the 2013-2014 school year, according to the National Federation of High School Sports Associations, 1,093,234 boys played high school football in the United States.

No other sport came close.

The first great lesson boys learn playing football is that great things are only achieved after long hours of hard work. Great high school football teams do not just show up on game day and play. Nor do its players first show up in August when it is time for double sessions. Players on great teams work all year round to develop the strength, endurance and skills they need to win in the fall.

A second great lesson boys learn playing football is that they must play as a team to win. The greatest of quarterbacks cannot save his team if the line cannot block. A powerful offense cannot lead a team to victory if the defense cannot stop the opposition. When teammates work diligently together to prefect their skills in practice and then put them to test on the field, they learn to respect each other, trust each other and rely on each other.

More than any other team sport American boys play, football requires and develops physical courage at the same time it encourages fair play. Opposing football players are supposed to hit each other -- airly, safely and according to the rules -- but, nonetheless, with ferocity. Yet they cannot fail to appreciate the difference between a fair hit and a dirty one, nor fail to respect the former and revile the latter.

A fourth great lesson football players learn is that wit matters. You can study another team's offense and defense and sometimes discover a way to outsmart them.

But the greatest lesson football teaches is really a combination of all its other lessons. It is that football -- like a free society -- functions as a true meritocracy.

The team with the greatest natural athletes does not always triumph. Sometimes the team given less at the start wins more in the end.

If they put in the long hours of work, if they trust their teammates and merit their teammates' trust in return, if they are tough and fair, and if they play smart, they just might beat a team that is bigger and faster and stronger than them, but never mastered the underlying virtues of the game.

That is why football is not just a uniquely American game, but also one that reflects the American Dream.