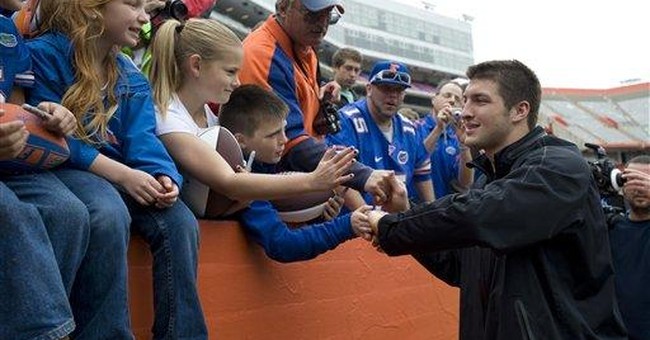 You can attend an entire season of eighth-grade basketball games and never see a 14-year-old boy adorned with a tattoo.

Turn on the NCCA basketball tournament, now down to the Sweet Sixteen, and it would be difficult, if not impossible, to find a game where at least one player on each team is not to some degree tattooed.

Sometime between his early teens, when he was in middle school, and his late teens and early 20s, when he made the college team, the tattooed athlete let some "artist" somewhere permanently embed ink in the only the epidermis he will ever have.

Of course, you would have seen the same thing watching the college football bowl games this winter.

It would be a mistake to conclude that the tattoos seen today on college athletes raise an issue particular to college sports. It is a good bet the young men who play football and basketball in major college programs put in more hard work to perfect their skills in an activity that requires both physical and intellectual focus than most of their non-sports-playing classmates put in at anything.

It is also a fact that the athletes have nowhere near a monopoly on the tattoos on campus.

In 2005, a group of researchers at Texas Tech University published the results of a survey they had done gauging the attitudes toward tattoos of "520 undergraduate students at a large public university in the Southwest."

"While many people believe that tattooing establishments are inspected, monitored or regulated, there are no universal procedural health standards for tattooing," the researchers wrote in the journal Sociological Spectrum. "Thus, obtaining a safe tattoo means the customer must be knowledgeable about the artist, the technique, the equipment and wound or skin care. Tattoos can be obtained in a studio or in many makeshift situations, such as mobile vans, flea markets, rock concerts and even fraternity parties."

"The potential for infections and the transmission of blood-borne diseases such as hepatitis B (HBV) and hepatitis C (HCV) are the major physical concerns present with tattooing," said the researchers.

"Despite these risks and variations in regulation and enforcement, nearly 20 percent of our college-age respondents reported they had at least one tattoo, and nearly one third reported a serious interest in obtaining a tattoo," said the Texas Tech researchers.

In 2006, the Journal of the American Academy of Dermatology published a study titled, "Tattoos and body piercings in the United States: A national data set." These researchers surveyed 500 Americans between the ages of 18 and 50, asking them whether they did or did not have tattoos and piercings.

They found a definite trend toward tattoos in younger Americans. Overall, they discovered, 24 percent of their survey sample had been tattooed. But the likelihood a person had been tattooed increased as their birth date became more recent.

According to this survey, religion also played a big role in who got tattooed.

"Tattooing is prohibited in the Old Testament and in the Quran, but it seems more likely that in contemporary American society the fact that the less religious sport more body art is related to a lack of feeling of community among those who do not actively belong to religious institutions," the researchers wrote.

But the community of college athletes in this country, and those who coach and mentor them, could have a positive impact on those who will follow them into college if they displayed more faith and less body ink -- even at the risk of ridicule from our liberal cultural establishment.