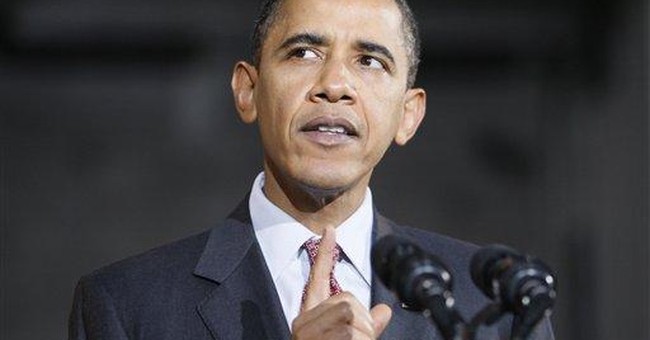 When President Barack Obama entered office in January, the greatest problem America faced was neither the war in Afghanistan nor the recession. It was the imminent crisis of the welfare state.

Not only has Obama failed to deal with this crisis, he is pursuing policies that will bankrupt America.

In March, the Peter G. Peterson Foundation, led by former U.S. Comptroller General David Walker, calculated the total value of the federal government's "unfunded liabilities" as they stood at the end of fiscal 2008. These liabilities include the publicly held portion of the national debt plus the amount the government must pay to cover all the entitlement benefits it has promised to living Americans through Social Security, Medicare and other welfare-state programs minus the tax revenue the government can expect to collect to pay for these entitlements under existing tax law.

The sum of these unfunded liabilities, the foundation discovered, stood at $56.4 trillion. That equals $435,000 for every full-time worker in the United States.

How did Obama respond to this problem?

First, he signed a $787-billion stimulus law. Obama repeatedly claimed this law -- that not one member of Congress read in its entirety -- was urgently needed to create jobs. In fact, most of the new spending it authorized was for longer-term projects, including creating a national system of electronic health records for every person in America in anticipation of Obama's plan to nationalize the health care system.

The Government Accountability Office reported last month that at the end of fiscal 2009, 78 percent of the stimulus money remained unspent. But don't worry: Obama will spend it eventually.

Then, Obama offered his first federal budget. In 2008, President Bush's last year in office, the federal government spent $2.983 trillion. Under Obama's plan, according to the Congressional Budget Office, annual federal spending will climb to $4.982 trillion by 2019. In 2008, the federal deficit was a record $459 billion. Over the next decade, Obama's plan would increase the national debt by a total of $7.137 trillion, running annual deficits averaging $713.7 billion per year.

CBO's estimate of Obama's new federal debt was based on optimistic assumptions. It assumed low inflation rates, low interest rates and a national economy that grows for 10 straight years after this year without dipping into another recession. It also assumed that the Bush tax cuts would expire as planned after 2010 and income tax rates would rise for middle-class Americans.

The CBO estimate of Obama's borrowing and spending was also made before Congress finalized drafts of the health care reform legislation Obama has pushed as his signature policy proposal.

Obama has said he would not sign a health care bill that increases the national debt, and when the CBO released its analysis of the Senate health care bill last month it concluded that the bill would actually decrease federal deficits by $130 billion over 10 years.

But that was an illusion.

The key elements of the bill (including federal subsidies to buy health insurance for people making less than 400 percent of the poverty level) do not take effect until 2014 -- after Obama runs for re-election in 2012. As a result, the bill's full cost is not exposed during the initial 10-year time frame that the CBO analyzes when making its official cost estimates.

Yet it doesn't end there. The cost of the new health care entitlements will be "growing at about 8 percent per year toward the end of the 10-year budget window," reported CBO. "As a rough approximation, CBO assumes continued growth at about that rate during the following decade."

Do the math: If the bill follows the spending trajectory predicted by the CBO, it will cost $423.13 billion in 2029 and its total 10-year cost from 2020 through 2029 will be $3.07 trillion. Obamacare will cost more in its second decade than the entire federal government cost the year Obama was elected.

At that price tag, it does not even accomplish the goal of universal health care. "By 2019, CBO and JCT estimate, the number of nonelderly people who are uninsured would be reduced by about 31 million, leaving about 24 million nonelderly residents uninsured (about one-third of whom would be unauthorized immigrants)," say the CBO report.

But if Obama succeeds in enacting his health care reform, he will move on to his plan for a "comprehensive immigration reform" that will put illegal aliens on a "pathway to citizenship" -- making them eligible for the federal health care entitlement.

If Obama succeeds, get ready for the crash. It is coming.