The War Bush Is Losing Is Not in the Middle East 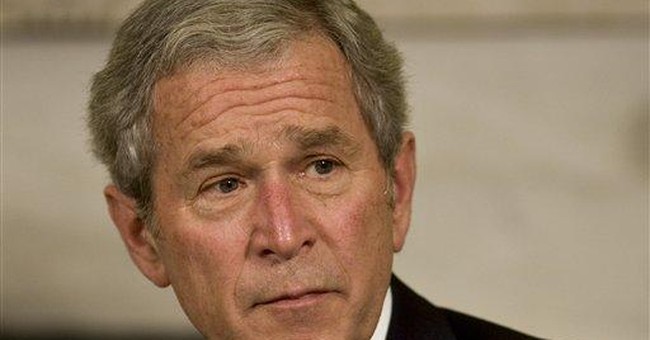 George W. Bush unwittingly highlighted one of the greatest failures of his presidency last week in an interview with the Dallas Morning News, and then did it again Tuesday when he met with Mexican President Felipe Calderon.

The United States, Bush rightly told the Morning News, shares responsibility with Mexico for the incredible level of violence in that country.

Bush might as well have gone on to say: If the president of the United States had done his job and controlled the border from the U.S. side, smugglers would not be fighting today to control it from the Mexican side. Nor would they be running drugs into American cities and thus killing American kids and destroying American communities.

What Bush did go on to tell the paper was this: "The violence is awful. President Calderon knows it's awful. He knows he has got a war on his hands against people who use violence to achieve their objectives."

This is the war Bush leaves office losing. Not the two on the other side of the world -- the one right here.

Just how bad is security on the U.S.-Mexico border as Bush's eight years as commander in chief draw to a close? Documents recently published by Bush's State and Justice departments provide some perspective.

Last year, Penny Starr of CNSNews.com reported that State had quietly issued a "Travel Alert" for Americans contemplating a visit to Mexico. The alert was updated in October, and according the State Department Website, the information in it was current as of Tuesday.

"Some recent Mexican army and police confrontations with drug cartels have taken on the characteristics of small-unit combat, with cartels employing automatic weapons and, on occasion, grenades," says the alert. "Firefights have taken place in many towns and cities across Mexico, but particularly in northern Mexico, including Tijuana, Chihuahua City and Ciudad Juarez."

State warns that Americans traveling near the U.S. border in Mexico might have difficulty distinguishing between the criminals, the police and the military.

"U.S. citizens are urged to be alert to safety and security concerns when visiting the border region," says the alert. "Criminals are armed with a wide array of sophisticated weapons. In some cases, assailants have worn full or partial police or military uniforms and have used vehicles that resemble police vehicles."

In December, Justice published the National Drug Threat Assessment for 2009. It says Mexican drug trafficking organizations (DTOs) threaten not only the U.S. border, but also the interior of our country.

"Mexican DTOs represent the greatest organized crime threat to the United States," says the threat assessment. "The influence of Mexican DTOs over domestic drug trafficking is unrivaled. In fact, intelligence estimates indicate a vast majority of the cocaine available in U.S. drug markets is smuggled by Mexican DTOs across the U.S.-Mexico border. Mexican DTOs control drug distribution in most U.S. cities, and they are gaining strength in markets that they do not yet control."

Because Bush did not secure our border, no corner of America is now secure against these Mexico-based crime syndicates. "Law enforcement reporting indicates that Mexican DTOs maintain drug distribution networks or supply drugs to distributors in at least 230 U.S. cities," says Justice.

This brings us back to Bush's meeting Tuesday with Calderon. In the public part of this meeting, Bush did not directly say that the United States should enforce its border and stop illegal drugs and drug smugglers from entering our country and finding their way into our schoolyards, parks and parking lots.

But he did say Americans should consume fewer drugs from Mexico and send fewer guns south. "The less drugs we use, the less pressure there will be in Mexico," he said. "We have got responsibilities to help prevent guns from going from the United States to Mexico."

Where the blame truly lies is with him. America was surely capable in the last eight years of securing her southern border. We did not lack the manpower or the engineering capability to do it. We did not lack a popular consensus that it should be done. What we lacked was a president who wanted to do it.