President Bush and the Ghost of New Years Yet to Come 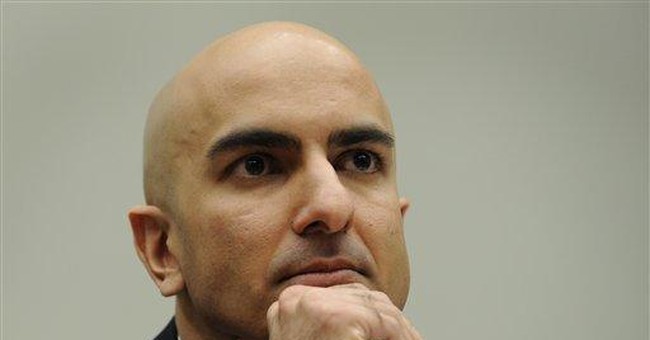 The Ghost of New Years Yet to Come wakes you from a fretful sleep and brings you to a cold December day in the not-too-distant future.

The long-lived baby boom generation is now in full retirement. A deep recession has set in. Fiscal crisis looms.

Tax revenues are dwindling. With the national debt having climbed to remarkable heights, creditors are wary of loaning new money to a U.S. government struggling just to meet the Social Security and Medicare obligations promised to retired workers.

America's balance sheet looks then like General Motors' does today: too much debt, too many promised benefits.

A lame-duck president decides he will not allow Social Security and Medicare to default on his watch. He will pass the problem to his successor.

To do this, he desperately needs cash for a temporary bailout of the entitlement system.

He proposes that Congress immediately increase income-tax rates by 7 percentage points for all income brackets.

The House, dominated by liberals and moderates, readily assents. The bill goes to the Senate, where a small bloc of conservatives survives in the minority.

Some Senate liberals argue that tax rates should be raised higher than the president has requested -- but only on the rich.

The conservatives object to any tax increase at all, arguing it will deepen the recession and actually diminish federal revenue.

The liberals and conservatives join to filibuster the president's plan. A cloture vote fails. The tax increase is defeated.

He then instructs the treasury secretary to raise federal tax rates by 10 points for all brackets -- effective immediately. The new rates will be levied on the next paycheck of every worker. Full Social Security and Medicare benefits will be sustained through January, keeping the program alive and unchanged until the next president can be inaugurated.

So, how would the unilateral raising of tax rates by a president yet to come differ from the unilateral loaning of billions to auto companies by the president we have now? The answer: In principle, it doesn't differ.

In a memo published Dec. 12 by the Heritage Foundation, legal analyst Andrew Grossman and regulatory policy analyst James Gattuso argued that bailing out auto companies with money from the $700 billion Troubled Asset Relief Program (TARP) that Congress enacted in October would be "legally wrong."

"Even if the administration were inclined to do so, it simply lacks the power under the statute passed by Congress to tap TARP funds to prop up auto manufacturers," said Grossman and Gattuso.

The authors point to the language of the TARP law, which gives the treasury secretary significant discretion as to what he can spend the money on but sharply limits where he can spend it to "financial institutions."

The law says the treasury secretary "is authorized to establish the Troubled Asset Relief Program ... to purchase, and to make and fund commitments to purchase, troubled assets from any financial institution ."

It specifies that the "term 'financial institution' means any institution, including, but not limited to, any bank, savings association, credit union, security broker or dealer, or insurance company, established and regulated under the laws of the United States ."

Grossman and Gattuso argue it is not plausible to stretch this definition to encompass manufacturing companies. "An automaker is unlike any of these things, being a manufacturer of goods, not a financial intermediary," they write. Therefore, providing TARP money to auto companies "would be both unprincipled and, ultimately, illegal."

President Bush, of course, failed to get Congress to enact legislation to provide money to auto companies.

That brings us back to the Constitution. Article 1, Section 9 reads, "No money shall be drawn from the treasury, but in consequence of appropriations made by law."

In his commentaries on the Constitution, Justice Joseph Story explained why the Framers gave Congress this power. "If it were otherwise," he said, "the executive would possess an unbounded power over the public purse of the nation; and might apply all its monied resources at his pleasure."

President Bush may think his auto bailout spared his legacy a bad mark. In fact, it leaves America to be haunted by the precedent of an executive who unilaterally spends the people's money without the legal authority required by our Constitution.