Who Needs to Pay Their Mortgage and Who Doesn't? 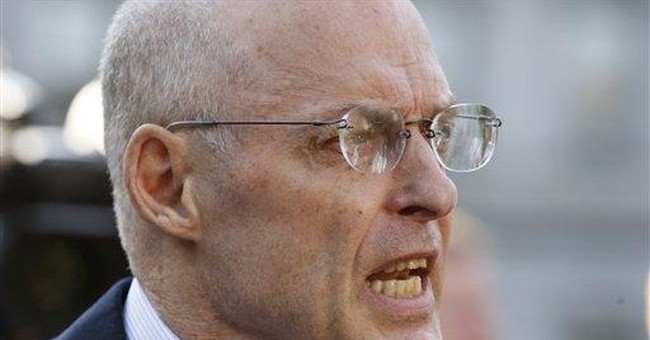 Will the U.S. Treasury Department help pay your mortgage or force you to help pay someone else's?

In the Great Bailout of 2008, on which side of the line do you, your home and your life savings sit? Are they in the land of individual responsibility, financial prudence and private property? Or in the land of government dependency, financial recklessness and expanding government control of the real-estate market?

Americans have been lectured ad nauseam over the past week by television news anchors, Wall Street analysts, the president, the secretary of the treasury, the presidential candidates and the leaders of both parties in the U.S. Congress that we have no choice but to bail out the financial industry by having the Treasury directly purchase up to $700 billion in mortgage-backed securities.

If we do not do this, we are told, the flow of credit will freeze. Businesses will not be able to borrow money. Payrolls will not be met. Bankruptcies will follow. The stock market will crash further than it already has. The life savings of Americans who actually save money will evaporate. A new Depression will be upon us.

And it will all be the fault of ignorant American taxpayers -- and conservative Republican congressional backbenchers -- who lack the sophisticated understanding of the financial system so manifest among Wall Street bankers and leaders of the bipartisan elite in Washington, D.C.

The Wall Street-Washington establishment is sending taxpayers this message: Stop harping about our failed past policies and unbridled greed. We have put a gun to the head of the U.S. economy. If you don't give us what we want now, we will blow the economy away. We will kill all your hopes and dreams. We will wipe out the fruits of all your past work and sacrifice.

Unfortunately, there is some credibility in this threat. If credit runs dry, the economy will, too.

But do we really need to let the government borrow an additional $700 billion (it is already running a deficit) so it can hand the money over to Wall Street bankers in return for vast numbers of mortgages both good and bad?

Consider what the bailout bill that failed Monday envisioned the secretary of the treasury, and other federal agencies that ended up controlling these mortgages, doing with the bad ones.

"(T)he Federal property manager shall implement a plan that seeks to maximize assistance for homeowners," it said. "In the case of a residential mortgage loan, modifications made under paragraph (1) may include -- (A) reduction in interest rates; (B) reduction in loan principal; and (C) similar modifications."

What would this say to the people in the neighborhood who did not overextend themselves and who faithfully pay their mortgage every month? It would say: You're a fool. Your profligate neighbor took the wiser course.

And it would also say: Please keep paying your taxes on time because we may need your money to cover the $100,000 we just cut from your neighbor's mortgage.

So what is the alternative?

The Republican Study Committee, a group of about 100 conservatives in the U.S. House led by Rep. Jeb Hensarling of Texas, has proposed that the government insure all mortgage-backed securities instead of buying up the riskiest ones.

Under this scenario, institutions that hold mortgage-backed securities would need to buy federal insurance that guarantees them the principal and interest payments on any underlying mortgages that default. The insurance premiums would be risked-based, so securities that had more defaults would pay higher premiums. With this federal insurance behind them, the securities would be marketable again. The private organizations holding the mortgages would need to cut their own deals with those who don't pay their bills.