The Real Competition in China 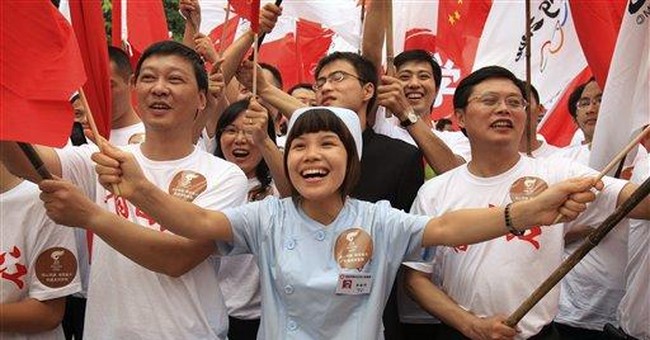 The eyes of the world will turn to China in the coming days to watch the Olympic Games. Far too few, however, will fix their attention on the greater competition for the soul of that country.

Here is a story about two champions in that contest, whose most dangerous race you did not see on TV.

Their story starts in Rome, in May of last year, when Pope Benedict XVI published a letter to the Catholics of China. In this letter, Benedict asked Catholics all around the world to set aside May 24 of each year as a day of prayer for the church in that country. He picked this date for a reason.

"This day is dedicated to the liturgical memorial of Our Lady, Help of Christians, who is venerated with great devotion at the Marian Shrine of Sheshan in Shanghai," said the pope.

This shrine is a beautiful church that sits atop a hill -- a conspicuous reminder of an illegal faith.

Five decades ago, China's communist regime outlawed the Roman Catholic Church, builder of the shrine. Since 1957, the regime has run a rival organization called the Chinese Catholic Patriotic Association. This "association" does not recognize the religious authority of the pope, and its bishops are appointed by the government.

Chinese bishops, priests and laymen in full union with the Roman Catholic Church have been forced into an "underground."

This May, Pope Benedict published a prayer to our Lady of Sheshan whose final lines must have been particularly poignant for these underground Catholics.

"In the statue overlooking the Shrine, you lift your Son on high, offering him to the world with open arms and a gesture of love," says Benedict's prayer. "Help Catholics always be credible witnesses to this love, ever clinging to the rock of Peter on which the Church is built."

In this spirit, many Chinese Catholics hoped to pilgrimage to Sheshan on May 24. The regime in Beijing, however, forbade all but a few from going.

Joseph Kung, president of the Connecticut-based Cardinal Kung Foundation, which closely monitors the Catholic Church in China, explained what happened.

Two underground Catholic priests from Xuanhua in Hebei Province decided to go anyway, Kung later learned. Forty-two-year-old Father Zhang Jianlin was intercepted by security police as he journeyed through Nanking. He was sent back to Xuanhua, then arrested. Forty-five-year-old Father Zhangli did not even leave Xuanhua. He simply announced he intended to go to Sheshan, and the authorities came and took him someplace else.

On July 13, the Cardinal Kung Foundation put out a press release about Fathers Zhang and Zhangli.

"We have no idea where they are," Kung told me. "We hope that by our press release we will put some pressure on the authorities, and before they decide what to do with them, they will think twice about it."

In China, priests and bishops routinely are arrested or disappear.

"Harassment of unregistered Catholic bishops, priests and laypersons continued, including government surveillance and detentions," the State Department said in its most recent human-rights report on China, which was released in March.

"There are approximately 35 underground bishops in China," the Cardinal Kung Foundation reports. "Every one of them is either in prison, disappeared, under house arrest or under surveillance."

I asked Kung -- whose late uncle, Cardinal Ignatius Kung, spent three decades imprisoned by China's communist regime -- what Americans could do to help.

"The media people should talk more about the religious persecution in China," he said. "They should let the world know what is going on in China regarding the persecution of religious believers, not only for the Roman Catholic Church but for all the churches. The media is not doing its job, its duty."