Suzanne Fields
|
Posted: Aug 23, 2019 12:01 AM
Share   Tweet
The opinions expressed by columnists are their own and do not necessarily represent the views of Townhall.com. 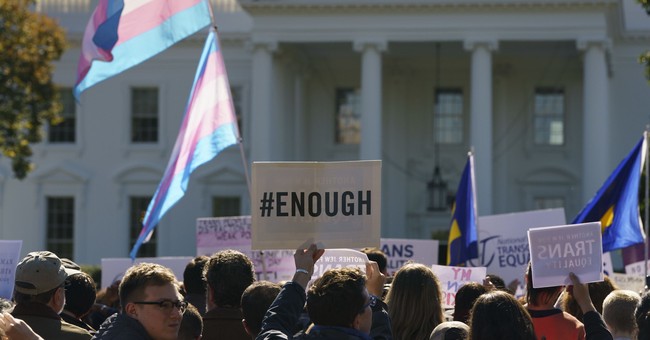 Sex and gender are serious subjects, but academics, pundits and the pop media have so stretched their meanings to use as weapons of political persuasion that the words sometimes don't mean very much. Communication becomes confusion and distraction.

The worst is when we're told to be blind to the obvious differences of the sexes because "identity," not biology, determines who we are. A society functions best when it uses conventional generalizations about sex and gender, as long as it acknowledges the prejudices that work against the exceptions among us. We can accept how biology determines who we are if we understand that common humanity includes variations on a theme. Tolerance of others is required.

But the culture is so polarized; the politics have become so fierce; and we've become so accustomed to the mean and ugly in the Age of Trump that common sense is banished to the margins, and beyond.

In the transgender debates, arguments usually focus on the so-called prejudice of young girls (and their parents) and young women who resist sharing a restroom or locker room with someone who now "identifies" as female but has kept what my 4-year-old grandson calls his "dingle." The natural modesty of the female of the species doesn't make such girls and women bigots, as they are frequently called. Choosing modesty over exposure in a restroom with men is, after all, one of the most private experiences of biological determination. What female modesty demonstrates is sensitivity to sexual differences that are accepted all around us in nature, literature, art and even advertisements. These differences have been ratified in small signs on restroom doors all over the world -- everyone knows what illustrations of skirts and trousers, bonnets and fedoras, cowgirls and cowboys are intended to convey. Fig leaves aren't fanciful.

Legal protections are important, and so is respect for those who suffer through a sex change, but 99 percent of the population shouldn't have to adjust morality and manners that flow from our basic understanding of sexuality to accommodate the less than 1 percent who want to sample a new identity. Language should be precise. Bloated language encourages prejudice. The culture shouldn't be put at the mercy of entertainers and athletes -- often with little understanding of anything beyond the stage or arena -- who promote boycotts over bathroom bills to draw attention to themselves.

Nor should we enable the ridiculous and the unfair in small-time sports where the kids live. Transgender males (with and without a dingle) are competing unfairly in weightlifting, track, cycling, wrestling and even mixed martial arts. They're bringing their faster speed, greater muscle mass and larger bone structure to compete against women with lesser muscle mass and smaller bone structure. This is, by definition, unfair.

There's a fault line in feminism, too, with denigration of certain things that women are equipped to do better than men. In her moving memoir, "The Rules Do Not Apply," Ariel Levy argues that despite gains in "third-wave feminism," women still can't have what they want in the way a man can. She writes in brutally honest terms about a miscarriage that brought out instincts of maternalism and feelings of tragic loss that surprised her.

Levy was married to a woman and five months pregnant, having been impregnated with a friend's sperm, when she lost her baby, delivering it alone in a hotel room in Mongolia, where she was on a reporting trip. The juxtaposition of the subject she was researching -- a Mongolian economy based on yak meat and goat hair that was transformed as miners replaced yaks and goats -- sounds remote and a little absurd as she reflects on how her dying son pushed himself out of her body like an "unholy storm," moving his tiny arms and legs that were as "pretty as a seashell." She shared only his brief whispers of a life but said, "there is no adventure I would have traded them for."

She was reassured that the long plane ride to Mongolia did not cause the miscarriage, but the reason why may have been related to her age (she was 38). She's skeptical now of the feminism that fails to tell young women who pursue careers that certain things about their bodies do have a sell-by date.

Her powerful pen has struck a nerve with many millennial women who are now reconsidering birth options. In an episode of the HBO series "Girls," one of the privileged, decadent young millennials in Brooklyn, portrayed by Lena Dunham, becomes pregnant in a casual affair. She is overwhelmed with sadness when the father tells her how pleased he is that she wants nothing from him. Sex and gender become more than manipulated words.