No Bullying This First Lady

Suzanne Fields
|
Posted: Aug 24, 2018 12:01 AM
Share   Tweet
The opinions expressed by columnists are their own and do not necessarily represent the views of Townhall.com. 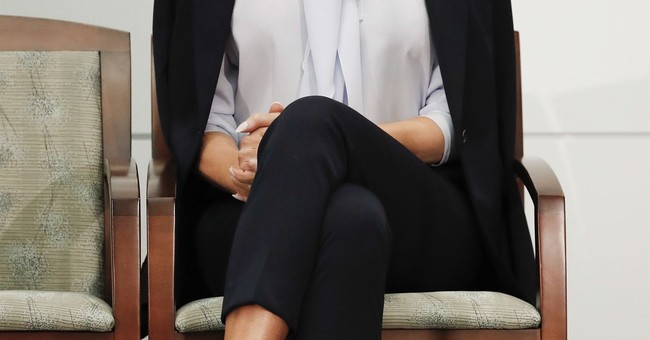 Melania Trump walked into a conference the other day to summon attention to her first lady's project, using her own "bully pulpit" to curb cyberbullying of children. Who wouldn't report with respectful appreciation what the woman was saying about a major problem confronting our children today? She found out who wouldn't after receiving an onslaught of online bullying for daring to separate herself from her husband's political attack style.

One disappointed critic suggested that the first lady suffers from brain damage. "(G)irlfriend's lack of self-awareness & any sense of shame for her husband's use of the Presidency to bully others, is hard to ignore," tweeted Ana Navarro of CNN. "Only plausible explanation here is, Melania suffered oxygen deprivation to the brain."

There was the inevitable Hitler comparison, this time to der Feuher's wife. "First Lady Melania Trump hosting an anti-bullying event is like Eva Braun hosting a Bat Miztvah," tweeted Holly Figueroa O'Reilly, a songwriter and national co-organizer of the March for Truth movement.

The internet lit up with accusations that Trump was trolling for her husband.

Criticism, of course, is inevitable for a first lady who tries to move out on her own from getting attention because she's the ultimate "wife of" and thin, beautiful and rich. Nancy Reagan was ridiculed for her anti-drug motto, "Just Say No," and trying to appeal to a generation that was dying of drugs and addiction, when her friends in Hollywood were snorting as much cocaine as they could afford (which was a lot). Michelle Obama, who tried to get kids to eat their vegetables, was derided as out of touch with multicultural kids who wanted to get fat on tortillas, pizza, biscuits and bagels. It was her "Let 'em eat tofu" moment.

Nastiness toward the first lady comes with the territory, and with the advent of social media, where there are no gatekeepers and anybody with two thumbs can tweet for attention, the more vicious insult and vitriol the better. Nevertheless, comparing President Trump's political rhetoric aimed at his critics to a first lady's concern for children and encouragement of them learning how to respectfully use their tools of technology is to overlook the power of her bully pulpit on behalf of children.

Stephanie Grisham, communications director for the first lady, says that Trump is aware of the anger directed at her, but "it will not deter her from doing what she feels is right." She's speaking as a mother and first lady, and being both makes her acutely aware of what she sees as "today's fast-paced and ever-connected world," where children are particularly vulnerable and turn to forms of destructive and addictive behavior online.

Bullying is only part of the problem for children on the internet, and the first lady deserves credit for drawing attention to an issue that is specific, hurtful and harmful.

"Eighth Grade" is the popular new movie about the first generation growing up in the omnipresent cyberworld, where navigational familiarity with the digital culture is required for survival. It shows the memorable pitfalls of coming of age, seen through a screen, darkly.

If Donald Trump is our first tweeting president, Melania Trump is the first first lady to recognize the internet as an obstacle course that children must learn to run. Kayla, the "Eighth Grade" protagonist, is today's Everygirl who must discover who she is through the tiny screen she holds in her hand. The movie portrays the Brave New World of cyberspace as neither utopian nor dystopian, but for an adolescent, as life itself. Kayla ignores her immediate surroundings for a digital conversation and consequently suffers slings and arrows of outrageous fortune determined by texts and videos.

The psychology of growing up is squeezed into a small hand-held device that absorbs all the energy in a room and revises Descartes' famous philosophical observation to "I watch therefore I am."

The director, Bo Burnham, grew up making frequent appearances in videos on YouTube. He knows the world he describes, and for adult generations that suffer through the distracted conversations with adolescents attached to cellphones, it's probably required viewing. It expresses the promise and pain of the new means of communication and shows how the digital format is now the dominant form for reaching children.

"Let's face it," Trump told the summit on cyberbullying, "most children are more aware of the benefits and pitfalls of social media than some adults." She encourages social media and technology companies to make more opportunities for young people to share positive ideas for how to be good citizens online. "By listening to children's ideas and concerns, I believe adults will be better able to help them navigate this often-difficult topic."

That requires more than cyberbullying by adults who should know better.