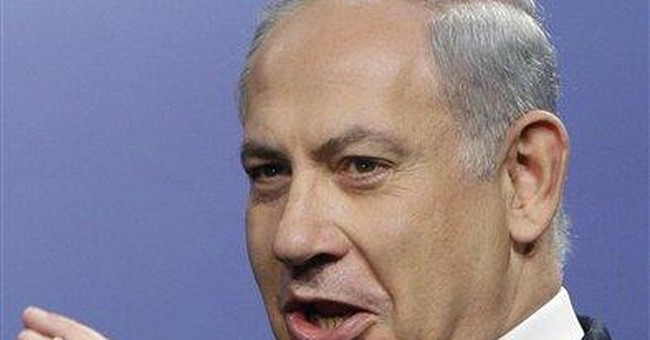 If a photograph is worth a thousand words, a sharp newspaper cartoon is often worth the book. One Israeli cartoonist depicts Prime Minister Benjamin Netanyahu and the missus arriving at the White House to meet with Barack Obama. Mrs. Netanyahu knocks at the front door with the explanation, "We just happened to be in the neighborhood." Another cartoon depicts the prime minister pulling up at the White House, and telling the driver to wait: "I'm not sure they're at home."

With a few strokes of pen and brush, the cartoonists capture the prevailing Israeli dismay, frustration and controlled fury at President Obama's reluctance to meet the prime minister, who was in Washington this week. The administration wanted to punish Israel by setting "pre-conditions" for talks and for not having a more "conciliatory" attitude toward those who vow to "wipe the Jewish nation off the map."

On the street and at higher levels, Israelis look back in anger, observing that the president set no "pre-conditions" before meeting Mahmoud Ahmadinejad, the president of Iran, who is on the way to building a nuclear weapon to put Israel in mortal danger. The Israelis say Obama wants to extract an opening promise to freeze settlements on the West Bank and East Jerusalem, something that's never been a pre-condition for starting talks.

The prime minister was eventually invited into the Oval Office for a brief "low-key" exchange, but without the customary photo op afterward. This president does not offer the strong handshake of friendship that Bill Clinton and George W. extended to previous Israeli prime ministers. President Obama says "America's bond with our Israeli allies is unbreakable," but it sounds more like the lip service paid by Jimmy Carter.

President Obama shows none of the instinctive affection for Israel or understanding of the history of the Jewish state. This is not lost on the Israelis, who have to cultivate long memories as a survival strategy. They're not as sanguine as American Jews who voted in enormous numbers for Obama despite his long associations with those who wish Israel only ill.

They remember how Obama apparently slept through two decades of Sunday morning rants by the Rev. Jeremiah Wright, citing chapter and verse of his accusations that Israel committed "genocide" against the Palestinians. They remember that the president once cited as his "mentor" Rashid Khalidi, the professor at Columbia University who frequently denounces Israel as "a racist state" and defends Palestinian suicide bombers.

Many Israelis are puzzled by how American Jews give the president a passing grade on the kishke test, using the Yiddish word for "gut." Zbigniew Brzezinski, who worked as a senior campaign adviser to Obama, even urged the president to shoot down Israeli planes if they fly over Iraq on their way to bomb the Iranian nuclear sites. John McCain, on the other hand, said "the only thing worse than bombing Iran is letting Iran get the bomb." Obama defeated McCain by 57 points among Jewish voters.

A growing number of Jewish voices are asking how, if Jews are so smart, can this be? Norman Podhoretz, one of the most prominent Jewish voices in America, talked about his new book, "Why Are Jews Liberal?" the other day at the Hudson Institute in Washington. The question is especially timely against the backdrop of the '08 campaign, given that Obama captured 78 percent of the Jewish vote, and continues to espouse positions, sometimes subtly and sometimes not so subtly, which conflict sharply with what most American Jews say they want for Israel.

I asked Podhoretz what the Israeli prime minister might say to the president about the unchecked threat by Iran. "The Jewish people have existed for 3,500 years, a long rich history, and only yesterday overcame a very serious, determined threat to end its existence," he replied, as if channeling Benjamin Netanyahu speaking to Barack Obama. "Now we have another very serious threat to annihilate (the Jews) by a country that is rapidly acquiring the means to make good on that threat. I, as prime minister of Israel, have accepted the intolerably heavy burden of deciding whether I will preside over the end of the Jewish people, the end of this 3,500 year history, and I will take admittedly dangerous and risky steps in order to prevent this. I ask you not to try to prevent me from making this effort if I have to make it, which I fear I might."

Does he think such words, if spoken by the prime minister to the president, would be persuasive? No, he said. Not really. Such words would fall on "deaf ears." And he still wouldn't get his Oval Office photo-op, either.