Obama's Bummer of a Summer 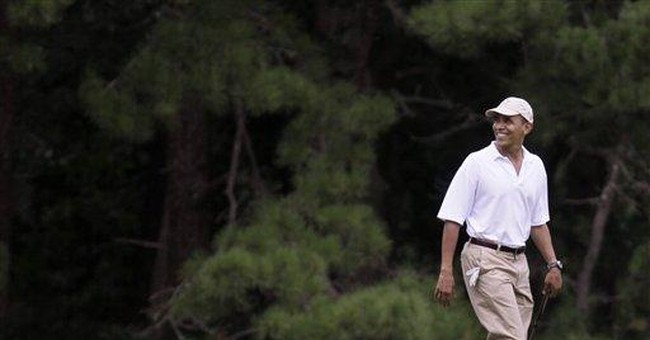 This is everybody's bummer of a season, particularly these rough weeks for Barack Obama. You could call this a summer of discontent, but there's nothing poetic about it. The president warns that the economy will only get considerably worse before it gets better.

"The long-term deficit outlook remains daunting," the White House said Tuesday. Unemployment is expected to surpass 10 percent soon, the deficit to swell to $1.5 trillion, and the gross domestic product to shrink by 2.8 percent this year. We may get an early frost, too.

The stimulus was supposed to make everybody feel a lot better by now. The deficit would be smaller, Wall Street greed would be tamed, and General Motors would be selling cars again without federal subsidies. The health care debate would be over, with legislation signed. But senior Democrats are saying now there will be no health care scheme in place before Christmas, if then, and nobody knows what it would look like, anyway.

The good news is that the U.S.A. is still the Old Reliable, rebounding with poise, grace and growing confidence, just as it always does. That's because we're not the nation Obama and his friends on the left imagine we are, permanently susceptible to the blandishments of big talk and the music of seductive pipers, willing to be remade in the image of the Old and Third Worlds. America is unique -- "the last best hope of civilization," as Abraham Lincoln put it -- and this is the idea a community organizer and his friends from the '60s just can't get their minds around.

In getting itself turned right side up again, the public is beginning to see the Obama phenomenon for what it was, a vaporous display of fluffy clouds, soft and inviting, streaked with a nifty rainbow. He cleverly put together a coalition of '60s radicals, aging but still dreaming of a socialist paradise, antiwar dreamers who think apologies will subdue the violence of those who hate us, white liberals who imagined that electing a black president would relieve them of guilt for things they both did and didn't do, and black voters understandably eager to finally vote for one of their own (just as white Southerners eagerly took a chance with Jimmy Carter).

Obama's genius is his ability to read an electorate weary of war, weary of a world that seemed not to like us very much and weary of presidents named Bush. He inherited the possibilities in a perfect storm.

Sometimes the cultural instincts of Middle America seem to be missing in Obama; he's the son, after all, of a Kenyan father and an American mother who spent her adult life trying to get away from America. It's impossible to imagine Barack Obama hitting all the notes (or knowing all the words) in a hymn to "morning in America." But he understood that if he intended to remake America in a way that few Americans could tolerate he had better do it before the fat lady sings. He knew that the magic of the campaign of '08 would eventually flee.

What he didn't expect was how quickly the magic would flee, how quickly the public would awaken and how fiercely the awakening public would answer the golden con. The public saw that Obama's idea of the overhaul of health care was the first step in overhauling everything, and if the public was surprised, the president was equally surprised by the "loud voices" of the town halls.

Suddenly railing at the sins and shortcomings of George W. Bush, both real and imagined, is not enough. The heartaches and headaches of the presidency are his now, and he is clearly astonished that the unique responsibilities of a president can't be eased by spending a few minutes with an adoring press, making a speech or dispensing an apology to a distant enemy.

The "loud voices" that bedevil the dreams of the president have served notice, as Fouad Ajami, an international studies professor at Johns Hopkins University, writes in The Wall Street Journal, "that Mr. Obama's charismatic moment has passed. Once again, the belief in that American exception that set this nation apart from other lands is re-emerging."

That's very good news for the rest of us, but it's enough to ruin a day at the beach as a summer of discontent fades into the suspicions of September. Obama becomes less a man for all seasons than a man who must be watched closely when autumn leaves begin to fall.