Nightmares Are Dreams, Too

Susan Stamper Brown
|
Posted: Jan 12, 2016 12:01 AM
Share   Tweet
The opinions expressed by columnists are their own and do not necessarily represent the views of Townhall.com. 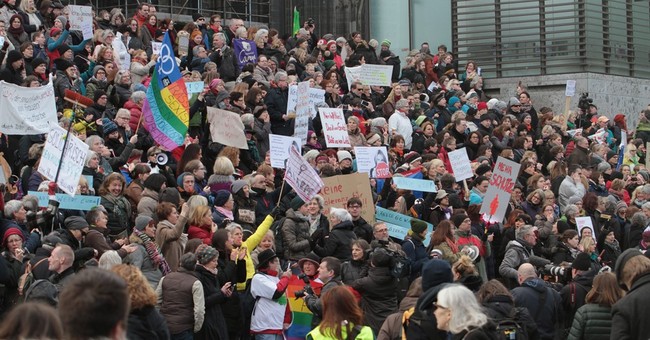 Over the holidays, Europeans were rudely awakened from their utopian dream of open borders and peaceful coexistence to discover, as Oscar Wilde once wrote, "...nightmares are dreams too."


Rape and personal crime are on the rise in Europe. The Courier-Mail reports that along with Germany, a rash of sexual assaults took place in Austria, Sweden and Finland on New Year's Eve. In Cologne, Germany alone, police received 120 criminal complaints with witnesses reporting that groups of 20-30 young men "who appeared to be of Arab origin," surrounded, sexually assaulted and sometimes robbed females.

Finnish police also reported an "unusually high level of sexual harassment in Helsinki, claiming they'd "been tipped off about plans by groups of asylum seekers to sexually harass women." Three rapes occurred at a rail station where witnesses contended that nearly 1,000 "mostly Iraqi asylum seekers" had converged. "This is a completely new phenomenon in Helsinki," told a Helsinki police officer. Six women in Zurich said they were "robbed, groped and molested" by "several dark-skinned men," an "unusually high number for Switzerland," police reported.

Rapes in Norway and Sweden "have skyrocketed in recent years as their Muslim refugee and migrant populations have soared," Examiner.com reports. Sweden, a place which once boasted that women could safely walk the streets at midnight is now known as "the rape capital of the West."

Norway officials are attempting to fix the problem with sensitivity classes for refugees coming from cultures where "women are the property of men," instructing them that Norway does not permit "forcing someone into sex...even when you are married to that person." "Under sharia," said the Examiner.com report, "it's OK to rape Norwegian and Swedish women because they are considered 'infidels.'"

A most telling August 14, 2015 New York Times piece, "ISIS enshrines a culture of rape," describes the rape of a 12-year-old Iraqi girl by an ISIS fighter who "took the time to explain that what he was about to do was not a sin. Because the preteen girl practiced a religion other than Islam, the Quran not only gave him the right to rape her - it condoned and encouraged it, he insisted."

While all the reports of sexual misconduct throughout Europe on New Years' Eve do not yet link an ISIS tie to the alleged accomplices, based on what occurred, it seems the patriarchal society they come from inspires similar beliefs as the account depicted in the Times report.

Might we be attempting the impossible to expect peaceful coexistence in this seismic clash of cultures?

America's sunk, unless we take immediate action. Two Palestinian men who came to the U.S. as refugees were arrested January 7, 2016. CNN reports that one was charged with "attempting to provide material support to ISIS," and the other, "for making a false statement involving international terrorism." Both are "accused of lying to immigration officials about their alleged ties to terrorist organizations."

Let us not forget, these arrests come on the heels of the San Bernardino ISIS-related attack. Large masses of Americans have voiced concerns that ISIS will indeed fulfill its promise to infiltrate our borders posing as refugees. And the arrests January 7 prove concerns are valid.

Unless we want what's happening across Europe to happen here, resettlement of these refugees must cease until we are guaranteed there will be true assimilation into the American way of life. America's daughters deserve no less. After all, it's really not that hard to assimilate, given one is willing to join the rest of us in the 21st Century, abide by America's laws, speak English, integrate, drop labels, work hard, respect our Judeo-Christian roots and love America.

At this point, though, it seems coexistence is but a dream; the kind of dream nightmares are made of.