Steve Soukup
|
Posted: Jan 14, 2018 12:01 AM
Share   Tweet
The opinions expressed by columnists are their own and do not necessarily represent the views of Townhall.com. 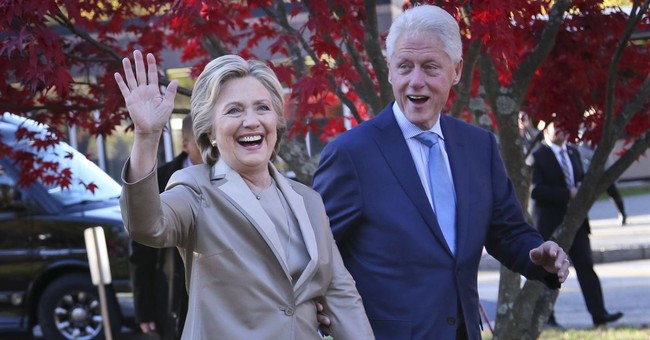 Shortly after winning the election, President Trump told the New York Times that he probably would not make good on his promise to pursue a new criminal investigation into Hillary Clinton’s many shady deals, from her email server to her campaign apparatus to her and Bill’s massive and well-connected foundation.  Trump declared that further investigation would be “very, very divisive for the country.”

Unfortunately for Hillary – and possibly for Bill as well – some things are beyond the control of even the most powerful man in the world.  Some conservative members of Congress may force the Justice Department to take action against Hillary et al, whether Trump likes it or not.

The response from the Leftists to the new allegations against Hillary Clinton and her campaign has been utterly predictable.“She did nothing wrong,” they proclaim, and to investigate her now reeks of banana republic-style abuse of the justice system.  But these Clinton defenders are mistaken on both counts.  Hillary Clinton did much wrong, and to investigate those wrongdoings is not necessarily political payback.  The questions raised by the ongoing various scandals are manifold, but perhaps the least asked and the rarely answered is the following:  would such an investigation be good or bad for the country?

President Trump, for his part, has already said that such an investigation would be divisive, and thus bad for the country, particularly at this moment of extraordinary tension.  One of Shakespeare’s most prominent and appealing heroines echoes Trump’s sentiments and argues them well. In The Merchant of Venice, Portia makes perhaps the most famous appeal to mercy in all of Western Civilization, pleading to Shylock about the nobility of said virtue, particularly when practiced by the mightiest among us.

The quality of mercy is not strain’d,

It droppeth as the gentle rain from heaven

Upon the place beneath: it is twice blest;

It blesseth him that gives and him that takes:

‘Tis mightiest in the mightiest: it becomes

The throned monarch better than his crown;

At the same time, however, no less than one of history’s greatest champions of justice and truth has argued that corruption itself is destructive and must be resisted.When the branches of a government are thought by the people to be deeply corrupt, the leaders of said government would be wise to take any opportunity to prove otherwise.  In 70 B.C., the Roman Republic was deeply corrupt, as many believe the United States is today.  Marcus Tullius Cicero was then the prosecutor in a trial before the Senate, in which the Gaius Verres, the governor of Sicily, was charged with wholesale corruption.Like the Clintons today, Verres was rich and powerful.

Cicero took the floor to proclaim:

At this grave crisis in the history of our country, you have been offered a peculiarly desirable gift, a gift almost too opportune to be of human origin:  it almost seems heaven-sent.  For you have been given a unique chance to make your Senatorial Order less unpopular, and to set right the damaged reputation of these courts.  A belief has taken root which is having a fatal effect on our nation – and which to us who are Senators, in particular, threatens grave peril.  This belief is on everyone’s tongue, at Rome and even in foreign countries.  It is this: that in these courts with their present membership, even the worst criminal will never be convicted provided that he has money.”

"That, then, is the dangerous crisis with which your Order and your courts are faced.  Speeches have been prepared, laws drafted, with the purpose of inflaming still further this hatred that already rages against the Senate.  And at this very juncture Gaius Verres has been brought to trial.  Here is a man whose life and actions the world has already condemned – yet whose enormous fortune, according to his own loudly expressed hopes, has already brought him acquittal!  I, gentlemen, am his prosecutor, and the people of Rome are strongly and confidently on my side.  To increase the unpopularity of your Order is very far from my intention.  On the contrary, I am eager to remove your bad reputation – which is as much mine as yours.  And the defendant whom I am prosecuting, being the man he is, provides you with your opportunity to recover the lost prestige of these courts and to regain the favour of Romans and the outside world alike.

Verres has sacked the Treasury.  He has devastated Asia and Pamphylia.  His tenure of the city-praetorship was a record of robberies; and the province of Sicily found him an annihilating pestilence.Pronounce a just and scrupulous verdict against Verres, and you will keep the good name which ought always to be yours.  Let us imagine, on the other hand, that his great wealth succeeds in undermining the conscience and honesty of the judges.  Well, even then I shall accomplish one thing.  For the general conclusion will not be that the judges failed to find a guilty defendant – or that the defendant lacked a competent prosecutor.  On the contrary: the deduction will be that there are no good judges in the land."

Cicero was right, of course, as even Verres conceded, leaving the country voluntarily.  Magnanimity and mercy are useful and important virtues.But in this case, the very reputation of our republic, that which Abraham Lincoln called the last, best hope of man, may well be at stake.  We love Portia, but the Clintons’ wrongdoing must be pursued.  And if it’s proved as well, they must be punished.  All the mercy in the world cannot buy back the loss of honor, integrity, and equality before the law.