Steve Chapman
|
Posted: Oct 28, 2017 12:01 AM
Share   Tweet
The opinions expressed by columnists are their own and do not necessarily represent the views of Townhall.com. 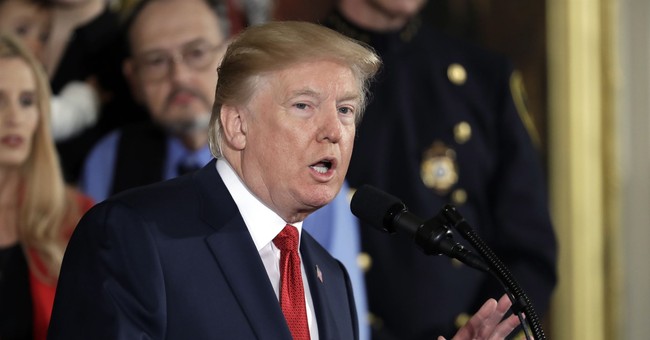 You'd think it would be impossible to kill 100 people a day, every day, without inducing widespread shock and deafening demands for action. But that's what opioids have been doing for the past decade, and Americans have given it only passing attention. This year, the toll is expected to rise to 175 a day, 64,000 in all.

On Thursday, it looked as though President Donald Trump would address the problem with the urgency it demands. But his speech was blighted by his usual oratorical crimes: deep self-infatuation ("I've never had a drink"), bloated adjectives ("tremendous," "horrible"), cheap promises (changes "will come very, very fast") and swipes at President Barack Obama ("not like in the past").

Trump went through a roster of fraudulent cures, such as building a border wall, demanding that China crack down on shipments of the powerful opioid fentanyl, and "really tough, really big, really great advertising" to discourage drug use.

We know from experience that no amount of enforcement can stamp out the demand for or the supply of illicit substances. If fentanyl stopped arriving from China, which isn't likely, it would soon pour in from black-market labs in other countries, including this one.

Anti-drug ads are irrelevant to those who develop a dependence on opioids prescribed for severe pain. And people in communities where opioid-laced corpses are piling up don't need to be informed that these drugs are dangerous.

The public health offensive Trump declared is mostly a form of yoga: lots of posturing while staying in one place. More innovative remedies will be needed to actually turn back the relentless onslaught of overdose fatalities.

Some people around the president are better connected to reality. On Wednesday, the commissioner of the Food and Drug Administration acknowledged to a House committee that the biggest need is a huge expansion of treatment for those dependent on opioids.

Scott Gottlieb testified that therapies using methadone or buprenorphine have been proved safe and effective in combating addiction. Massachusetts, for example, found that they cut the risk of death by overdose by 50 percent among people who had survived previous overdoses.

But the remedy works only for those who get it. "Unfortunately, far too few people who are addicted to opioids are offered an adequate chance for treatment that uses medications," Gottlieb said. He intends to encourage doctors to offer such remedies for anyone who is treated for an overdose.

He hopes to banish the stigma of being on methadone or buprenorphine and get people to recognize that a patient's medication-assisted treatment may last indefinitely, if not forever. We don't think diabetics should conquer their need for insulin. Why suppose that heroin addicts who are successfully treated with methadone should learn to live without it?

The FDA can help by preaching the value of medication-assisted treatment and encouraging health insurance companies to cover it. The commissioner said this task is "part of our existing public health mandate to promote the appropriate use of medicine."

Trump offered a couple of useful small ideas, including greater access to telemedicine services so that people in remote areas can get medications needed for drug treatment or mental illness, and letting states use HIV/AIDS funds for treatment. But the humane, evidence-based solutions generally got short shrift.

He would have done better to embrace the proposals of his Commission on Combating Drug Addiction and the Opioid Crisis, whose preliminary report stressed the need to "rapidly increase treatment capacity." Right now, it lamented, only ten percent of drug treatment facilities offer medication-assisted treatment for opioid dependence.

The commission, chaired by New Jersey Gov. Chris Christie, recommended making it easier for states to use federal Medicaid funds for treatment. It urged the federal government to expand access to methadone and other drug therapies through Medicare, the Department of Veterans Affairs, the Indian Health Service and correctional facilities.

Dismantling regulatory barriers would also help. The Drug Policy Alliance says one big obstacle to treatment lies in rules limiting patients to one local facility that they have to visit every day for methadone instead of letting them get it in their doctors' offices. Restrictions on how many buprenorphine patients a physician can have also get in the way.

But the president himself has settled mostly for mild variations on tactics that have been tried without conspicuous success. Trump came to Washington promising to shred the status quo. But when it comes to opioids, the status quo has nothing to fear.