Steve Chapman
|
Posted: Oct 01, 2017 12:01 AM
Share   Tweet
The opinions expressed by columnists are their own and do not necessarily represent the views of Townhall.com. 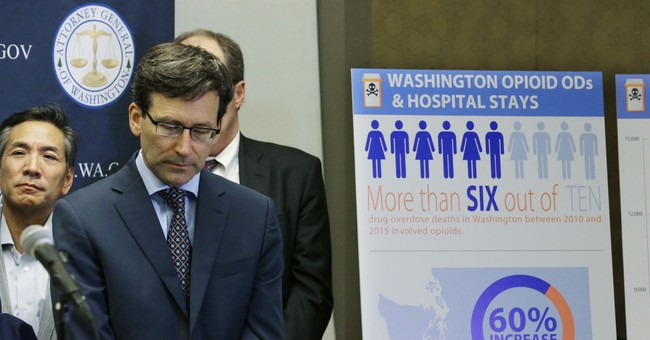 Editor's Note: The following column is by Diane Dimond.

Every action has a reaction, and every decision has a consequence. Remember that lesson you learned early in life?

A funny thing happened on the way to introducing naloxone to the world of drug addicts. Experts in the field decided this antidote to nearly fatal drug overdoses was a modern-day miracle that would save lives and help steer drug abusers back from the brink. Once saved, they opined, the addict could then seek meaningful treatment.

With that endorsement, the push was on to try to get every ambulance and law enforcement officer to carry doses of the drug, widely known by the name Narcan, which is a brand name for a device that delivers naloxone. Emergency medical technicians were given vials of naloxone to inject into overdosed addicts. Beat cops got nasal spray doses to administer while waiting for an ambulance. Both proved to be highly successful in bringing addicts back to consciousness.

Regulation of naloxone varies by state. In 2010, Quincy, Massachusetts, became the first municipality to require its police officers to carry naloxone. Earlier this year, New Mexico became the first state to mandate that each and every law enforcement officer be equipped with naloxone. And other states are broadening the public availability of the drug. Today it is not hard for addicts, their friends or their family members to get take-home doses -- with or without a prescription -- at doctors' offices, pharmacies or community clinics.

Without a doubt, countless thousands have had their lives saved with a dose of naloxone. But then what? Reports from the front lines make clear that reviving an overdosed patient does not lead the patient to suddenly seek a sober lifestyle. Furthermore, the widespread availability of this antidote has made many addicts feel invincible.

"We gave Narcan to one particular addict 20 times in one month," an EMT from a rural upstate New York town told me recently. "And the parents don't care. They just keep calling us to revive their kid."

Naloxone is amazing. It brings back to life addicts who look lifeless -- their lips blue, their breathing nearly undetectable. It works by surrounding opioid receptors in the brain, spine and gut and blocking the effect of narcotics. What the nonchalant drug abuser may not know is that naloxone also causes severe withdrawal symptoms, which all but guarantees that a user will be left with a massive desire to quickly find another fix to stop the pain.

In Ohio, where the opioid epidemic led to more than 4,100 overdoses last year, one emergency room physician has openly worried about the increasing use of naloxone.

"It's such a frustrating problem," Lisa Deranek said. "We're saving lives, but it's only temporary." Repeat overdose patients are common. "Just throwing Narcan on this opioid fire is not going to fix it, (but) I'm afraid the government thinks it is."

The National Survey on Drug Use and Health reports that in 2014, over 7 million Americans were struggling with a drug abuse disorder. The Centers for Disease Control and Prevention reports that more than a half-million people died of drug overdoses between 2000 and 2015. This is a complex problem to tackle.

Simply put, naloxone is not the panacea advocates hoped it would be. And for law enforcement officials, it highlights just one more societal problem heaped upon them to deal with.

"It's just reviving somebody who's going to go back and get high the same day," said Sheriff Richard Jones of Butler County, Ohio. "It's a war that we're losing."

The unsolved problem, of course, is this country's inability to effectively treat drug addiction on a broad scale.

Interestingly, as the nation's overdose problem has increased, so has the cost of naloxone. In 2014, the price was about $19 a vial. By late 2015, the price of a package of two prefilled auto-injectors had jumped to $900. By February 2016, that had skyrocketed to $4,500. The prescription tracking company IMS Health concluded that naloxone sales nearly quadrupled in recent years, from $21.3 million in 2011 to $81.9 million in 2015.

Think what bona fide drug treatment programs could do with an infusion of $81 million. Rather than spend that much money to slap a temporary Band-Aid on a problem, wouldn't it be smarter to divert at least some of those funds to programs that could help addicts wean themselves back to health? Seems like a no-brainer.

Yes, decisions have consequences. It's pretty clear now that sinking tens of millions into a path that doesn't reduce the number of addicts in America was more than just a bad idea. It was a mistake.

To find out more about Diane Dimond, visit her website at www.dianedimond.com. Her latest book, "Thinking Outside the Crime and Justice Box," is available on Amazon.com. To read features by other Creators Syndicate writers and cartoonists, visit the Creators Syndicate webpage at www.creators.com.