Steve Chapman
|
Posted: Mar 12, 2017 12:01 AM
Share   Tweet
The opinions expressed by columnists are their own and do not necessarily represent the views of Townhall.com. 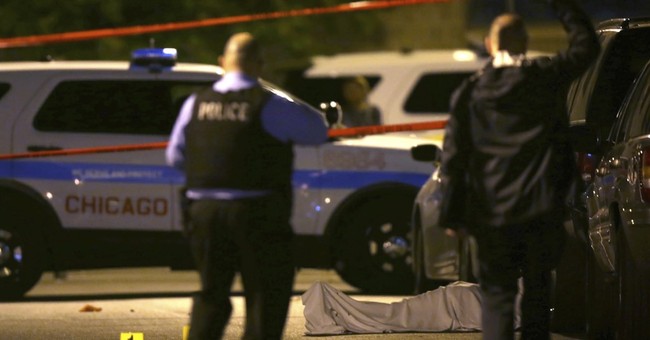 Trending
With violent crime surging in Chicago, the Trump administration rejects the idea of police restraint. During the campaign, Donald Trump said the answer is for cops here to be "very much tougher." In his recent address to Congress, he decried violence in Chicago and promised to "work with -- not against, not against -- the men and women of law enforcement."

Attorney General Jeff Sessions agrees that the cops are always right. Last year, the Obama Department of Justice published a damning report on the Chicago Police Department, which concluded that its officers "engage in a pattern or practice of using force, including deadly force, that is unreasonable," as well as unconstitutional, creating unnecessary danger to themselves and innocent bystanders.

Asked last month whether he would pursue reforms in response to the abuses and errors cited in the report, Sessions said he hadn't read it. He also said the increase in crime has occurred because "we've undermined the respect for our police and made, oftentimes, their job more difficult."

Anyone who has taken the trouble to read the Justice Department report on Chicago can see that bad police are the ones who really undermine that respect.

One notorious example is the 2014 shooting of 17-year-old Laquan McDonald as he walked away from officers while holding a knife -- a killing the police excused and lied about. The video exposing the truth was released in November 2015. The spike in crime began soon after.

There are plenty of other cases. When one unarmed man ran away after being approached by cops, they fired 45 rounds at him, killing him. A cop choked, hit and slapped a man "who had refused to leave the area in front of a store where the man was shopping with his family" -- and the cop then denied using force. Black teenagers told of being picked up by cops and dropped off in rival gang areas.

It's not only the Justice Department that has found that Chicago police engage in needless brutality. Crain's Chicago Business reported last year that misconduct cases have cost the city $662 million in judgments, settlements and outside legal fees since 2004.

If ferocious methods were the solution to crime, Chicago would be suffering a shortage of criminals. Even before last year's jump, though, its homicide rate far surpassed those of New York and Los Angeles.

But when cops misuse their authority, residents of high-crime areas regard them as an occupying force they should fear, not an ally they should assist. A Chicago Tribune poll last year found that only 20 percent of Chicagoans think the police "treat all citizens fairly."

Police use of force is often unnecessary and counterproductive. When police act with restraint, they can get better results. The Los Angeles Police Department once had a reputation as vicious and corrupt. But reforms carried out under a 2000 consent decree with the Justice Department have made a huge difference.

Between 1991 and 2009, public approval of the LAPD rose from 40 percent to 77 percent. But felons have not been running wild. Since the consent decree took effect, crime has plunged by more than half. Last year, Chicago had 762 homicides, while Los Angeles, with a larger population, had 294.

In his new book, "When Police Kill," University of California, Berkeley law professor Franklin Zimring notes that Philadelphia drastically reduced the number of civilian deaths at the hands of police -- from 15 in 2007 to four in 2014 and two in 2015. Yet the crime rate last year was the lowest the city had seen since 1979. Philadelphia, like Los Angeles, is proof that more restraint does not equal more crime.

The New York experience offers additional confirmation. Between 2011 and 2015, the NYPD reduced the number of street stops by 97 percent. In that period, the number of murders dropped by a third.

What should be clear from all this is that when police go to war against their citizens, they provoke hostility and distrust that undermine their mission. When they exercise greater care in dealing with those they encounter, they may find that their job gets easier and safer.

When a federal court lifted the consent decree on the LAPD in 2013, Chief Charlie Beck said: "It has been the catalyst for incredible change in my police department. We've become accountable. We've become transparent. And we've become more effective than we've ever been." For Chicago, changes like those sound crazy, but they just might work.