Why Are Democrats Cozy with the Clintons? 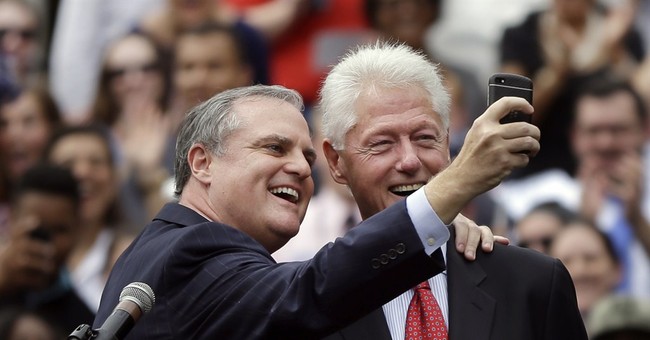 It's not surprising that many Democrats running for major offices this year would prefer not to sidle up to a president who has a record of raising taxes, pushing a federal health care overhaul, embracing action against climate change, talking about divisive racial issues and cutting defense spending. But they have asked him to campaign for them anyway.

By "him," of course, I mean Bill Clinton. What? You thought I was talking about Barack Obama?

It may be hard for young voters to believe that once upon a time, Clinton was demonized as an incorrigible liberal who threatened the nation with military weakness, socialized health care and job-killing environmental rules -- not to mention being a vile sexual predator. Republicans detested, vilified and finally impeached him.

His wife was regarded as equally polarizing but even further to the left. Yet today, Democrats who would rather clean up after Ebola patients than appear with Obama are handcuffing themselves to the former president and first lady.

Kentucky Senate candidate Alison Lundergan Grimes refuses to say whether she voted for Obama, while bragging that she cast a primary ballot for Hillary Clinton in 2008. Grimes even persuaded Bill to do a TV ad for her.

He has been campaigning elsewhere, too, from Arkansas to Michigan to New Hampshire. What is true of the Bluegrass State is true of other places. "Kentucky voters identified with Mr. Clinton because of his rural Arkansas roots and centrist politics," reports The New York Times -- forgetting that he never got more than 46 percent of the vote there in his presidential races.

Hillary, for her part, benefits not just from being the wife of Bill, but from having run against Obama in 2008. "Her popularity and motivational sway with women voters -- certainly a, and arguably (SET ITAL) the (END ITAL), critical swing constituency in many contested Senate races -- is significant, as is her fund-raising prowess," wrote John Heilemann of Bloomberg Politics. Even in red states, her liberal history is no big deal.

That's one of the odd things. You don't have to be a Republican to admit that Sen. Mitch McConnell, Grimes' opponent, had a point when he said: "There's not a dime's worth of difference between a Clinton Democrat and an Obama Democrat."

Amid the campaign hoopla, you could almost forget that Hillary Clinton spent four years as Obama's secretary of state, arguably the most important position in the Cabinet. Or that she said his approval of the operation to get Osama bin Laden "was as crisp and courageous a display of leadership as I've ever seen." Or that she applauded his decision to send Attorney General Eric Holder to Ferguson, Mo. Or that she has urged Democrats to run on Obamacare.

She and her husband have had occasional differences with the president, like her complaint that his "failure" to help Syrian rebels led to the rise of the Islamic State. But not too much should be made of that.

They do not bother reminding voters that the Clinton administration got grief from hawks on similar grounds. President Clinton was faulted for retreating from Somalia after the "Black Hawk Down" debacle and for repeatedly evading military intervention in the Balkans.

_He drove interventionists to despair by refusing to send troops to prevent genocide in Rwanda. He was accused of giving too little attention to the danger posed by a shadowy group called al-Qaida. When he left office, the neoconservative Weekly Standard cover said, "Our Long National Nightmare Is Over."

Hillary would be more inclined to use military force than Obama, but that doesn't mean the GOP would support her. When her husband undertook a bombing campaign against Serbia in 1999, House Republicans defeated a resolution authorizing it. If you think she has a lot in common with conservatives on foreign affairs, I have one word for you: Benghazi.

Some of the appeal of the Clintons, particularly in the South, lies in an obvious difference with Obama: skin color. The New York Times noted "Obama's trouble in attracting traditional Democratic voters." No Democratic voters are more loyal than African-Americans, but it's whites who get labeled "traditional." Grimes and other Democrats, however, could lose because too many black voters stay home.

But time has a way of erasing memories and softening differences. Stick around a few years, and you may see Democrats avoiding Hillary Clinton and campaigning with the beloved elder statesman of the party: Barack Obama.