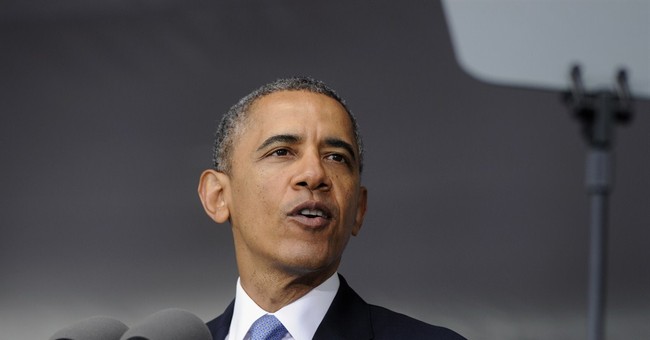 Conservatives generally agree on a few propositions. The federal government should avoid spending money unnecessarily. It shouldn't exceed its basic constitutional duties. It should encourage self-reliance rather than dependency. It should accept that some problems are beyond its ability to solve.

Barack Obama, they may be surprised to learn, agrees with much of this formula. He just applies it in a realm where conservatives often don't: foreign relations and national security. The Obama doctrine, as outlined in his policies and his speech at West Point Wednesday, is one of comparatively limited government.

In the domestic realm, they believe the federal government's powers are few and mostly modest. Beyond the water's edge, it's a different story. When George W. Bush embarked on an extravagant project to "help the Iraqi people build a lasting democracy in the heart of the Middle East," Republicans granted him all the leeway he could want.

The Constitution says the government should "provide for the common defense." But Bush translated "defense" to mean going to war far from our shores against a country that had not attacked us.

His idea of self-restraint was saying, "The United States will not use force in all cases to preempt emerging threats" (emphasis added). But he insisted that "the United States cannot remain idle while dangers gather." Any potential danger, anywhere, anytime was grounds for an American attack.

A more sensible view is that the U.S. can indeed remain idle while alleged dangers gather, because most of them won't materialize. The immortal philosopher Calvin Coolidge said, "If you see 10 troubles coming down the road, you can be sure that nine will run into the ditch before they reach you." Many conservatives believe in hurrying out to meet all 10 just in case.

Obama noted that in recent decades, "some of our most costly mistakes came not from our restraint but from our willingness to rush into military adventures without thinking through the consequences." Substitute "government programs" for "military adventures," and he could be quoting Paul Ryan.

"I would betray my duty to you, and to the country we love, if I sent you into harm's way simply because I saw a problem somewhere in the world that needed to be fixed," he told the cadets. The attitude he cautions against is one that he and his fellow Democrats do not routinely apply to domestic matters. But it's a sound one.

Critics charge that Obama's foreign policy shows an unwillingness to lead, or weakness, or uncertain purposes. The same complaint, of course, could be made about conservative policies on poverty, health care, urban blight, access to housing and more. "Don't you care?" indignant liberals ask.

But sometimes ambitious government undertakings are too expensive to justify, sometimes they fail to solve problems, and sometimes they make things worse. In those instances, declining to act -- and explaining why -- is the most authentic form of leadership. That's just as true in the international realm as it is in the domestic one.

If Obama has yet to come up with a bumper-sticker slogan for his approach, the elements are fairly clear: Don't use military force until other means are exhausted -- and maybe not then. Don't use ground troops when you can use bombers or drones. Don't act alone when you can enlist allies. Don't take the lead role when someone else will do so.

Don't do for other countries what they could do for themselves. Don't confuse desirable outcomes with vital interests. Keep in mind that very few things are more costly and harmful to American interests than an unnecessary, unsuccessful war.

The president has followed these guidelines with reasonable consistency, which is one reason he could tell the cadets, "You are the first class to graduate since 9/11 who may not be sent into combat in Iraq or Afghanistan" -- and not because they'll be deploying to fight somewhere else.

There will always be people who demand that the U.S. government do more and spend whatever it takes to solve an array of problems without any assurance of accomplishing its goals. Abroad, at least, Obama is not one of them.