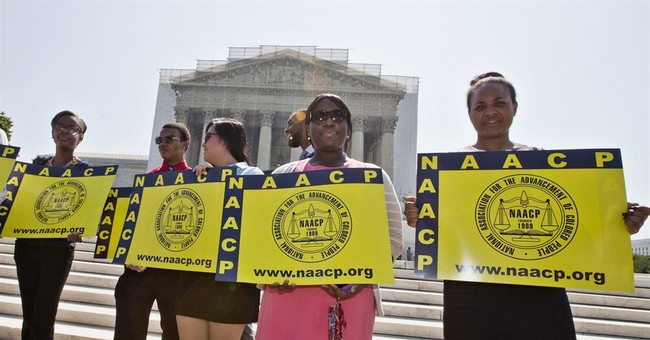 The question of racial preferences in university admissions has bedeviled the nation for decades. In 2003, the Supreme Court finally issued a verdict that gave something to either side of the debate.

In a case involving the University of Michigan, it said public universities may not adopt rigid formulas to help one minority group or another -- but may consider race as one factor in admissions as part of an effort to create a diverse student body. The decision had the distinct feel of a compromise.

There was one more element of splitting the difference: Though states could adopt these race-conscious policies, they didn't have to. Affirmative action for student body diversity was neither required nor forbidden. The Supreme Court left the decision to the states or their educational administrators.

So in 2006, opponents of racial preferences put a state constitutional amendment on the ballot to ban their use by Michigan's public universities. It passed with 58 percent of the vote. Democracy was put to work, and democracy produced a result that fell within the guidelines established by the Supreme Court.

Opponents of racial preferences, in this view, may not amend a state constitution to forbid them. To do so violates the constitutional guarantee of equal protection by making it too hard for minority groups to get their way.

It was a strange and unconvincing argument on several grounds. The first is that it would create different rules for the two sides of the debate. Those who favor affirmative action would be free to establish it by amending state constitutions, but those who reject it would not. How is that "equal protection"?

The second oddity is the notion that banning race discrimination amounts to race discrimination. The Michigan amendment didn't say whites would enjoy preferential treatment and blacks would not. It said neither would. Instead, admissions would be color-blind. As a lower court judge wrote in this case, "A state does not deny equal treatment by mandating it."

Not every racial minority benefits from race-conscious admissions. When California abolished them, the number of Asian-Americans on state university campuses didn't fall -- it rose. Setting a floor for African-Americans and Latinos put a ceiling on those of Chinese, Indian, Korean and Pakistani ancestry.

The other problem with the critics' argument is that it implies there is something wrong with democracy -- which, after all, is built upon majority rule. That's supposed to be a virtue: consent of the governed and all that.

For racial minorities, ballot initiatives have the advantage of spurring broad public debate, taking decisions out of closed rooms along the halls of power. The referendum process gives racial minorities the chance to confront the arguments of their opponents openly and build coalitions to prevail. Genuine racism does not fare well when forced to defend itself.

The fact that a group is a minority does not actually mean it will lose. A new Pew Research Center poll shows that 2 out of 3 Americans -- and a majority of whites -- support university affirmative action efforts.

Colorado is whiter than the nation as a whole, but in 2008, voters there turned down a ban on affirmative action. In 2003, Californians rejected a measure to prevent race-conscious policies by barring governments "from classifying any person by race, ethnicity, color, or national origin."

Justice Stephen Breyer, part of the court's liberal wing, noted that the Michigan measure took power away from unelected university officials and gave it to ordinary people. To invalidate the amendment, he said, would violate the constitutional principle that "favors decisionmaking through the democratic process. Just as this principle strongly supports the right of the people, or their elected representatives, to adopt race-conscious policies for reasons of inclusion, so it must give them the right to vote not to do so."

Democracy is not a perfect way to resolve complex policy issues that implicate competing and deeply held beliefs on every side. But it will do until a perfect way comes along.