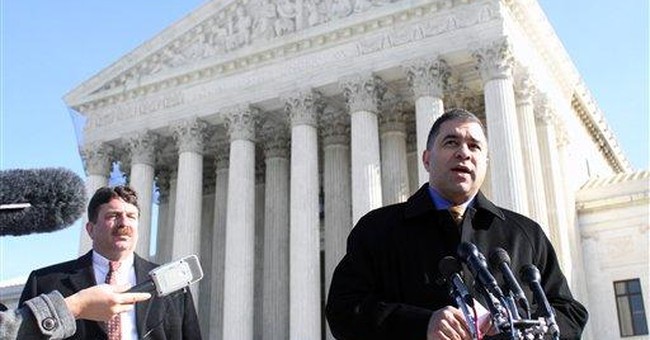 During the 2008 campaign, a group called Citizens United put together a documentary, “Hillary: The Movie.” Remember seeing it on cable TV? No, you don’t, because the organization decided it couldn’t show the film without the risk of felony prosecution. It had every reason to be afraid.

The problem was that the movie was not only about Clinton but made the case that she should not be president. Worse, it was supposed to be shown during -- get this -- an election campaign. That, under the federal law, made it verboten.

Citizens United is a nonprofit corporation set up to engage in conservative advocacy -- an assemblage of individuals working for a political agenda. As individuals, they have the right to spend money to spread their opinions. But when they form a corporation for that purpose, some people think the same activities should be illegal.

That point of view prevailed in the Bipartisan Campaign Reform Act of 2002, which forbade corporations from engaging in “electioneering communication” within 30 days of a primary or 60 days of a general election. But Citizens United claimed the rule violated its free speech rights. And last week, the Supreme Court agreed.

The result was not in much doubt after the justices heard the case. The government lawyer defending the statute was asked: If movies financed by corporations may be banned because they express opinions on candidates, how about books?

“It’s a 500-page book, and at the end it says, ‘So vote for X,’ the government could ban that?” asked Chief Justice John Roberts Jr. Replied the Justice Department attorney, “Well, if it says ‘vote for X,’ it would be express advocacy and it would be covered by the pre-existing Federal Election Campaign Act provision.”

If corporate advocacy may be forbidden as it was under the law in question, it’s not just Exxon Mobil and Citigroup that are rendered mute. Nonprofit corporations set up merely to advance goals shared by citizens, such as the American Civil Liberties Union and the National Rifle Association, also have to put a sock in it. So much for the First Amendment goal of fostering debate about public policy.

It is often argued that corporate speech may be banned because corporations enjoy certain privileges afforded by law. But it’s a longstanding constitutional axiom that the government may not require the surrender of constitutional rights in exchange for state-furnished benefits -- say, barring criticism of Congress by residents of public housing.

Once you grant the government that sort of power, it is bound to expand. Newspapers could be forbidden to make endorsements. Right now, media companies are exempt from the ban. But why should a newspaper be free to spend money urging voters to support a candidate, while other companies are not?

Critics fear that freed from constraints, giant corporations will burn vast sums to help or hurt politicians. In reality, most business people are not about to plunge into divisive election campaigns, for fear of antagonizing customers.

Apple and Microsoft are not going to be squaring off to see who can elect the next president. In Illinois, corporations have always been allowed to spend money on elections. They rarely take any noticeable role.

In the end, the right to speak does not mean the power to control the political process. It merely means the right to convey views that citizens are free to reject -- which, if they distrust corporate power, is exactly what they are likely to do.

Under this ruling, corporations will be allowed to speak about politics, just as they may speak about their products. In both realms, though, the effort is wasted unless they offer something their audience wants. The marketplace of ideas is not so different from the marketplace of goods.

Corporations have the freedom to communicate what they want. But the people still have the ultimate right: the right to say no.