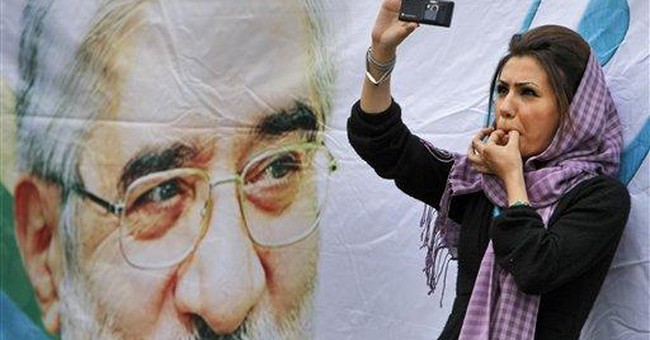 A tyrannical government is by nature in a constant state of war with its own people. There are periods of truce, but none of real peace. We in the democratic world generally think of government as an institution established by the people to serve their needs, even if it often fails. But the rulers in a place like Iran are more like conquerors presiding over a subject people.

Sometimes, like right now, that fact becomes inescapable, even to subjects who had imagined they were in the care of humane and benevolent guardians. Iranians who voted for Mir Hossein Mousavi, only to see their votes disregarded, now discover their country is ruled by an organized-crime gang that is prepared to use any means to maintain its grip.

That comparison may be unfair -- to the Mafia, which at least doesn't compound brutality with deceit by claiming to administer the will of God or act in the best interests of its victims. The difference between a despot and a gangster is that a gangster is seldom hypocritical.

Hypocrisy, it has been said, is the tribute vice pays to virtue. Even the most vicious tyrants feel a compulsion to masquerade as servants of the people, by holding sham elections, writing meaningless constitutions and setting up Potemkin courts. But when they begin to believe their own propaganda, they are often disabused of the fantasy.

The official Guardian Council disparaged opposition claims of massive stuffing of ballot boxes. "Statistics provided by the candidates, who claim more than 100 percent of those eligible have cast their ballot in 80 to 170 cities, are not accurate; the incident has happened in only 50 cities," said a spokesman. Only 50 cities! That's a relief.

There were other neon signs advertising the fraud. A study published by Chatham House and the Institute of Iranian Studies at the University of St. Andrews said, "In a third of all provinces, the official results would require that Ahmadinejad took not only all former conservative voters, all former centrist voters, and all new voters, but also up to 44 percent of former reformist voters, despite a decade of conflict between these two groups." It's as plausible as John McCain carrying Cambridge, Manhattan and Berkeley by a landslide.

Ahmadinejad is not the first autocrat to learn the perils of democracy. Last year, longtime Zimbabwean strongman Robert Mugabe came in second in the first round of balloting, though his goons so terrorized the opposition that he ended up in the curious position of being alone in the runoff.

Augusto Pinochet of Chile submitted himself to a national referendum in 1988, only to be surprised when his people voted to show him the door. Nicaragua's Daniel Ortega underwent the same shock therapy in 1990.

While those tyrants deferred to the election outcomes, Ahmadinejad refuses to be a hostage to the will of the people. But if the regime can pretend to have won the election, it can't pretend there are not throngs of citizens in the streets protesting the apparent fraud.

So it had to abandon the fiction that Iranians enjoy such fundamental rights as freedom of speech and freedom of assembly. If they really did, we would not see security forces attacking dissenters with tear gas, truncheons, water cannons and live ammunition. Nor would we hear of up to 2,000 opposition activists being arrested, as estimated by the International Campaign for Human Rights in Iran.

We would not find the government forbidding a memorial service for Neda Agha-Soltan, the woman fatally shot at a protest -- or commanding mosques not to hold such ceremonies for anyone killed in demonstrations, as at least 17 people have been. We would not see the "supreme leader," Ayatollah Ali Khamenei, decree that "street demonstrations must be stopped" because the government cannot "allow itself to be intimidated by such initiatives."

Shame on the people of Iran for trying to "intimidate" their foes. That, as they should know better than anyone, is the prerogative of the oppressors, not the oppressed.