Stephen Moore
|
Posted: Sep 15, 2020 12:01 AM
Share   Tweet
The opinions expressed by columnists are their own and do not necessarily represent the views of Townhall.com. 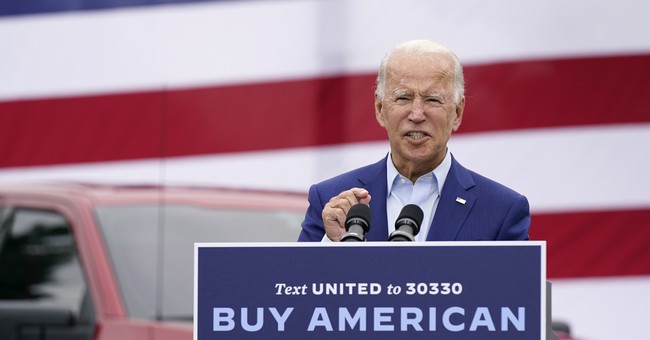 Joe Biden just can't get his story straight on his green energy promises.

But that is far from what he was saying earlier this year. During a March Democratic primary debate exchange between Sen. Bernie Sanders and Biden, Sanders started by saying: "I'm talking about stopping fracking as soon as we possibly can. I'm talking about telling the fossil fuel industry that they are going to stop destroying this planet -- no ifs, buts and maybes about it."

After that famous Biden-Sanders debate, the Biden campaign issued a retraction, meaning this isn't really what the former vice president meant to say. And, admittedly, he's old; he loses his train of thought; he can't be expected to remember his latest official position on fracking every week. His latest flip and flop is no drilling permits on federal lands.

But what is unambiguous and in big, bold writing in the Biden "buy America" plan is his signature pledge to the climate change crusaders to end fossil fuel use in America by 2035. This, of course, is a de facto ban on fracking, because if we aren't going to use the energy, why would anyone drill for it?

That Biden zero-carbon emissions target requires a glide path to no fossil fuel production and consumption 15 years from now. Given that we currently get about 80% of our energy from oil, gas and coal, according to Daniel Yergin, a world expert on energy, getting down to zero is going to be a gut-wrenching experience for blue-collar workers.

There are a lot of them. The oil, gas and coal industry accounts for somewhere between 5 and 10 million jobs, depending on how you count them. These are almost all high-paying blue-collar jobs -- the kind that Biden laughingly says he wants to bring back home to America -- and hundreds of thousands of them are in battleground states such as Ohio, Pennsylvania and Colorado. How the left ever thinks it will turn Texas blue by promising to ban oil is one of life's great mysteries. Liberals must really believe Texans are stupid people.

The Wall Street Journal reports that, in 2019, the U.S. led the world in oil and gas production. Because of fracking, we passed Saudi Arabia in output. In other words, oil and gas IS made in America now, thanks, in no small part, to President Donald Trump's all-in strategy of making the USA energy dominant.

So, Biden is telling us we are going to bring jobs back home by decapitation our energy industry. Wind and solar account for about 5% of our energy consumption today, so even if we double their output, we still need to have access to other energy. Under the Biden plan, it sure looks like we will have to get it from Russia, Saudi Arabia and even China, which is planning to build hundreds of coal plants over the next decade.

The leaders of Beijing could care less about climate change. What they do care about is global economic domination by knocking America off our pedestal. Biden's energy plan would give President Xi Jinping and his fellow communists a big assist.