Are You Lonesome Tonight?

Stephen Moore
|
Posted: Jul 21, 2020 12:01 AM
Share   Tweet
The opinions expressed by columnists are their own and do not necessarily represent the views of Townhall.com. 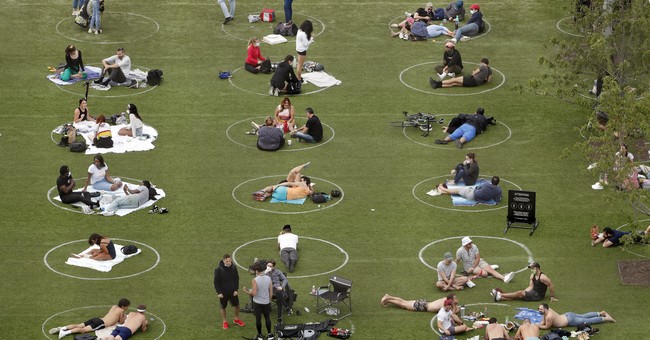 "Are you lonesome tonight? / Do you miss me tonight? / Are you sorry we drifted apart? / Does your memory stray to a brighter, sunny day?" -- Elvis Presley

Loneliness is such a sad affair, as the saying goes, and our politicians have succeeded in turning America into a lonely nation by decree. We are going on four months now of lock-ins, business shutdowns, and few if any, social gatherings. What this is doing to the nation's psyche has been devastating.

A good friend of mine, Wayne, is 80 years old. He's sociable, always upbeat, and a great storyteller. He likes nothing more than to have a whiskey sour and a long dinner with friends. He's single and loves to visit the ladies -- especially the younger ones in their 60s and 70s! I spoke to him last week, and he was more forlorn than at any time I've ever known him. He lives in an upscale assisted living facility, but he hasn't been able to visit with friends for three months. He's been isolated. A delivery man brings his meals; he isn't allowed to go out during the daytime when there are a lot of people out on the streets of Chicago. I offered to come to visit him, and he was excited but called back the next day to say, never mind, the folks at the living center won't allow outsiders to come in because of the virus.

He's depressed. He says he is starting to feel "more dead than alive."

Everyone reading this probably knows more than one person suffering from the agony of moderate to severe depression resulting from this continuing, god-awful economic lockdown that is supposed to be saving lives.

The negative effects on Americans' health are getting more worrisome with every passing week.

The good folks at Foundation for Economic Education recently reported on "alarming spikes in drug overdoses," which The Washington Post calls "a hidden epidemic within the coronavirus pandemic."

By examining the national drug abuse data, they found that overdoses in March rose by 18% from the previous year nationally. In April, that figure ticked up to 29%. In May, the increase was 42%.

Mental health experts find a strong link between loneliness/depression and drug overdoses. Social distancing may be good for us, but it is bad for us, too -- especially after many months.

Other research confirms that isolation can lead to physical health problems ranging from loss of sleep to heart failure to stress to injured immune systems to obesity. I've gained many pounds since the lockdowns began, as I constantly raid the refrigerator when I get bored staying at home. Children are especially negatively affected, and research indicates the cognitive effects can be long-lasting. Get the schools, the parks, the playgrounds, and the sports programs opened, for goodness' sake.

There is another negative sociological effect of the fear of the virus that is disrupting normal human connection. People are suspicious; they walk rapidly away from you if they see you coming toward them. They scowl and get agitated. I am told by some of my friends who lived through the horrible polio epidemic of the 1940s and early 1950s that it was never like that. Even though polio was a much more crippling and dangerous disease than the coronavirus, people didn't walk around suspicious that the person next to them was carrying the disease. Commerce continued to flow, and businesses didn't shut down, though swimming pools were often closed.

This was the "greatest generation." They lived through the Great Depression and World War II. They weren't going to let a disease shut down our society. Polls show today that young people in their 20s and 30s are the most worried about COVID-19 and most in favor of lockdowns. They are the age group least likely to get sick from it. This is the snowflake and "safe spaces" generation that lives in mortal peril that someone might say something that offends them. It would be hard to imagine these worrywarts storming the beaches of Normandy.

Americans have to be braver. We need to interact. Solitary confinement is a form of punishment. The political class in America is punishing us all for their own arrogance and incompetence.