Stephen Moore
|
Posted: Dec 11, 2018 12:01 AM
Share   Tweet
The opinions expressed by columnists are their own and do not necessarily represent the views of Townhall.com. 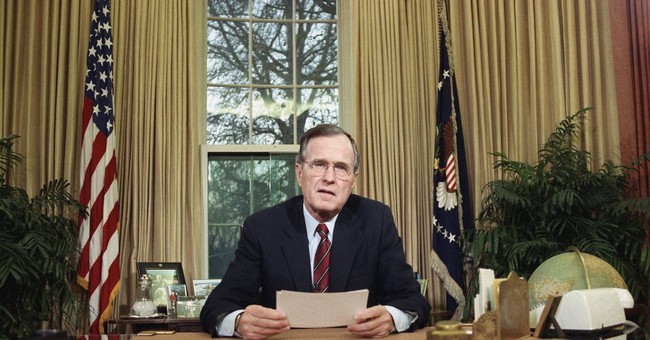 The eulogies for George H.W. Bush keep rolling in, and a great American hero's life has been given proper tribute.

But there has also been a rewriting of history about the Bush presidency that needs to be cleared up. Liberals love Bush for the very tax increase betrayal that destroyed his presidency. This was the official end of the Reagan era. This was not just the political blunder of the half-century, it was a fiscal policy catastrophe.

Most readers under the age of 40 have no idea the real story of what happened. What the history books are writing is that Bush showed political "courage" in breaking his "Read my lips: No new taxes" pledge, and he was thrown out of office for doing the right thing.

Wrong. The quick story is that the Reagan expansion -- in no small part due to the reduction of the highest tax rates from 70 percent to 28 percent -- was shrinking deficit spending dramatically by the end of Ronald Reagan's presidency. The budget deficit had fallen in half, to 2.9 percent of GDP by 1988. It was headed to below 2 percent if Bush simply had done nothing.

We will never know whether Bush always had a secret plan to raise taxes, but we do know that Dick Darman, Bush's budget director, persuaded Bush to agree to a budget deal with congressional Democrats to raise income taxes in exchange for spending cuts from Democrats.

But instead of cutting government spending, the 1990 budget deal became a license for Democrats to spend and spend. The budget deficit in 1991 was supposed to be $253 billion, and if Bush simply allowed the Gramm-Rudman automatic spending cuts to occur, the deficit would have fallen to below $100 billion. Instead, the deficit that year was $269 billion -- with the tax increase.

Government expenditures accelerated at a faster pace than at any time in 30 years. In two years time, the domestic budget grew by almost 20 percent above inflation.

Back in 1992, I wrote a widely cited study titled "Crime of the Century" and reported that "the budget deal was supposed to save $500 billion over five years. When the budget deal was passed, the 1991-95 deficit was projected at $770 billion. Instead the deficit over that period was closer to $1.2 trillion. The budget deal added nearly $500 billion to the national debt; it did not reduce the debt by that amount."

The economic impact was worse. The tax increases either caused the recession or exacerbated it -- ending the Reagan expansion.

The economy lost 100,000 jobs and the unemployment rate rose from 5.5 percent to 7.4 percent. Real disposable income fell from 1990 to the eve of the 1992 election. If this tax hike was a success, so was the Hindenburg.

In 1990, two up-and-coming stars of the GOP, House members Newt Gingrich and Dick Armey, courageously bucked their own president and led the revolt against the tax betrayal. Gingrich famously called the tax hike "an act of supreme stupidity." These two would later become the first Republican speaker of the House and majority leader in nearly 50 years.

Democrats could not hardly contain their glee. They knew that the tax hike would divide and conquer the Republican Party and win back the White House for the first time in 12 years in exile. With a third-party candidate Ross Perot in the race, George H.W. Bush, who had a 90 percent approval rating in 1990, got less than 40 percent of the vote two years later.

Few events of the last four decades have had a more profound political impact than the Bush tax betrayal. This folly solidified the Republican stance as an anti-tax party, and Republicans have not voted for a tax hike ever since.

Three enduring lessons should be learned by the 1990 budget deal.

2) Tax increases damage the economy and can make deficits worse.

3) When Republicans raise taxes, they lose.

Democrats would seemingly give up their first-born son to get Donald Trump to vote for a tax hike as Bush did. They harbor secret hopes that high budget deficits (due to spending hikes, because revenues are at an all-time high) will sucker Trump into a 1990-style tax hike. He likes to make deals. This scenario would guarantee Elizabeth Warren or Joe Biden or whomever it might be, the keys to the Oval Office.

President Trump, don't go there unless you want to be as George H.W. Bush put it "a one-termer."