Stephen Moore
|
Posted: Apr 18, 2017 12:01 AM
Share   Tweet
The opinions expressed by columnists are their own and do not necessarily represent the views of Townhall.com. 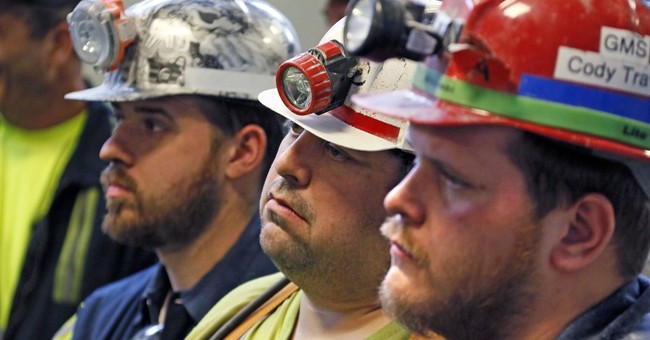 Buried in an otherwise-humdrum jobs report was the jaw-dropping pronouncement by the Department of Labor that mining jobs in America were up by 11,000 in March. Since the low point in October 2016, and following years of painful layoffs in the mining industry, the mining sector has added 35,000 jobs.

What a turnaround. Liberals have been saying that Donald Trump was lying to the American people when he said that he could bring coal jobs back. Well, so far, he has delivered on his promise.

There's more good news for the coal industry. Earlier this month, Peabody Energy -- America's largest coal producer -- moved out of bankruptcy, and its stock is actively trading again. Its market cap had sunk by almost 90 percent during Barack Obama's years in office. Arch Coal is also out of bankruptcy.

It turns out that, after all, elections do have consequences. The Obama administration and its allies, such as the Sierra Club, tried to kill coal because of their obsession with global warming. Regime change in Washington has brought King Coal back to life.

Donald Trump pledged to coal miners in small towns across America that he would be a friend to American coal and fossil fuels. As promised, Trump has lifted the so-called Clean Power Plan regulations and several other EPA rules that were intentionally designed to shutter coal plants, which it accomplished with ruthless precision. Hillary Clinton had promised her green allies that she would finish off every last coal-mining job in America.

The coal miners weren't too happy about this, and her arrogant disregard for a leading American industry that hires tens of thousands of union workers contributed to her losing almost all the coal states -- many of which were once reliably Democratic.

America was built on cheap and abundant coal. Fossil fuels powered the U.S. into the industrial age and replaced windmills and wood burning, which were inefficient, as the primary sources of electricity. America currently has access to 500 years' worth of coal -- far more than any other nation. Despite the last decade's war on coal, the U.S. still derives about one-third of our power from coal, making it second only to natural gas.

Liberals have argued that coal could never make a comeback, because of cheap natural gas. Clearly, the shale gas revolution -- with prices falling from $10 to $3 per million cubic feet -- has hurt coal producers.

But economic necessity is the mother of invention, and coal companies, including Peabody, have figured out how to become far more efficient in production. What's more, clean coal is here. Emissions of lead, sulfur, carbon monoxide and other air pollutants from coal plants have fallen by more than half, and in some cases 90 percent, in recent decades.

The climate-change industrial complex pontificates that the U.S. has to stop using coal to save the planet. But even if the U.S. cut our own coal production to zero, China and India are building hundreds of coal plants.  By suspending American coal production we are merely transferring jobs out of the U.S.

Renewable energy is decades away from being a major energy source for the world. Until that happens, coal and natural gas will compete as low-priced, super-abundant, domestically produced energy sources for 21st-century America. Nuclear power will, I hope, continue to play an important role, too. Meanwhile, for all the talk of the growth in wind and solar industries, they still account for less than 10 percent of our energy. Almost 70 percent comes from natural gas and coal.

Coal isn't dead in America. It is unleashed. As a Washington Times editorial put it very well recently, "The left gave up on the 100,000 coal workers in America more than a decade ago. Donald Trump has not." Remember this the next time Elizabeth Warren or Nancy Pelosi lectures us about how much they care about the working class in America.