As a Democrat, I Know When I See A Radical Liberal Activist

Sheriff Tony Mace
|
Posted: Nov 05, 2018 9:21 AM
Share   Tweet
The opinions expressed by columnists are their own and do not necessarily represent the views of Townhall.com. 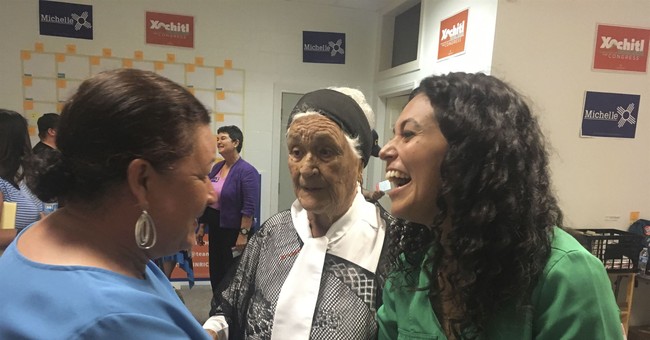 We are told that Xochitl Torres Small is a traditional New Mexico Democrat like myself — one who loves hunting on our beautiful public lands.

This wouldn’t be the first time that a campaign ad has tried to mislead us about a politician, of course, but it’s still insulting.

Small is a lifelong liberal activist who has raised millions of dollars from out of state interests to brand herself as a moderate and win the race for New Mexico’s 2nd Congressional District in November, but her political record is simply too blue to hide behind a quick coat of purple paint.

If you want to get a sense of where the Democrat candidate truly stands on issues, just take a look at her employment history and her stated policy positions.

Over the course of her career, Small worked for Planned Parenthood and was a field representative for Democrat Tom Udall, an extreme liberal during his time in office. Not surprisingly, Small’s biography on her website doesn't mention anything about her stint with Planned Parenthood.

While Small’s carefully-edited policy platform does a decent job of painting her as a moderate, she can’t completely hide the radical positions she has always supported.

In reality, Small supports amnesty for illegal immigrants, promises to “fight for a path to citizenship” for those who are in our country illegally, andpledges to “oppose the construction of a border wall” with Mexico.

It’s no wonder that Xochitl Torres Small has received endorsements from radical liberal organizations across America, including the pro-abortion groups NARAL and Emily’s List, and the anti-free speech group End Citizens United.

Then there’s the issue of gun control. Publicly, Small claims that she doesn‘t want to abolish the 2nd Amendment, proclaiming that hunting is “part of my heritage.” Yet, she frequently advocates for “common sense” gun control without specifying what that would entail, and hasn’t been endorsed by the National Rifle Association (NRA).

That’s precisely why Herrell was endorsed by dozens of conservative groups and policy organizations including the National Border Patrol Council, the U.S. Chamber of Commerce, the National Federation of Independent Businesses, National Right to Life, Gun Owners of America, and the NRA.

“Yvette Herrell is the only candidate in this race who will defend our Second Amendment rights,” said Chris W. Cox, the chairman of the NRA Political Victory Fund. “The NRA encourages all freedom-loving New Mexicans in the 2nd Congressional District to vote Yvette Herrell for Congress in November.”

Real defenders of the Second Amendment know exactly who will protect your rights in Washington and who won’t, which is why a deceiving photoshoot with hunting rifles hasn’t convinced them to support Xochitl Torres Small on Election Day.

Radical Democrats are hoping to sneak one of their own past voters in Southern New Mexico, but we can’t let ourselves fall for slick hunting ads funded by out-of-state liberal extremists.

Xochitl Torres Small a moderate? It was worth a shot, but that one landed well wide of the mark.

The White House's Stunning Response to the Death of More Than 40 Illegal Immigrants in Texas
Townhall
Gay man calls down the THUNDER on Lefties for 'destroying equality for us' in amazing 'message to the Left'
Twitchy
Pelosi's Response About Pushing Mayra Flores' Daughter Makes It Worse
Redstate
The Morning Beefing: I Have Beef With Liberal Lies About What Abortion Really Is
PJ Media