Dems' Objections to OTC Birth Control? Republicans Are Behind It 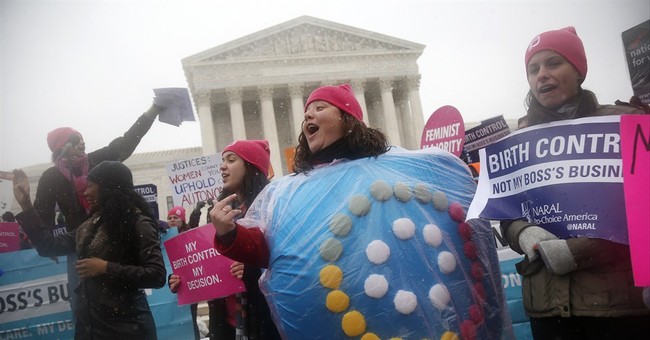 A long, long time ago -- way back in 2013 -- pro-choice progressives united in a new clarion call to make prescription birth control available over the counter. Now, for political reasons, they're changing their tune.

If you're one of the 10 million women in America who uses the pill, the prospect is nothing short of life-changing. Going to the doctor to refill the pill every month or even a couple times a year is annoying and time-consuming. And, according to many doctors, it's unnecessary. The pill is safe to take without a prescription.

"So why can't we have this, when the public and the medical establishment both think it's a great idea?" asked progressive journalist Amanda Marcottetwo years ago.

And according to a Reason-Rupe poll, so do 70 percent of Americans.

Well, in an uncanny and highly unusual turn of events, lawmakers in Washington actually listened. Just this week, legislators introduced a bill that would encourage drug companies to apply to sell contraceptives without a prescription.

But if Republican Sens. Cory Gardner of Colorado and Kelly Ayotte of New Hampshire, along with four other GOP senators, were expecting flowers from Planned Parenthood and others for their bill, the Allowing Greater Access to Safe and Effective Contraception Act, they should brace for disappointment. Suddenly, the idea doesn't sound so great, and the former supporters aren't mincing words.

Planned Parenthood president Cecile Richards said the bill is a "sham and an insult to women."

Karen Middleton of NARAL Pro-Choice Colorado even got personal, saying, "Cory Gardner can't be trusted when it comes to Colorado women and their health care."

Why the about-face? Well, the story the libs are going with is that the bill will actually make the pill more expensive once it's no longer prescription (and therefore not covered by insurance). Which would be a fair point if it were true.

The actual text of the bill just became public late yesterday, but that hasn't prevented hyperventilating condemnation for what it was presumed to do.

Of course, some women would rather not pay as much as $300 in monthly premiums for Obamacare when they can buy birth control a la carte from $10 to $30 a month. But more importantly, there's nothing in the Gardner-Ayotte bill that says all forms of birth control must be made available OTC. Some may remain prescription only. Furthermore, the Obama administration already mandates that Plan B, emergency contraception that is OTC, be covered by insurance, and it could require the same of birth control.

As Sen. Ayotte told me in an email:

Beneath the fear-mongering lies the more likely reason for the change of heart on the left. The bill was simply introduced by the wrong party.

If Democrats cede this issue to Republicans, they lose a major chit in their "war on women" narrative. For years, pro-choice groups have been peddling the charge that Republicans are against access to birth control. But it's utterly (and provably) false.

For one, Gardner and Ayotte are not the first Republicans to champion OTC birth control. Gov. Bobby Jindal introduced the idea in 2012. For another, last year Gallup found that a whopping 88 percent of Republicans find birth control to be morally acceptable. To put this into greater perspective, more Republicans are OK with birth control than Democrats are okay with gay or lesbian relations (71 percent) or abortion (59 percent).

But rather than do the right thing for women, progressives are putting politics before women's health. One hopes that when they actually read the bill, Planned Parenthood and others will change their tune. More likely? They'll just come up with another reason to say no to something women want, but that they alone want to take credit for.