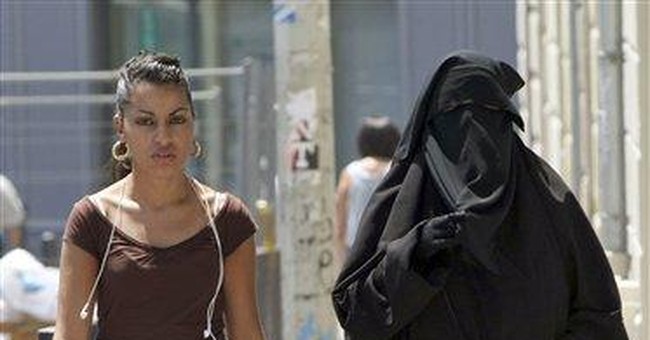 French President Nicolas Sarkozy told Parliament Monday that the burqa, the traditional dress worn by some Islamic women, will no longer be tolerated in France. “The burqa is not a religious sign; it is a sign of the subjugation, of the submission of women,” said a straight-faced Sarkozy, whose lovely wife Carla Bruni has modeled high-end designers like Chanel, Versace, and Christian Dior. (Some may argue her best work is done wearing nothing at all. In 2008, a nude photograph of Bruni sold at auction for $91,000.)

Nevertheless, Sarkozy has decided banning the burqa is “a question of freedom and of women’s dignity.” Battling both gender inequality and religious extremism – and it’s not entirely clear which is Sarkozy’s target – is a courageous undertaking, but battling the burqa, as Western Europe has learned many times, is a losing fight, and completely irrelevant to either objective.

But more importantly, if you’re an advocate for women’s rights or religious freedom, you’d want a stake in the global war on terrorism and Islamic extremism, which threatens both. When Sarkozy uses the burqa as a symbol of oppression – while France has happily criticized from afar the foreign policy of other Western states in the Middle East who want actual freedom from oppression – the irony is laughable.

But it’s also typical of the kinds of misdirected battles Sarkozy tends to pick, and one from which I hope our president doesn’t take any cues.

France has grappled with these issues for years, and banned head scarves and other religious garb from public schools in 2004. Divisions between French nationals and Muslims have grown both in width and in strength, and Sarkozy’s statement is in line with a recent ratcheting up of pro-secular rhetoric that looks to reduce the three major religions to their most common (and inoffensive) denominator.

As my friend Joe Grieboski, head of the Institute on Religion and Public Policy said, "It is almost as if the French Government has made it a mandate to eliminate religion from the public sphere. No faith is safe." And unfortunately, banning the burqa, even if only in sentiment, will please a great many French and Western Europeans.

But what would be characterized in the US as an aggressive foreign policy statement is in France merely a cultural commentary on race and nationalism. Seen through this prism, Sarkozy’s maudlin plea for “women’s dignity” is transparent and obscures the real agenda: promoting a Western, secular, (and, in particular, French) sensibility. It has little to do with women’s rights, and even less to do with religious freedom. And in case there was any doubt, it has absolutely nothing to do with national security.

But for the United States and the rest of the free world, national security is the main, if not only, issue. Getting along well with Muslims is a concern for political, not cultural, reasons. Americans don’t need Muslims to prove (by disrobing) their commitment to Western ideals. Americans just want to live in relative security, knowing Islamic extremism is being dealt with effectively. The United States keeps Islamic extremism separate from Islam, and by targeting the burqa, Sarkozy has lazily conflated the two.

France has the largest population of Muslims in Western Europe. For this reason, Sarkozy has a particular responsibility to get this right. Opting out of actual foreign policy in favor of an arbitrary (and offensive) sartorial debate is another example of inaction disguised as action.

All indications thus far are that President Obama plans to continue America’s commitment to democracy in the Middle East and security at home. But with timidity growing on Iran, it’s unclear just how forceful he intends to be. We should all hope he doesn’t revert to a Sarkozian model: all talk, no action.