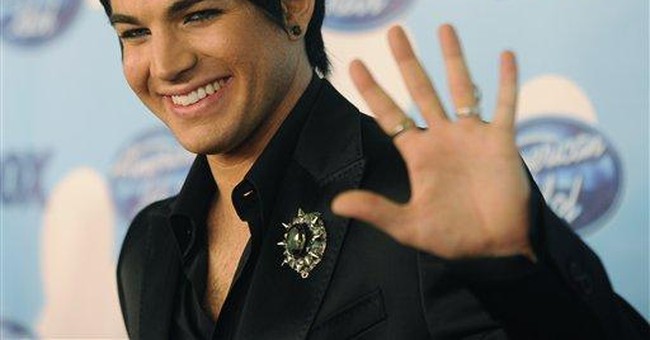 This week Kris Allen, who during the American Idol season prompted unabashed praise from Simon Cowell and the rest of the judges, was voted America’s favorite over Adam Lambert, his theatrical and inconsistent competitor.

Because Adam Lambert is, according to many, gay, the liberal media is blaming Christians for the tough loss. There are even rumblings that this “election” was rigged. Reminiscent of Bush/Gore 2000, anyone?

Liberals are once again falling back on the only explanation they can ever muster when an anointed protégé or pet cause du jour loses: blame the backwards, hickish, intolerant Christian masses. Yes, the same folks who – inexplicably – put George W. Bush in the White House (twice), fell for Sarah Palin, and voted for Proposition 8 all to the shock and awe of the apoplectic left.

His shock was mitigated by what he considered an obvious explanation for the loss: “You could say…that religion is an irrelevant criterion for judging a singing competition. But the fact remains that Idol is one of TV’s most family-friendly shows, and it draws a large number of Christian viewers. Kris Allen had the edge here.”

The Buffalo Examiner’s gay and lesbian issues point man, Kelvin Lynch, likewise explained it, “Kris is practically a poster boy for heterosexual, white-bread Christianity, while Adam is an in-your-face Jewish gay man. That could very well have played a significant role in the final voting among red state voters with texting capability.”

And Elliot Olshansky wrote in the New York Daily News: “Going into the finale, there was talk of ‘red state-blue state’ politics at work, with Lambert’s painted fingernails, ‘guyliner,’ and uncertain sexuality against Allen’s down-home, churchgoing sensibilities. Given the current political climate, that matchup appeared to favor Lambert, but a number of blue-state types may be ‘too cool’ for Idol’s mass appeal, and unlikely to vote.”

Apparently for Olshansky, the Christian ear is too untrained to appreciate Lambert's nuanced vocal abilities, and thus fell for the likeable and talented Allen by default. Bizarre indeed.

I didn’t see every American Idol episode this year. Did I miss the one where Adam Lambert ran on stage, draped in a rainbow flag, condemning heterosexuality and celebrating Satanism? What exactly did Christians object to? Nail polish? Makeup? Hair products? Have you seen Christian rock heavyweights like POD, Manafest or Decypher Down? They don't exactly look like the Vienna Boys Choir.

The suggestion that Christian viewers not only correctly interpreted Lambert’s guyliner as code for “gay” -- and not just theatrical effect -- but then decided gay men have no business in, um, show business, is hysterical, paranoid, and incredibly bigoted.

But the whole thing was a set-up from the get-go. Liberal Hollywood and popular gay activists like Perez Hilton threw their weight behind Lambert early on. Adam was a sure-thing for them, but only because they wanted him to be. His performances were criticized by the judges more than once. But it’s not like these Idol arbiters based their convictions on statistics or polls. So if you are plugged into the gossip circles, you’d have believed Lambert was a sure thing, too. Singer Katy Perry put his name on her cape during a performance – and the Daily News claimed this was actually evidence that he was supposed to win.

With few and obscure exceptions, Christian Republicans didn’t launch the attack campaign against Adam Lambert that the left is now launching against Christian Republicans. As we witnessed with the assault on Miss California Carrie Prejean, the same voices seeking increased tolerance are the very voices attacking others for their opinions. And viciously.

American Idol has thus fallen the way of the Miss USA pageant and other one-time innocuous entertainment vehicles – it’s been politicized. Not, however, by the intolerant right, but by the intolerant left who can offer no other explanation for dissent than the lunacy of fringe Christians. Maybe Kris Allen was just the preferred performer? Nah, couldn’t be that easy.