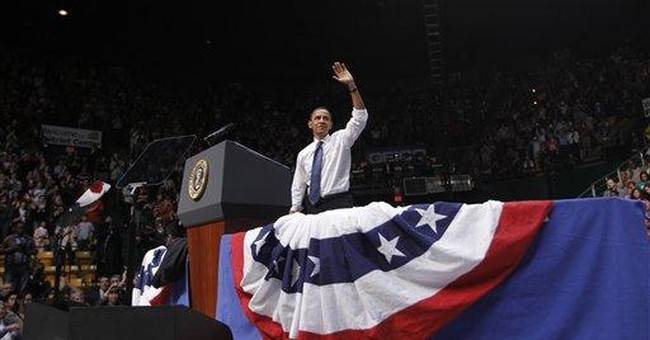 President Obama has finally passed his massive health-care bill, although the staggering cost to the American people has yet to be determined; the attendant increase in taxes and misery, as well as a corresponding decline in quality and standards will most likely remain unquantifiable for many years to come.

Several Republican legislators dutifully reported disturbing elements of the health-care bill, even as the reigning Democrats in the House of Representatives played bait-and-switch with the final bill’s contents. But no one confronted the President about his bold lies concerning the current state of health insurance in the United States. Those lies were legion.

During his year-long pitch for his so-called “health insurance reform,” President Obama repeatedly exaggerated problems, obfuscated facts, and manufactured lies about America’s insurance companies. It was all part of a conscious and calculated effort to sow fear among the populace; if not exactly the “politics as usual” that he derides at every opportunity, then certainly something even far more sinister.

In a speech at George Mason University last Friday, President Obama told a captive crowd that health-care reform will henceforth mean insurance companies can’t cancel an insured’s coverage when they have a claim. "This year, they will be banned from dropping your coverage when you get sick. Those practices will end,” he declared.

Pretty bold stuff. Also, an outright lie. According to attorney Richard Giller, a leading expert on insurance coverage, it is currently illegal in all fifty American states to cancel an insured’s coverage for getting sick. In fact, this column spoke with an actuary for a state insurance commission. Requesting anonymity, the government actuary stated unequivocally that Obama’s claim was completely untrue. “These policies cannot be cancelled, they are guaranteed renewable and have been for over twenty years.” “Guaranteed renewable” means the insurance company can’t cancel the coverage for anything except nonpayment of premiums.

President Obama wove his Americans-are-pathetic-victims narrative with abandon: “They will continue to jack up premiums 40% or 50% or 60%, as they have in the last few weeks without any accountability whatsoever.”

Mr. Giller also informs this column that in more than half the states, insurance companies are strictly accountable to the government of the state in which they operate, forbidden from raising rates without specific approval. Furthermore, insurance companies are bared from raising one person’s health insurance policy premium without first raising the premium for the entire underwriting category to which that person belongs. Additionally, “most states review all rate increases according to the loss ratio standards,” (which means that the state not only reviews to make sure the rate is not too high, but also to ensure that the rate is high enough to pay the expected claims), confirms this government actuary.

"Because if this vote fails, the insurance industry will continue to run wild in America,” said Mr. Obama. But the reality is that the insurance industry is among the most regulated business sectors in America. The only species “running wild” in this country currently is the Democrats in Washington, so intoxicated with power, so consumed with their own importance, so recklessly devoted to their far left agenda that they believe they are accountable to no one. And so far, they haven’t been held accountable; very few in the press corps have been willing to request supportive evidence of their outlandish claims.

Obama also accused insurance companies of doing what he, Speaker Pelosi and Senate Majority leader Harry Reid have been doing all along – engaging in fear mongering. “That’s why their lobbyists are stalking the halls of Congress as we speak. That’s why they’re pouring millions of dollars into negative ads. That’s why they’re doing everything they can to kill this bill." No, they weren’t. This health-care bill is forcing millions to buy health insurance from the very companies Obama says don’t want the bill.

Among the other outrageous claims by Obama is that there is half a trillion dollars lost in “waste, fraud and abuse” of Medicare. But if there really is half a trillion dollars of waste, fraud and abuse in Medicare, then why didn’t Obama find it last year and use those funds instead of the piles of taxpayer cash that were consumed by his failed stimulus bill?

Obama’s health-care bill includes funding for over sixteen thousand new Internal Revenue Service agents to make sure everyone is covered. Think about that for a moment. Seem a little strange to you? If Americans really needed his brand of “health-care reform,” why does Obama think he would need the IRS to enforce it?

Now that it has passed, Obama is prepared to spend millions more in taxpayer dollars touring the country to convince us just how lucky we are that he got his bill through Congress.

Stay tuned for more great policy initiatives; Obama has now turned his attention to his Cap and Trade tax bill, which will attack the energy industry on the basis of saving us from global warming. By design, it will make energy a vastly more expensive commodity for all Americans. And really, in this recession, who could ask for anything more?

If anyone believes Obama’s willingness to tell any lie – no matter how outrageous or divorced from fact – will be restrained by the mounting evidence that global warming as a man-made issue is a hoax, need look no further than his just concluded successful campaign to distort a debate as black and white as insurance law.