Why President Trump Keeps Winning on the Immigration Issue

Scott Rasmussen
|
Posted: Apr 18, 2019 12:01 AM
Share   Tweet
The opinions expressed by columnists are their own and do not necessarily represent the views of Townhall.com. 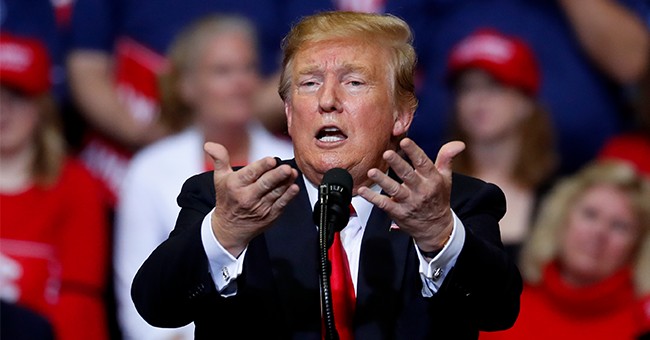 President Donald Trump's proposal for sending illegal immigrants to sanctuary cities is supported by 46% of voters nationwide, according to a ScottRasmussen.com national survey. Fifty-four percent are opposed.

Despite this tepid support, raising the issue is likely to benefit the president's reelection prospects. That's partly because it's an issue that fires up his base supporters; 75% of Republicans like the plan, and they are following the story more intensely than Democrats are.

Additionally, Republicans view the issue of illegal immigration as far more significant than their opponents do. In fact, 41% of GOP voters consider it America's top national security threat. Only 3% of Democrats agree.

But the biggest benefit of raising the issue comes from the president's masterful ability to provoke his opponents into saying things that help his cause. This time, it was pop singer Cher, who complained that her city and state can't afford to handle so many undocumented immigrants, so "How Can it Take Care Of More"? Then, in a follow-up comment, the singer made it clear she also opposed turning over the immigrants to customs officials.

That's precisely the imagery the president wants. Every time he suggests something -- anything -- to address illegal immigration, his opponents say it can't or shouldn't be done. This time, it was Cher. Earlier in the year, it was House Speaker Nancy Pelosi and Senate Minority Leader Chuck Schumer standing firm against a border wall.

The unrelenting opposition to any solutions makes the president look like the only political leader who wants to address the problem. That's a great place to be in a nation where 79% of voters believe that illegal immigration is bad for America. That total includes 89% of Republicans, 82% of Independents and even 69% of Democratic voters. Eighty-six percent of white voters believe illegal immigration is bad for America. So do 70% of black voters and 55% of Hispanic voters.

As if that wasn't enough, 57% of all voters believe border security should be the top priority for any immigration reform. Just 29% take the opposite view and think granting legal status to those already here is more important.

With numbers like those, you would think the president's opponents could come up with something to address the problem. There are plenty of ideas with strong popular support: 84% want to deport illegal immigrants with criminal records, 69% of voters favor increasing the number of Border Patrol agents, 65% support strict punishments for companies that knowingly hire illegal immigrants, 63% believe the U.S. military should defend the southern border, and 53% believe landlords who knowingly rent apartments to illegal immigrants should face strict punishments.

Or, moving in another direction, most voters support changing U.S. immigration laws to grant preference to potential immigrants with skills that could benefit the U.S. economy.

Both the Democratic Party and the nation at large could benefit from a serious debate about the best way to address the problem of illegal immigration. Unfortunately, President Trump is the only political leader who seems willing to even acknowledge there is a problem.