Georgians Should Vote Like Everything Is At Stake, Because It Is

Scott Morefield
|
Posted: Jan 04, 2021 12:01 AM
Share   Tweet
The opinions expressed by columnists are their own and do not necessarily represent the views of Townhall.com. 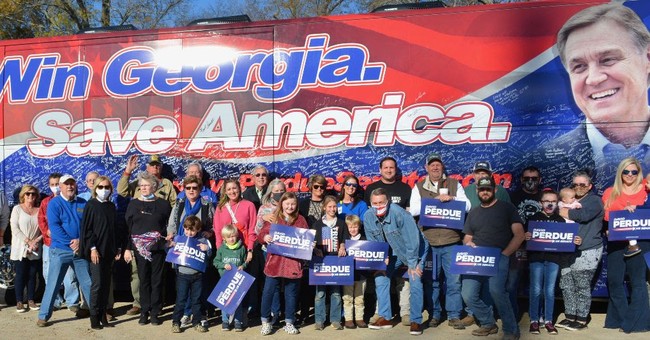 On January 5, 2021, Georgia voters will put a capstone on a disastrous 2020 by deciding which party controls the U.S. Senate. And truly, the stakes couldn’t be higher. Georgians will either decide to put a check on a future-President Joe Biden’s worst leftist influences and impulses, or they’ll choose permanent one-party rule. And by one-party rule, I do mean one … party … rule. Soviet-style, but with a smile (at least at first). If it weren’t so deadly serious, it would be comical that the future of our country comes down to not one but TWO Senate elections (one is a special election we get to repeat all over again in 2022) in the crazy, jungle primary purple state of Georgia, the land of freedom-loving, gun-toting small-town-USA and lockdown & mask-loving Atlanta, the land of Jimmy Carter and Newt Gingrich, the land of, count-em, *two* governors - longtime Trump nemesis Stacey Abrams and newly minted (apparently) Trump nemesis Brian Kemp.

Yeah, it’s complicated, but like it or not, the future of our country IS at stake. In a worst-case scenario, Democrats win both seats, then Chuck Schumer pressures one of the Senate’s only ‘moderate’ Democrats, West Virginia’s Joe Manchin - who has stated he would never vote against eliminating the Senate filibuster - to vote to eliminate the Senate filibuster. At that point, as everyone who hasn’t been living under a rock the past year knows, there’s literally nothing holding Democrats back from their wildest leftist wet dreams, from the Green New Deal to gun bans to packing the courts to statehood for Washington D.C. and Puerto Rico.

If you think this all sounds like fear-mongering, you should think again. If Democrats and leftists are serious about anything, it’s about obtaining and holding onto power, and they know that absolute, unending power is within their grasp for perhaps the first time in history. Why else do you think record amounts of cash are being spent in what should be unwinnable races for a pair of radical leftists in what only two years ago was a red state? Why else do you think every prominent Democrat from Barack Obama to Joe Biden to Oprah Winfrey is campaigning as hard as they possibly can? Why else do you think Chuck Schumer said a win there would literally “change America”?

Should the GOP lose both these races, do YOU trust Joe Manchin to hold the line against what is sure to be unrelenting pressure to go with the flow? Maybe he even will for a few months, until one GOP ‘obstruction’ too many ‘forces’ him to renege on his earlier promise, you know, ‘for the sake of democracy’ and whatnot. At that point, what will happen in America will make the alternate Tolkeinian specter of every orc, troll, and hobgoblin in Mordor descending unimpeded on Hobbiton look like a Girl Scout bake sale. And it’s not just the worst-case scenario that would be exceedingly bad if Democrats get to 50. Even with the filibuster intact, a Democratic-majority Senate means Republicans would hold - count ‘em - ZERO levers of power in D.C. That means no ability to call shots, set agendas, investigate election fraud and inevitable Democratic wrongdoing, or block some of the crazier Biden judicial and executive appointees.

The GOP already faces a tough Senatorial landscape in 2022. Even with a disastrous Biden presidency, Republicans will do well to simply maintain their position. A 52-48 majority now will not only keep this nightmare from happening for the next two years, it will go a long way towards getting us through to 2024, a better Senate landscape for Republicans, and another presidential run with (hopefully) Donald Trump or a Trump-like candidate.

It’s a tight race, one made even tighter by the ongoing fight over the COVID-19 stimulus bill. Sadly, the man who presumably would want to keep his position, Senate Majority Leader Mitch McConnell, has been his own worst enemy by playing parliamentary games with the proposal to give $2,000 to Americans. Granted, there is no real money in the coffers to justify such grandiose, but Americans strongly agree with the point that if we’re going to give away countless billions on foreign aid, the Kennedy Center, and lawmakers’ pet projects, a significant portion of that ‘largesse,’ such that it is, should go to ordinary people who through no fault of their own have been negatively affected by our sham response to COVID-19.

Indeed, a recent poll by GOP pollster Trafalgar Group shows over 75 percent of Georgians want to raise the current $600 amount to $2,000. As Trafalgar’s chief pollster Robert Cahaly put it, that $2,000 is “as popular” in Georgia “as BBQ, college football, and sweet tea.” Yet, McConnell, a normally smart politician, seems perfectly willing to toss all that away in a futile attempt to tack on an election-fraud investigation and a repeal of Section 230. C’mon, man!

Are these candidates perfect? Of course not. Do most Republicans suck? Yep. But if there was ever a time to choose the lesser of two evils, this is it. Democrats must not be allowed to win in Georgia. If you’re a voter there, you have the fate of the nation in your hands. Please, don’t sit this one out. Will Democrats cheat? Is grass green? Is the sky blue? Yet, as is always the case in places Democrats are prone to cheat, the antidote has always been to win by enough to overcome the cheating margin. So do YOUR part, and let God, fate, or whatever you believe in do the rest. Vote like your freedom and your way of life depends upon it, because they most certainly do.