Scott Morefield
|
Posted: May 04, 2020 12:01 AM
Share   Tweet
The opinions expressed by columnists are their own and do not necessarily represent the views of Townhall.com. 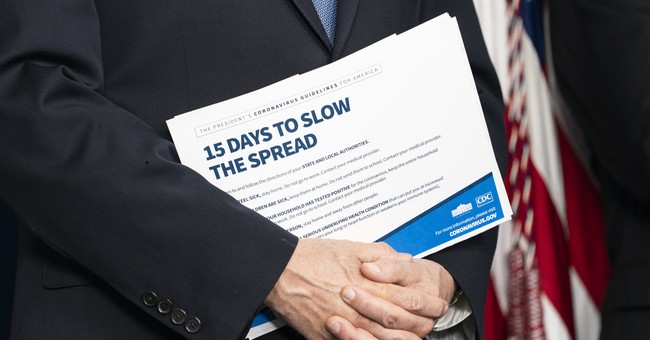 Editor's note: This is the second column in a series. The first column can be read here.

In a theme that continues to be tragically borne out with each passing day of our government’s overbearing, one-size-fits-all coronavirus pandemic response, few things these days seem to actually make any logical or scientific sense. In case you missed it, last week’s “Part I” column covered the government’s draconian response, bankrupt hospitals, and the government happily hampering any future recovery by paying people more money not to work. Stopping there, however, would have lent short shrift to the seemingly endless insane and infuriating inconsistencies of the past two months. So here are a few more, just to get your blood boiling just a little bit hotter (you’re welcome!).

Dairy farmers are literally dumping milk into the ground, yet when my wife and I went to our local supermarket a few weeks ago we were limited to only one gallon - for our family of six, mind you. Ridiculous, preventable, mind-boggling coronavirus-related “supply chain issues” have been cited as the reason, and things have only gotten worse, not better, in the past several weeks. Farmers are now slaughtering and composting hogs because of coronavirus-related pork production plant closures. Cows and chickens too. Meanwhile, customers face shortages on store shelves, and prices for the meat that is available are about to skyrocket.

It’s not a simple problem, and it won’t be a simple fix. But if we learn one thing from all this in the long-run, maybe it will be that meat processing shouldn’t be in the hands of a few giant companies, particularly foreign-owned ones. From a common-sense perspective, relaxing regulations enough to keep customers safe while allowing a shorter, more local and direct route from animal to the end-use customer is probably the way to go. Maybe our overlords will learn these lessons and make the appropriate adjustments before we enter a national famine, but I’m not optimistic.

Sure, the roads are emptier these days, but when you do venture out to shop at the few places you’re ‘allowed’ to go, have you noticed that your local grocery store, Walmart, Sam’s Club, and especially Lowe’s and Home Depot all seem to be MORE crowded than ever? Sure, some try to spread everyone out, but it’s hard to spread out all that much when you can barely turn around without bumping into some other cabin-fever afflicted citizen just desperate for an excuse to leave the house. Since most people can’t go to a park, restaurant, clothing store or pretty much anywhere else, going ‘anywhere’ becomes going to the only places allowed to remain open, thus potentially worsening what authorities claim they want to prevent. In effect, our betters have decided that crowding everybody into a few specific locations is better than trusting informed, adult humans to be responsible. Go figure.

The issuance of so-called “immunity certificates” has been a bandied-about way for medical experts like Dr. Fauci and others to ‘approve’ the reopening of society absent a vaccine or effective treatment. In effect, one would need to have such a certificate to, as USA Today notes, “safely return to work, eat at restaurants and partake in activities prohibited by social distancing restrictions.” Otherwise, prole, you need to remain cooped up in your house or apartment, jobless, for the undefinable future.

Interestingly, Dr. Marc Siegel, a frequent Fox News correspondent, argued for such a system on air a few days ago. I tweeted the clip at him along with the question: “If 'immunity' is what it takes to 'get' to go back to work or to a restaurant, what would stop non-high risk people from seeking out the virus to obtain their freedom?” I’ve not gotten a response and I don’t expect to because there really isn’t a logical answer. Perhaps such a system is hypothetical and unlikely to actually happen, but how many things have happened in the past two months that we never thought would? If it came to a choice between being required to continue to quarantine or contracting the virus and gaining one’s “freedom,” most low-risk individuals, including myself, would probably choose the virus any day. It simply isn’t a significant risk for me and the vast majority of people.

Meanwhile, these same medical professionals blast their fellow medical professionals who argue for the concept of obtaining herd immunity, of spreading the virus at a reasonable rate and cloistering the vulnerable, thus allowing it to pass through and society to reemerge quicker and less affected by the negative effects of economic lockdowns. Sweden did it, and quietly became a World Health Organization “model” of effective response. You probably haven’t heard about that, however, because it doesn’t fit their desired shutdown narrative.

“We must flatten the curve,” they said as their mandate went from “two weeks” to “another month” and beyond in some places. “We don’t want our hospitals to be overwhelmed, because if that happens they won’t be able to treat trauma patients or anyone else.” They never told us, however, that hospitals would lay off employees and risk closure while delaying procedures and keeping beds open for COVID patients that never arrived (see last week’s column). They also never told us they would move the goalposts from “flattening the curve” to steadily declining and even zero cases. Headlines like “Tennessee Reopens Despite XXX New Cases Reported” dominate the news even though the majority of these “new” cases are simply data dumps and/or the results of increased testing. If “flattening the curve” had really been the goal, America would have been back to work several weeks ago. Instead, the current approach makes herd immunity impossible and ensures the increasing likelihood that we’ll be living with this virus for years to come.