What Does The Bible Say About False Accusers And #BelieveWomen?

Scott Morefield
|
Posted: Oct 08, 2018 12:01 AM
Share   Tweet
The opinions expressed by columnists are their own and do not necessarily represent the views of Townhall.com. 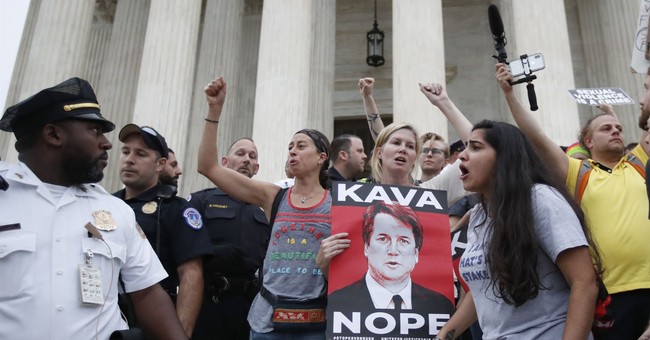 Despite the best efforts of unhinged leftists - the nature of which was perhaps most aptly demonstrated by the hysterical howls of the Shrieking Banshee Brigade coming from the Senate gallery right before Saturday’s final vote - Judge, er, Justice Kavanaugh was finally confirmed to the Supreme Court of the United States.

It was a tough fight, one in which liberals pulled out literally every possible stop to win. They thankfully failed, but this crucial victory didn’t come without several disturbing trends, perhaps the most notable being the fact - and this has been brewing ever since the #MeToo movement started - that we are apparently supposed to #BelieveWomen every time they decide to make a claim about a man. That’s right - no matter how outlandish, no matter how far removed by time, no matter how politically motivated, if a woman says it, it’s true and it totally happened exactly as she said it did. And if you don’t believe it, you’re a sexist pig.

It’s an odd, patronizing, dehumanizing claim, actually. To attribute perfection to half the human population when the truth is so obviously different - as anyone with a daughter knows - is patently absurd, and dangerous. And yet here we are, for all intents and purposes being called heretics for acknowledging that, indeed, women can and do lie about men. And sadly, the more “power” some unhinged members of the opposite sex think they have to destroy men for some real or perceived wrong, the more men will be falsely accused and unnecessarily railroaded.

“Believe women,” they chant, like cult members, or Benedictine Monks. It’s a new religion, the tenets of which you deviate from at great risk to being considered a “good person” by the politically correct enforcers.

But since we’re on the subject of heresy, orthodoxy, and religions, how about one liberals aren’t quite as familiar with - you know, Christianity? Remember that? Before liberalism began tearing it down, it’s the religion that literally built Western Civilization. So, what does the Christian holy book - the Bible - say about false accusers?

Well, a good place to start would be the whole “Thou shalt not bear false witness against thy neighbour” thing, no less than one of the Ten Commandments.

A commandment that Potiphar’s wife clearly broke when she accused Joseph of attempted rape after he refused her advances - leading to an innocent man being imprisoned. Of course libs probably consider her a “survivor” too, or something.

Then there’s Proverbs 16:19 - one of the things the wisest man to ever live wrote that God hates is “a false witness who breathes out lies.”

And Moses: “You shall not spread a false report. You shall not join hands with a wicked man to be a malicious witness.” - Exodus 23:1

And John the Baptist: “And he said unto them, ‘Do not extort money from anyone by threats or by false accusation, and be content with your wages.’ - Luke 3:14

The Bible, New Testament and Old, also seems pretty clear about the concept of establishing evidence. So people, you know, don’t get railroaded.

“A single witness shall not suffice against a person for any crime or for any wrong in connection with any offense that he has committed. Only on the evidence of two witnesses or of three witnesses shall a charge be established.” - Deuteronomy 19:15

“This is the third time I am coming to you. Every charge must be established by the evidence of two or three witnesses.” - 2 Corinthians 13:1

(To be clear, as this relates to Kavanaugh, nobody is saying there should be an additional human witness for a sexual assault allegation to be valid, but the lack of any corroborating evidence in this situation - which would have served as the additional “witness” - easily would have caused any case against Kavanaugh to fall short by any Biblical standard.)

Oddly enough, although both are bad, the God of the Bible seems to be more concerned with not punishing the innocent than it is with letting a guilty person go free. Of course, it’s a total coincidence that the concept is a hallmark of the American judicial system.

As to those who bear false witness, it’s quite obvious God strongly disapproves, considering that Deuteronomy 19:18-19 proscribes the punishment: “The judges shall inquire diligently, and if the witness is a false witness and has accused his brother falsely, then you shall do to him as he had meant to do to his brother. So you shall purge the evil from your midst.”

It’s a bit tougher than a seat on the Women’s March committee, but then again it’s pretty harsh to be falsely accused of being a serial rapist, as Brett Kavanaugh was. (To any libs reading this, kindly stop your whining about Kavanaugh not having been on actual trial. It’s a straw-man and you know it. Those accusations carried real-life consequences, even if his liberty wasn’t at stake. Besides, does anyone truly think libs wouldn’t have really put Kavanaugh on trial for his liberty had they been able?)

Which brings us to the wise words of liberal attorney and Harvard law professor Alan Dershowitz:

“She could misremember. He could misremember. I’m not in any way accusing her of anything wrong,” Dershowitz told Fox News on Saturday, speaking first of Blasey Ford and Kavanaugh before launching into an obvious case of false witness - Avenatti client Julie Swetnick. “The sexual McCarthyism came from people like Avenatti and his client. There is certainly a possibility — a possibility — that she may have made that up out of whole cloth. Never met the man. Didn’t travel in the same social circles.”

“I want the FBI to look into that because the #MeToo movement needs to understand there’s no genetically linked lying gene or truth telling gene and if a woman deliberately and willfully falsely accuses somebody of sexual misconduct, there have to be consequences,” continued Dershowitz.

Given that President Trump himself is more than a little “woke” to the issue (thanks, lefties!), maybe we’ll get something done.

“I would love to see our libel laws get toughened up so you can take people [to court],” Trump told Jeanine Pirro on Saturday. “But [Avenatti] made the same thing, totally false statements. You look at what happened and yes, I think they should be held liable. They should be held to the highest standard. You can’t go around and whether it’s making up stories or making false statements about such an important position, you can’t do that. You destroy somebody’s life.”

The facts and common sense, of course, agree with the Bible on this issue. Although sexual assault allegations should be investigated and taken seriously, so should people who falsely accuse innocent people of crimes. It’s high time to move the pendulum back to the middle on this critical issue. Doing so could be a small silver lining to the Kavanaugh fiasco.