Scott Morefield
|
Posted: Aug 06, 2018 12:01 AM
Share   Tweet
The opinions expressed by columnists are their own and do not necessarily represent the views of Townhall.com. 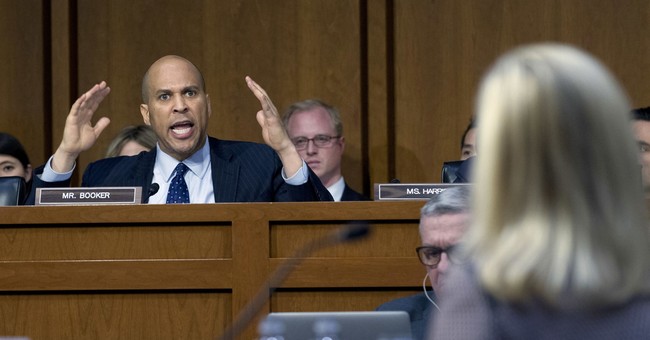 We all know most liberals are hypocrites, but they can’t help it, not really. After all, hypocrisy is intertwined into the very essence of holding to policy positions so utterly nonsensical on their face that defending them requires pretzel-shaped distortions of reality that would make a circus acrobat shudder.

But among a sea of hypocrites, some are more hypocritical than others.

Enter Senator Cory Booker, who was recently photographed at Netroots Nation - that gathering of Lenin wannabees, each of whom hoping to top the last one’s efforts to come up with a nuttier way to purge the kulaks for good this time - holding a sign bearing a pro-Palestinian movement slogan.

Booker reportedly posed with Leah Muskin-Pierret, the government affairs associate for the U.S. Campaign for Palestinian Rights, an organization which “endorses the Boycott, Divestment and Sanctions movement targeting Israel.” The image went viral after appearing on the Twitter feed of the U.S. Campaign for Palestinian Rights, a self-described “coalition of 330+ groups” working “for a US policy toward Palestine/Israel based on freedom, justice, and equality.”

“From Palestine to Mexico, all the walls have got to go,” the sign read, because liberals love slogans that rhyme, and also because - shocker of shockers - the liberals who created this particular sign are logically consistent on this issue. If you are against walls, you should be against ALL walls, right? That means the Israeli wall, or barrier, dividing the West Bank from Israel proper, and that also means any barriers that divide the United States from its neighbor to the south, Mexico.

Except Senator Booker, who is a “favorite speaker at Jewish and pro-Israel groups” (according to the Jewish Telegraphic Agency) and an open supporter of Israel and the Jewish community, now had some ‘splainin’ to do.

And explain he did, like a good liberal pretzel. Booker, who also has taken some fire for voting against a bill to reduce funding for the Palestinian Authority, now claims he wasn’t aware that the sign called for an end to the border wall between Israel and the Palestinians, but rather was referring only to a U.S. border wall with Mexico.

Because there are two kinds of liberals when it comes to Israel’s border wall - the kooky yet consistent kind that believes in no walls at all, and the kind that, like Booker and his ilk, believes that Americans have no right to a secure border, but Israel does.

“Just before delivering a speech in New Orleans, Senator Booker was approached by dozens of people for photos,” Booker’s spokesman, Jeff Giertz, told the JTA via email.

“In one instance, amid the rush, he was posing for a photo and was passed a sign to hold – he didn’t have time to read the sign, and from his cursory glance he thought it was talking about Mexico and didn’t realize it had anything to do with Israel,” said Giertz. “He hopes for a day when there will be no need for security barriers in the State of Israel, but while active terrorist organizations threaten the safety of the people living in Israel, security barriers are unfortunate but necessary to protect human lives.”

The incident, and the New Jersey senator’s subsequent pretzel-like “explanation,” serves as a revealing insight into the rank hypocrisy of U.S. border wall opponents like Booker, and it opened several avenues for conservatives to pounce.

“Well then, @CoryBooker, be sure to unlock your doors tonight,” tweeted Woods. “Walk it like you talk it. #OpenBorders #OpenDoors.”

In other words, [border] security for me, but not for thee, and all that.

Ironically, Booker cites the presence of “active terrorist organizations” that threaten the safety of the Israeli people as a reason for their border wall, conveniently forgetting that MS-13 and, well, pretty much any criminal or terrorist group that wishes to can currently waltz across the US - Mexico border at will.

The pretzel-shaped position of many liberals, Jewish and otherwise, on the Israeli wall versus a U.S. - Mexico one is summed up nicely by the Jewish Telegraphic Agency: “Supporters of Israel reject comparisons between the Israeli security barrier – which they credit with virtually ending terrorist attacks within Israel – and a wall on the Mexican border largely seen as a bid to stop immigration overall.”

As if Israel would or should allow unfettered immigration into its borders. It doesn’t. It shouldn’t, and neither should the United States. And people who care about the security of both countries should at least make some effort to be consistent on the issue.

"The wall is necessary," President Trump said, “because people want protection and a wall protects. All you have to do is ask Israel."