As We Remember Our Heroes This Memorial Day, Let’s Also Remember How Precious And Fragile Liberty Is

Scott Morefield
|
Posted: May 28, 2018 12:01 AM
Share   Tweet
The opinions expressed by columnists are their own and do not necessarily represent the views of Townhall.com. 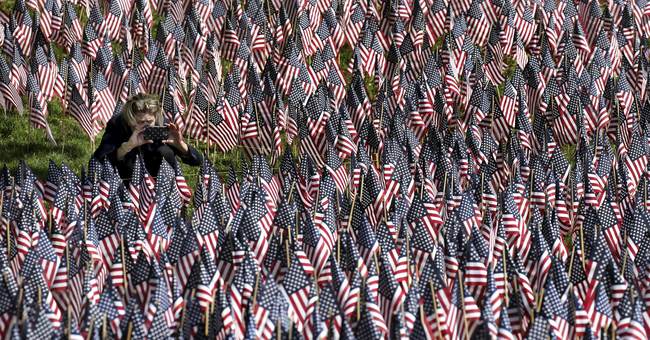 “Guard with jealous attention the public liberty. Suspect everyone who approaches that jewel. Unfortunately, nothing will preserve it but downright force. Whenever you give up that force, you are inevitably ruined.” – Patrick Henry

“Those who would give up essential Liberty, to purchase a little temporary Safety, deserve neither Liberty nor Safety.” – Benjamin Franklin

In May 1942, with the U.S. Pacific fleet down to just three carriers after heavy losses incurred at the Battles of the Coral Sea and Midway, the USS Wasp, after having distinguished itself in the Atlantic war, embarked to fight the Japanese in the Pacific.

After a hard fight at Guadalcanal, three Japanese torpedoes hit the Wasp head-on. Fires spread quickly thanks to the incredible amount of oil and gas released from the tanks by the direct hits, and it wasn’t long before the ship’s fate was sealed. My grandfather, Harding Morefield, was forced to jump into the ocean after his hair caught on fire. When the ship’s captain, Forrest P. Sherman, ordered the abandon ship, the only delays were caused by the crewmen who didn’t want to leave until every single wounded soldier was brought to safety.

When the foundering, desperate Germans cut through the Ardennes to surprise American forces in December 1944 with what would be their last major offensive of the war, my wife’s grandfather, a young infantryman named George, was shot in the leg. Because the units in the area were caught by almost complete surprise, George languished in the snow for 12 hours before being rescued. He lost his leg in the battle, but 19,000 other Americans lost their lives.

There are millions of stories like this, interwoven throughout the histories of millions of American families. Most of us have ancestors who were willing to fight and die for something they saw as bigger than themselves, a nation where they, their families and their descendants could live in freedom. From the patriots who risked their lives and sacred honor to found a new country based on liberty and justice to today’s brave soldiers who willingly sign up to fight an enemy that doesn’t always even wear a uniform or adhere to the laws of war, courage and sacrifice are what founded our nation and made it great.

Our grandparents were heroes to us, of course, and in many ways today’s pampered generation can barely imagine the sacrifices they endured. My wife’s grandfather who lost his leg was said to have never complained about his situation, at least within earshot of his family. To them, he would have gladly given his other leg for his country.

But they, along with most everyone who survived the horrors of war, would never tell you they were heroes. No, they’d probably say they were lucky, because to them it didn’t seem like there was any real rhyme or reason to those who got to go home and those who got buried on a European battlefield or dumped into the Pacific ocean, or even those who left a leg in some makeshift military hospital in Belgium. To them, the real heroes were the ones who gave all they had to give in places like Khe San and Hamburger Hill, Normandy and Bastogne, Belleau Wood and Flanders, Manassas and Gettysburg, Bunker Hill and Yorktown.

Crosses in their honor are planted in fields all across Europe, and in Lee’s old farm in Virginia, their lives cut off in the flower of their youth, their deaths mourned by family members who would never see them again.

The real heroes - they would say - never came home.

American industrialist Henning Webb Prentis Jr. once described the historical cycle as, “from bondage to spiritual faith; from spiritual faith to courage; from courage to liberty; from liberty to abundance, from abundance to selfishness; from selfishness to apathy, from apathy to dependency; and from dependency back to bondage once more.”

This Memorial Day weekend we should certainly remember our slain heroes, but we should also consider whether our fragile, dependent generation has the same mettle as our ancestors. Because if not, and if Prentis is correct, we’re about to enter a period of bondage unlike any mankind has experienced.

As we enjoy an extra day off work and fire up the barbecue, may we not only remember the heroes who gave everything so we could live in a country founded upon and defined by liberty, may we also acknowledge just how precious and easily lost that liberty is. May we remember that freedom is something that, once lost, is never freely returned by those in power.

It is always born of blood.