Scott Klusendorf
|
Posted: Mar 21, 2016 9:13 AM
Share   Tweet
The opinions expressed by columnists are their own and do not necessarily represent the views of Townhall.com. 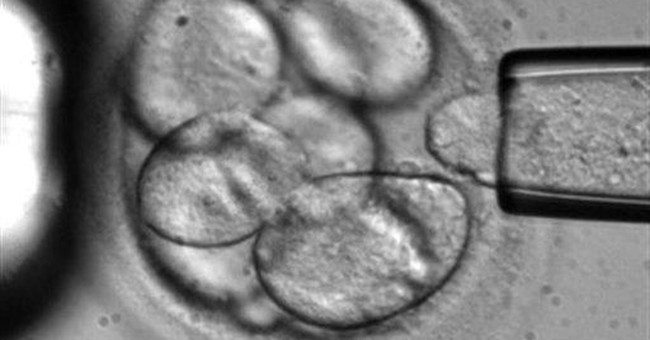 ONE HUNDRED years ago yesterday, Ota Benga killed himself.

His story is beyond horrific. In early 1906, eugenicists and racial anthropologists at the Bronx Zoological Gardens encouraged Ota—an African Pygmy—to play in a cage with a monkey. The thousands witnessing the display did not see a man. They saw “the missing link.”

A black minister, James H. Gordon, protested: “Our race, we think, is depressed enough, without exhibiting one of us with the apes …We think we are worthy of being considered human beings, with souls.”

The New York Times disagreed, insisting that Ota Benga was a lesser human:

“It is absurd to make moan over the imagined humiliation and degradation Benga is suffering. The pygmies…are very low in the human scale, and the suggestion that Benga should be in a school instead of a cage ignores the high probability that school would be a place…from which he could draw no advantage whatever. The idea that men are all much alike except as they have had or lacked opportunities for getting an education out of books is now far out of date.”

Unable to cope with his treatment at the hands of racists, Ota Benga ended his life ten years later on March 20, 1916.

Sadly, we have a long history of defining people out of existence who don’t look like us. A little over a century ago, many Whites thought it unthinkable that anyone would consider Blacks human beings. Consider this example from The Adventures of Huckleberry Finn, where Huck contrives a story to explain to Aunt Sally his late arrival by boat:

“We blowed out a cylinder head.”

“Well, it’s lucky; because sometimes people do get hurt.”

Notice it’s simply assumed the Black man is not one of us.

We're still assuming, only the victim class has changed. In her recent book Pro: Reclaiming Abortion Rights, feminist Katha Pollitt writes that abortion “is a good thing for society” because it’s “good for everyone” if women only have the children they want. Are the unborn members of that society? And does “everyone” include the unborn? Notice Pollitt simply assumes the unborn are not included in the human family.

Though dismissive of embryos as “pea-sized,” “lentil-sized,” and “shrimp-like,” Pollitt eventually concedes their humanity on pg.68: “Obviously, a fertilized egg is human—it isn’t a feline or canine—and it’s alive and it is a being in the sense that it exists.” But, like The New York Times of yesteryear, she does not think all humans are equal. Embryos fail to qualify because they are too small (“the size of a pea”), too undeveloped, can’t think or feel, can’t communicate, aren’t conscious, aren’t self-aware, don’t look like children, and don’t function like the rest of us.

But why is self-awareness, the ability to communicate, or body size value-giving to Pollitt any more than white skin was value-giving to Ota Benga’s critics? Suppose we pick self-awareness as decisive. Why shouldn’t those with more of that characteristic have a greater right to life than those with less—born or unborn? After all, development does not end at birth. As for appearance, human value does not turn on what an entity looks like, but what it is. John Merrick (Elephant Man) didn’t look human but undoubtedly was, while mannequins may look human but aren’t remotely so. Admittedly, an early embryo doesn’t look like an adult, but it does look exactly as a developing human should look like at that stage of development. Put simply, our intuitions can be mistaken. We must examine them in light of reason.

Philosopher Richard Stith suggests a thought experiment for rethinking our intuitions about the early embryo. Imagine you are on a Mexican safari in pre-digital days and you’ve got a Polaroid Camera. For those of you under 50, a Polaroid Camera was an awkward looking device that, once you shot a picture, would spit it out allowing you to watch it develop before your eyes—usually in about 90 seconds. At just the right moment, you captured a picture of a Black Jaguar leaping across the trail in front of you. Black Jags are almost never photographed, but you got it! While you are waiting for the picture to emerge, I rip the camera from your hands and tear up the emerging picture. Will you be angry? Suppose I replied, “That’s not a picture. It’s just a brown smudge on a piece of paper!” Will that satisfy you? Never! You’d rightly point out, “The picture of the jaguar was already there. We just couldn’t see it yet!”

Likewise, you were already there from the beginning. We just couldn’t see you.