Sally C. Pipes
|
Posted: Jan 15, 2022 12:01 AM
Share   Tweet
The opinions expressed by columnists are their own and do not necessarily represent the views of Townhall.com. 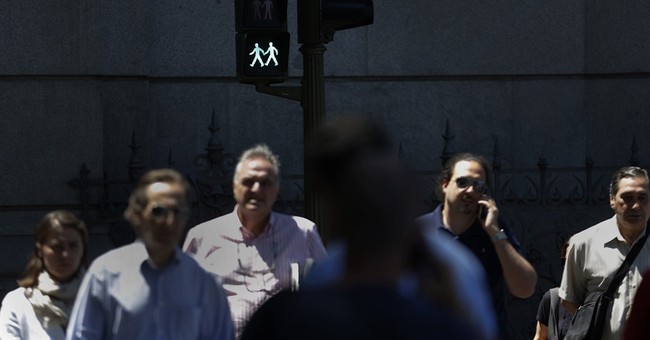 An American baby born today can expect to live 77.3 years, on average -- 1.5 years less than Americans born in 2019, and considerably less than newborns in other Western democracies like the United Kingdom, Germany, and France, where life expectancies at birth exceed 80 years.

What causes this discrepancy?

It's our lack of socialized medicine, say the folks at the Commonwealth Fund. The left-leaning think tank recently released a study that ranked the United States dead last on a variety of "health care outcomes" compared to 10 other developed countries. The central premise of the report is that foreign countries' government-run healthcare systems deliver better medical care than our mixed public-private system.

That's not true, though. America's hospitals and doctors actually deliver some of the highest quality care in the world. We have worse health outcomes for a variety of reasons that are mostly outside of healthcare professionals' control.

Consider the pervasive violence in American society. The United States is similar to other developed nations when it comes to overall crime rates. But our homicide rate is much higher. A 2015 study found that "the homicide rate in the US was 7.5 times higher than in the other high-income countries combined."

And that gap has almost certainly widened in recent years. In 2020, U.S. homicides increased an unprecedented 30 percent over 2019 levels. 2021 almost certainly exceeded even 2020's grim toll.

This sky-high murder rate isn't merely tragic -- it also makes it harder to compare America and other countries on hot-button issues like maternal health.

It's well-documented that American women are more likely to die while pregnant. But what's less known is that homicide is the leading cause of death for new and expecting U.S. mothers, according to the journal Obstetrics & Gynecology. Among pregnant and postpartum women, murder is responsible for more than twice as many deaths as bleeding or placental disorders.

Drug overdoses are another massive and comparatively unique contributor to American mortality. Overdoses kill 3.5 times more people per capita in the United States than other high-income countries, on average, according to a 2019 report that utilized 2013 data. Americans were a staggering 28 times more likely to die of overdoses than the Japanese. The report found that overdoses "made large contributions to the widening of life expectancy gaps" between the United States and comparable countries.

We also have much higher rates of obesity and a greater prevalence of diabetes, heart disease, and chronic lung disease. This has more to do with culture, diet, and exercise than medical care.

When it actually comes to cutting-edge medical treatment, the United States leads the world.

These higher survival rates are thanks partly to our higher screening rates, partly to our world-class surgeons and radiologists -- there's a reason that elite businessmen and politicians from around the globe head to places like the Mayo Clinic or MD Anderson for cancer treatment -- and partly to the advanced drugs our patients can access.

Our doctors and nurses may not be able to stop traffic accidents or prevent homicides. But they excel at treating the sick. Socialized medicine would only limit their resources -- and life expectancies would likely drop even more.

Sally C. Pipes (@sallypipes) is president, CEO, and Thomas W. Smith fellow in Health Care Policy at the Pacific Research Institute. Her latest book is False Premise, False Promise: The Disastrous Reality of Medicare for All (Encounter 2020). Follow her on Twitter @sallypipes.