Why Dems' Health Reform Hopes Are 'Hanging by a Thread' 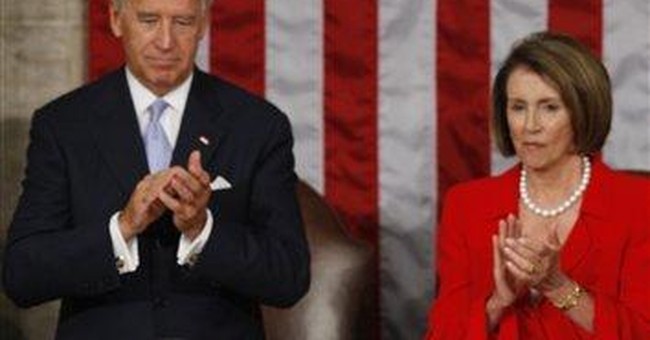 As the New Year unfolds and congressional Democrats meet with the President behind closed doors trying to reconcile the differences between the House and Senate versions, they also appear to have lost a good deal of the optimism they had just a few weeks ago about health reform's prospects. Sen. Chris Dodd (D-Conn.) recently said that healthcare reform was "hanging by a thread." And on the other side of the Capitol, Rep. Charlie Rangel (D-N.Y.) said, "We've got a problem . . . A serious problem." Negotiations over a final bill may well drag into February.

This discord within the Democrats' ranks offers Americans a renewed opportunity to learn about the sweeping changes augured by the congressional reform package. What they'll discover is a bill that hikes taxes to pay for "reform," making health care more expensive and less responsive to patients' needs.

New insurance regulations form the core of the reform plan. Paramount among these new rules is an individual mandate, which would require all Americans to maintain coverage. Proponents of the idea claim that it will bring healthy, previously uninsured young people into the insurance pool. Premiums from these folks would help lower the premiums of older, sicker Americans -- or so the thinking goes.

Unfortunately, these regulations would make both the uninsured and the majority of the middle class worse off. Most uninsured Americans go without coverage not because they want to but because they can't afford it. The Democrats' reform package does nothing to address this problem. In fact, health insurance costs would grow faster under the Senate bill than they would without reform.

People who refuse to buy insurance would be fined anywhere from $95 to $2,250 a year. By the time the fines are fully implemented, a typical individual insurance policy is expected to cost about $5,000, according to the Congressional Budget Office (CBO). Americans faced with the choice of forking over thousands of dollars a year for unaffordable coverage or paying a fine will likely opt for the latter. Other proposed regulations on insurance policies make such an outcome even more likely. Case in point: the reform plan's requirement that insurers accept all applicants, regardless of their health status or medical history.

That may sound fair, but such a provision encourages people to go without insurance until they actually need it. Why put out $5,000 on coverage you may never use if you can just pay $95 and pick up a policy down the line if you become ill?

These and other new insurance rules would increase the price of coverage for everyone -- not just the uninsured. Consider a 25-year old male living in Richmond, Virginia, for instance. Research using actual enrollee data from WellPoint, a large insurer, revealed that the major health insurance reforms under consideration would cause this hypothetical man's premiums to increase by 155 percent.

His peers in other states would experience similar increases. A healthy young man in Indianapolis, Indiana, would be saddled with a 178-percent premium hike. And a similarly situated man in Los Angeles, California, would see his premiums go up 106 percent. Families with children would also get hit with higher insurance bills. The same series of studies found that a two-child family living in Milwaukee, Wisconsin, would see its insurance tab more than double. A family with two kids in Richmond would face an insurance bill that's 82 percent higher. Other portions of the reform package would send health costs even higher. Medical device makers are being slapped with $20 billion in new taxes, and pharmaceutical companies are expected to kick in $80 billion to fund reform. These firms will undoubtedly raise their prices in order to offset the cost of these new government levies. And if insurers face steeper charges for their beneficiaries' drugs or medical devices, it's only natural that premiums will go up too.

Last week union leaders met with President Obama to complain about the Senate bill's 40 percent excise tax on "Cadillac" plans and how that would negatively affect their members. Now it appears that a tentative deal has been reached which would exempt unions' collective bargaining agreements from this tax. In order for the plan to be deficit neutral, revenue will have to be raised from other sources. A likely target will be the Medicare payroll tax, which was already going to be increased by 0.9 percent to 2.35 percent in order to fund the previously raised exemption. If accepted, the Medicare payroll tax will have to be raised even higher to cover the lost funding.

The give-and-take of the legislative process rarely produces perfect results, but the health reforms offered by congressional Democrats aren't just less-than-perfect -- they're worse than the status quo. Americans should hope that the thread from which the Democrats' reform package is hanging snaps soon.