Salena Zito
|
Posted: Apr 07, 2020 12:01 AM
Share   Tweet
The opinions expressed by columnists are their own and do not necessarily represent the views of Townhall.com. 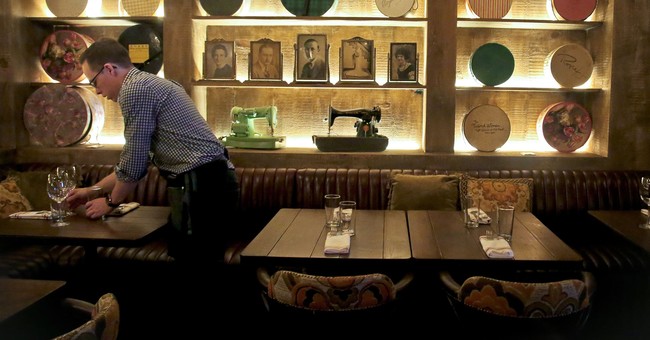 BROTHERSVALLEY TOWNSHIP, Pennsylvania -- Anyone who drives along the narrow, winding township road just off of U.S. Route 219 immediately finds themselves whisked back in time, if only for a moment, as their car enters the Burkholder Bridge.

The 150-year-old structure has cherry-red shingles; a charming sign bearing its name across the arc of the roof; and alabaster white sidewalls, which are distinctive because their openness allows much of the structure to be exposed. In theory, some would say this covered bridge has surpassed its usefulness in the modern world. Its 3-ton weight limit and 8-foot height limit restrict many vehicles from passing over Buffalo Creek.

Like some things in this country that are past their expiration date, it has been preserved. As times change with new industries, technologies and opportunities, many other relics have been removed from our landscape and our memories. Or they've decayed in front of us as change and neglect forced them to rot back into the earth.

Change is like that. Tiny towns like this one in Somerset County, and larger towns such as Cumberland, Maryland, or the Ohio towns of Youngstown and East Liverpool, once had very different purposes. As the world changed and moved forward, it left them behind.

Cumberland was once the second-largest city in Maryland. It was the gateway to the West, the jewel of the American frontier, the center of the railroad industry.

East Liverpool was once the Pottery Capital of America, with over 300 pottery companies manufacturing the finest china in the world. Last week, in the midst of all the calamity that is the coronavirus pandemic, the Hall China Company, which has been there for over 100 years, was bought by a company that will produce the iconic dinnerware in England, Mexico and China.

Youngstown was the center of this country's manufacturing universe for over 100 years. You can thank Youngstown and every town up and down the Steel Valley for supplying not just the materials but also the blood and sweat that built this country from the dawn of the Industrial Revolution to the post-World War II building boom.

These are the cities and towns and counties that for years have scrambled to hold on to the churches that anchored their neighborhoods; the barbershops that served their families for three generations; and the family restaurants where they had their weekly night on the town and their kids had their first part-time job.

They were the places where fathers and grandfathers staffed men's guilds to support the local parish festivals, where the women's guilds planted flowerbeds to beautify the towns and where the youth groups cleaned up litter dumped on roads by strangers passing through.

They held on dearly to the local institutions as long as they could or wept as they shuttered along with the manufacturing employers. All the while, they were made to feel backward or foolish for wanting to hold on to the past. The cosmopolitan class mocked them for not moving away from a dying town or adapting to change faster.

When we come out of this pandemic, no matter where we live, whether it's New York City or Newville, Pennsylvania, our landscape and society will have changed forever.

That dry cleaner where you dropped your shirts off to be pressed every week may never open its doors again. The deli that makes your favorite tuna melt might not have one ready for you right you walk in the door every Friday at lunchtime. The waitress who knew you by name may have moved back home with her parents because she couldn't afford that apartment anymore, even when she shared it with three other girls.

The economic and emotional change we typically see in this country is a slow erosion of a town, city or village. First comes the loss of major employment, and if there is nothing to replace it, then comes the collapse of the place. For people rooted in the Cumberlands, Youngstowns and Brothersvalleys of this country, these places have value because that rootedness defines them.

Now the coronavirus pandemic is accelerating that erosion up to warp speed.

Maybe it will eliminate one aspect of that divide between the placed and the placeless, the latter of whom enjoy a mobile life and focus on lofty ideals and global policies. The placeless may find themselves understanding how the placed have felt all along, worrying about crumbling institutions all around them and the long-term damage to their community and city.