Salena Zito
|
Posted: Mar 12, 2019 12:01 AM
Share   Tweet
The opinions expressed by columnists are their own and do not necessarily represent the views of Townhall.com. 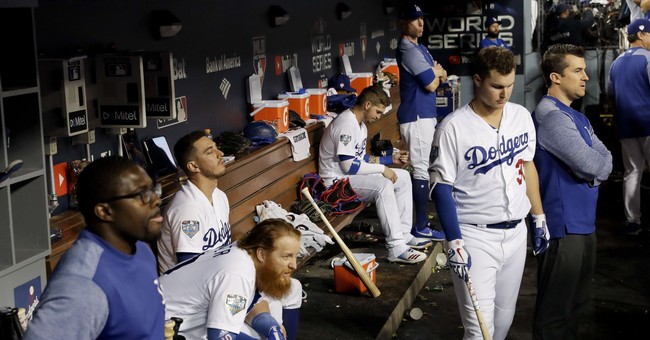 PITTSBURGH -- Baseball is always held up as a metaphor for life in America. The struggles and disappointments, along with the workaday perseverance, form clear parallels.

Baseball historian David Pietrusza once told me that like baseball, America is all about hope, necessarily tied up with effort and disappointment.

Baseball is a game without a clock. It's never over until the final out. And no matter what the score is, there's always a chance. Hope is the 10th guy in every lineup.

Like many traditions in American life that have changed with the times -- such as knowing you can stay and prosper in the same town that your father's father's father did -- the idea that your favorite player will be in the outfield playing for your home team his entire career is also a thing of the past.

Brad Todd lives in the Washington area, and his 9-year-old son's favorite player, Bryce Harper, just traded his Washington Nationals jersey for a Philadelphia Phillies jersey and a $330 million contract. This brings back memories for Todd.

"I can remember the date, the day and where I was," he said, a lifelong Atlanta Braves fan and co-author of our book, "The Great Revolt." "It was August the 3rd, 1990. I was a college student working a summer job at a newspaper, and I remember when, all the sudden, I saw it pop up on my screen that Dale Murphy had been traded, ironically, to the Philadelphia Phillies, and I looked up and everyone in the newsroom was staring at me. They had already seen it and were waiting on my reaction."

But the situation is worse for his son.

He said, "Murphy was at the end of his career. And so I still knew that he would be a Braves legend, and not somebody else's legend. And that's the problem I think with Harper. These kids thought that he would play for their team forever, and now he's going to end up spending the bulk of his career playing for their rivals." The Phillies and the Nats are both in the National League East division.

Since free agency came about in the '70s, it has been a mournful rite of passage for young and old fans. This paralleled the broader phenomenon of more Americans leaving the place they grew up and thought they'd stay, having either been pulled away by opportunity, or pushed out by automation or foreign competition.

George Will, the Washington Post columnist who wrote the book on baseball "Men at Work," says free agency may be one of the best things that happened to baseball. He explained in an interview: "It has, after much tweaking and accommodations, I think, contributed a competitive balance. It has made baseball more interesting. But even if it had done neither, it would be a good idea, because it's elemental justice that the reserve clause denied. Which is the basic American right to negotiate terms of employment with the employer of your choice."

Will, who saw his first game at Forbes Field here in Pittsburgh, knows there are plenty of 9-year-old broken hearts across the country every time this happens. "What we learn about baseball is that people are loyal less to particular players and more to the uniform and the logo and the stadium and the whole thing that goes with a team," he says.

This is likely why in culture, you find loyalty to hometowns in other cities in the most peculiar ways. For instance, the 1,500 Steelers bars that are located across the country provide a way to connect what was lost after thousands and thousands of families were forced to leave when manufacturing collapsed here in the 1970s.

Washington is a jaded city. The adults are going be disappointed but not surprised, and will move past it. But in the end, baseball is a game that lives mostly in the imaginations of little kids and the little kid in all of us. And for that little kid, the loss of a lefty slugger is a little taste of the common sad story of losing hometown things we love.

Why Fox News' Segment With a Top House Republican Was an Extreme Disappointment
Townhall
DC attorney general says busing asylum-seeking migrants to the district 'is creating a humanitarian crisis'
Twitchy
Stacey Abrams Commits a Disqualifying Self-Own in Desperate Attack on Brian Kemp
Redstate
UKRAINE WAR: Russia's Saki Air Base Blew Up and No One Knows How
PJ Media