Salena Zito
|
Posted: Sep 01, 2018 12:01 AM
Share   Tweet
The opinions expressed by columnists are their own and do not necessarily represent the views of Townhall.com. 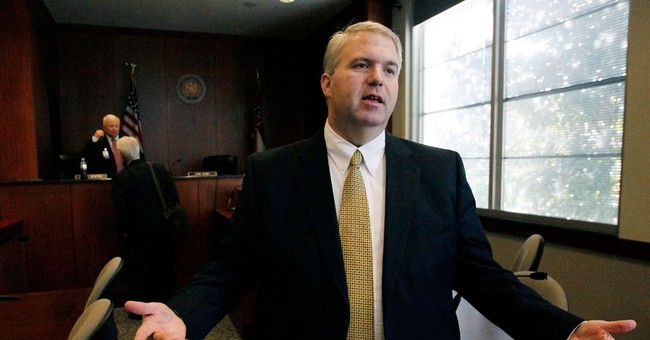 NETTLETON, Miss. -- "When you got the last name Presley everybody's gonna get the question, are you related to Elvis? People definitely know I'm related, but I hope that ain't just all they know me for."

Meet Brandon Presley, who at age 23 was the youngest mayor in the history of this small northeast Mississippi town that straddles both Lee and Monroe Counties. He's currently the public service commissioner for northern Mississippi. And, yes, he's the cousin of Elvis Presley.

"My granddaddy and Elvis' granddaddy where brothers," he explains. "In fact my grandfather carried Elvis and Gladys down to visit Vernon, his daddy at the state penitentiary, when he did a little time for altering a check."

They never met; he was born one month before Elvis died in 1977.

Presley, 41, is also a Democrat in a state that is a sea of Republican voters. He has voted for Democrats all of his life -- including former President Barack Obama and Hillary Clinton -- and is doing OK despite his party affiliation.

"Well for one thing, problems aren't a political party, right? Take trying to get broadband in the rural parts of this state isn't a partisan problem, it's a community or regional problem, and that is what I do," he said, darting between meetings with utility companies who hold the keys to solving that issue.

Nettleton is located just 15 or so miles down the state highway from Tupelo, Mississippi, where "The King" was born. It's a small, racially mixed town where high school football is king and the challenge of keeping the beast of poverty at bay is no different than that in any other rural American small town.

It was a challenge his family was unable to beat. He explains: "I grew up in pretty much complete poverty. We would go weeks without electricity. I have vivid memories of going to the laundromat in town, and going to the hydrant out back and filling up a 3 liter ... So we would have water to semi-bathe with."

The floors in the home were rotted; they didn't have a telephone until he graduated high school in 1995.

"My daddy was murdered on my first day of the third grade," he explains. "So my momma was a single mother working at a garment factory. The entire time that I grew up, she both taught kindergarten at a church daycare, but she mainly worked in a garment factory one block from our house."

His father, Arnold Presley, who he candidly admits was a tough character, was shot and killed by a man who owed him money. "My daddy had a pretty tough reputation," he says and leaves it at that.

Brandon Presley says he has had an interest in politics since the day he was born, and that he was "born a Democrat."

He is proud to say that, and he doesn't hide his votes for Obama and Clinton. But he grows weary of the national party not listening to voters like him who are still pro-life and pro-gun and don't look at law enforcement as the enemy.

His voting record is pretty conservative as well. He has voted against more rate increases than any other commissioner in the history of the Mississippi Public Service Commission, an elected body in three separate geographic districts that regulates telecommunications, electric, gas, water and sewer utilities.

As mayor, he gave the town its first property tax cut in the entire history of the city. "I'm a very, very fiscally conservative person. At the very same time I believe in delivering services," he said, making him a "Proud New Deal Democrat."

So he is really is your grandfather's Democrat.

He is frustrated that his party has lost its ability to speak to the economic populism that President Trump used to appeal to a wide variety of voters, including Democrats that live in his district.

As he contemplates the state of his party, which dominated Mississippi so much that it held the office of the governor for 116 straight years and the State House for an additional 20 years, he thinks the way to win back voters for Democrats does not begin by belittling them.

"You can never insult someone into voting for them," he says of how voters are treated when they vote for any Republican, in particular Trump, or are still pro-life and pro-gun.

"And that goes both ways," he says. "(W)hat we are missing in this country is a pure old dose of politeness. You may rightfully disagree with someone, but the better strategy to win back Main Street voters, is show them a better pathway, you got a heck of a lot of better chance to win voters to your side, just by being respectful."

His message for his party is simple: "Well, I think we've got to get back to your roots. Face reality. And reality is that I think we've ignored a wide swath of blue-collar, hardworking people who feel left out in the process. Honestly folks, they feel ignored. I think you can't ignore people when they are supporting you politically. You can't ignore them into it. You can't be derisive to people."

What's next for him? Maybe a run for a bigger office. Maybe.

"Stay tuned," he says, with a promise to not be anyone else but himself if he does run. "The party isn't going to try to change me from Washington, I'm just too dang independent."