Salena Zito
|
Posted: Aug 28, 2018 12:01 AM
Share   Tweet
The opinions expressed by columnists are their own and do not necessarily represent the views of Townhall.com. 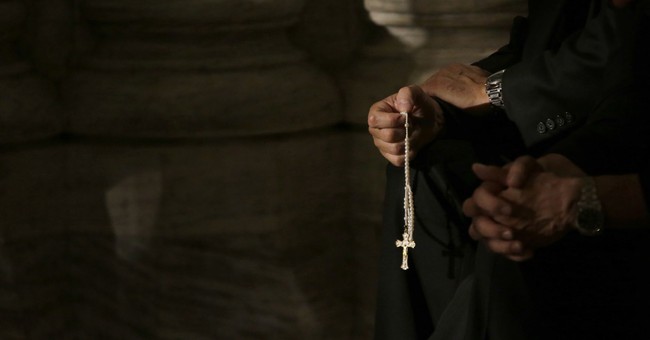 PITTSBURGH -- Last Sunday, a city parish on the top of a steep hill overlooking the neighborhood aptly named Observatory Hill waited for her faithful to arrive for Sunday Mass, as it has every Sunday for over 102 years.

It was 9:00 a.m., just a handful of days after a report was released by the Pennsylvania state grand jury on alleged sexual abuse in 54 of the state's 67 counties, a report that has rocked this tight-knit community.

Some came to Mass. Some did not. Those who did had difficulty holding back tears.

The somber music played by the organist reflected the silent despair in the pews.

The parish had been hit hard in the 884-page report. The report identified over 1,000 children who became victims of more than 300 abusive priests in parishes large and small across the state.

This compounded the losses the parish has suffered as the neighborhood's population has become more secular and transient -- a big change from the working-class Catholic population who walked to Mass there in the 1960s and 1970s.

That's when I attended Nativity of Our Lord, over on Pittsburgh's North Side. I adored father John Maloney, a young priest who came to our church when I was 5 years old, and going to church at 5 meant different things than it does to an adult. For me it was the honor of wearing a lace covering my head the way the grown-up women did. (Before Vatican II, it was mandatory for women.)

But it was also the mysterious rhythms of the Latin Mass that seemed to be telling sacred secrets. Mass meant being with my parents, sometimes my entire extended family of aunts and uncles and grandparents -- all warm, comfortable, safe feelings that helped draw me into what faith would mean for me as an adult.

As I entered first grade, father Maloney was the parochial vicar (vice pastor). He said Mass every Tuesday for the entire student body of a parish that was at its peak, absorbing the blue-collar baby-boom children in the 1960s.

Before school and during recess, we would play on the asphalt playground that was attached to the parish school. It was sloped at an odd angle and littered with loose rocks, but we didn't ever seem to notice.

Sometimes, if we were lucky, father Maloney, who was just 22 years old, would come out and watch us play, as we jumped rope, picked teams for dodgeball or played a vigorous game of tag.

We were taught to respect and revere his station. It wasn't hard; he was young, handsome and charismatic. When he talked about the Scripture or Jesus, he made you feel as though he knew Jesus personally and he was simply sharing the stories that his close friend wanted you to know.

It was he who administered my first two sacraments outside of my baptism: He heard my first confession (I do not remember what sins I committed, but I do remember they did not require me to be sent to the principal's office) and did my first Holy Communion, which is a monumental moment for a young Catholic child.

When father Maloney was transferred to another parish when I was 11, I was sad.

When father Maloney's name appeared on the list of deviant offenders last week, I was devastated.

How could someone who had our complete trust abuse it in such a heinous way? How could he have robbed children of their childhood?

The report named 99 priests in the Diocese of Pittsburgh. Three of them served in my parish when I or one of my siblings attended the school: father Maloney, father Ray Rhoden and father James Somma.

How can we trust the bishops that allowed this to happen?

Simply, we cannot. All of those responsible must be held accountable.

The actions of those priests and those in charge cannot take our faith away, but they have made it impossible for me to trust this church.

I've always held a deep fondness for that asphalt playground that strained to hold my boundless energy, along with that of hundreds of other children. For eight years, it was a place of carefree joy, where the only thing I dreaded when I stepped out of the school and onto the grounds was whether I would be picked last for dodgeball.

Now I cannot erase from my mind the knowledge that some children were deeply hurting on that playground. Some children were holding in a secret so dark and so humiliating that their souls burned with the shame and the fear they felt every day.

And I cannot forgive.

I have stood by my church in past crisis, thinking surely it will get it right somehow. This time, that feels impossible.

I will stand by my faith -- a faith that has guided and shaped me at my core and is difficult to square with the corrupt institution that allowed sick men to steal my classmates' lives and then facilitated them to do the same elsewhere.

The only thing that is uncertain now is how I will find forgiveness.

Every time I search in my mind's eye and scan the faces of my classmates on that playground, looking for signs of who needed help, I find it difficult to imagine that forgiveness coming anytime soon.