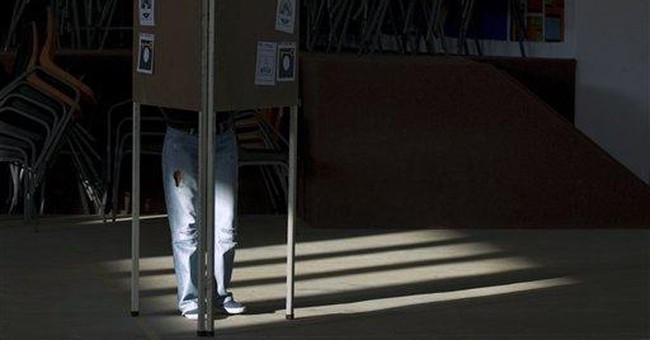 A poll of opinion polls shows that Americans are undergoing rapidly changing attitudes.

RealClearPolitics, a national polling aggregator, shows that Americans are becoming less and less thrilled about the direction of the country and with the job Congress is doing. Support has been peeling off steadily, says RealClearPolitics executive editor Tom Bevan.

The danger for the Obama administration and the Democrat Party is the independent voters' shift away from Democrat policies.

“Independents have flipped negative,” warns Bevan, who mans the polls for a living. “That’s not a good thing for any party.”

You need to look no further than the data coming out of the first gubernatorial races since the Democrats took control of Washington to identify voter angst and ire.

Gubernatorial races in New Jersey and Virginia appear to be heading in different directions but are, in fact, two sides of the same coin.

In Virginia, a state that swung first in 2006 to Democrat Jim Webb in his Senate race then further to Obama in 2008, Republican Bob McDonnell is leading Democrat Creigh Deeds by wider margins with each new poll.

In New Jersey -- a state that has been Democratic for years (the last time the state went for the GOP presidential candidate was in 1988) – the Democratic incumbent, Gov. Jon Corzine, continues to average about 40 percent of the vote, while his Republican challenger Chris Christie has fallen more than six points in the past two weeks. The beneficiary of Christie's descent has been Chris Daggett, an independent who is winning support in the double digits.

“What do these phenomena have in common?” says Villanova political science professor Lara Brown. “In two words: disillusionment and disgust.”

Americans, particularly registered and likely voters are disillusioned and disgusted with both political parties and their candidates, who seem to be over-promising, under-delivering, asking for too much, and taking advantage of their positions, explains Brown.

Americans are simply worn out by inflated rhetoric and the "Lifestyles of the Rich and Famous" existence of the Washington insiders who just a few months ago said they were outsiders.

Voters are left wondering what happened to the candidates they voted for? The voters thought their candidates were avengers -- people who were going to clean-up Washington’s corrupt culture, stop partisan bickering and remove those bad Wall Street titans who retained their fat bonuses only because taxpayers bailed out their companies.

• A CNN poll last week suggests that most people no longer agree with Obama “on the issues that matter most to them."

• Rasmussen's numbers show that 31 percent “think Congress has a poor understanding of the health care proposal,” down four points from August (which, if you recall the summer town hall meetings, was not a high point for congressional approval). Worse, according the poll, only 18 percent “think the (health care) plan will be a bipartisan effort."

• Another Rasmussen poll shows only 49 percent “think that the economy will be stronger in five years than it is today.”

• Most Americans are "very concerned" about the economy and 60 percent “think the economic conditions are getting worse," a new Gallup poll shows.

Adding to these fears is Iran and its apparent move toward developing nuclear arms (or at least, according to CNN, "9 in 10 Americans" think they are) and we don't seem able to either stop or even (as was promised) talk to them.

Add to that Afghanistan, which people think is spiraling out of control.

And few Americans seem to understand the President's unwillingness to sit down, focus on the issue and make a decision. It is as though they are wondering, "Why is he in motion all the time, and does he ever actually sit at the Oval Office desk to work – like the rest of us?”

Further, only 39 percent of GOPers have a favorable impression of their party chair, Michael Steele, with other polls suggesting that Americans feel like the Republicans are merely "obstructionists."

The White House simply added insult to injury with is fight with Fox News. What happened to the days when presidential administrations stayed above the media fray? Most people are wondering how the White House can even bother to think about this "issue" when it has so many other important matters at hand.

“When you look at all of these things, it is no great surprise that the thousands of Tea Party activists haven't embraced any one political party and that Glenn Beck's anti-administration, small-government, pro-individual freedom tirade continues to draw some of the highest ratings of all three cable news networks,” observes Brown.

What does all of this portend?

Very possibly, a Ross Perot-moment, or the emergence of someone who is going to come forward with serious charts and serious language that angry Americans will see as authentic, rather than the glitz and glamour of the sales pitch of "hope and change."