In the Shadow of the War on Terror 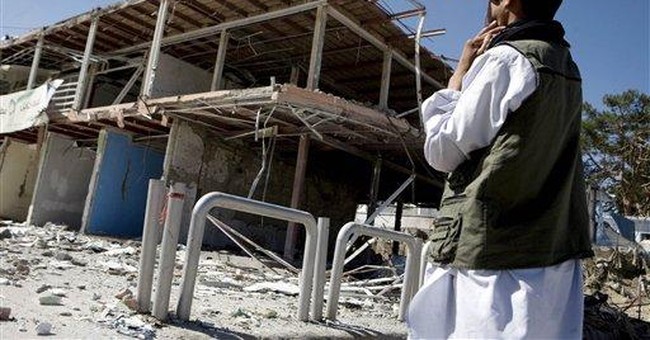 The “Overseas Contingency Program” – more commonly known as the “war on terror” – is back at the center of the political world, thanks to the uncertain prosecution of the war in Afghanistan.

As President Barack Obama, Defense Secretary Robert Gates, Congress and the generals in the field contemplate the damned-if-you-do, damned-if-you-don’t consequences of Afghanistan, terror has reappeared in the American vernacular.

And while words like “Islamic terrorist,” “jihad” and “Muslim extremist” have been scrubbed from administration chatter, we remain at risk from the same people.

Pillar, who heads security studies at Georgetown University, points out that this administration still executes the commitments and policies of the Bush years.

Those security and intelligence programs are irritating to radicalized Muslims who want to do Americans harm – and chilling to left-leaning Democrats at home who fervently opposed Bush.

Pillar dismisses the notion that Americans’ memories of the 9/11 attacks have faded. “If you look at the current debate about Afghanistan, it illustrates that we still equate Afghanistan with terrorism,” he says.

You cannot argue about one without talking about the other.

Why the public has turned away from the topic of terror is understandable: In light of the economic crisis, health-care controversy and unprecedented government spending, people are focused on swift-changing pocketbook issues.

Last month’s arrest of Afghan-born alleged terror-plotter Najibullah Zazi ran like B-roll on the news networks and below the fold on most newspapers, even though his plot was said by authorities to be one of the most significant terror threats to the U.S. since 9/11.

All the bad guys need to do is to unleash one or two suicide bombings in the heartland, and our country, economically and mentally, would become paralyzed.

“The various agencies of government, like the Defense Department, Department of Homeland Security and the Department of Justice, remain fully engaged, as well as state and local law enforcement,” said Mark Davidson, a former member of the Clinton administration and a Navy Reserve captain. “The general public, the press and many politicians, on the other hand, apparently are not.”

Davidson explains that the only measure is “Have we been attacked?” The answer in the public's mind since 9/11 is “No.”

Almost from Day One, the Obama administration distanced itself from war-on-terror language.

Yet opting for “overseas contingency plan” as its national security catch phrase doesn’t exactly roll off the tongue.

The irony is that the war on terror has been ongoing since the 1970s, dating to the hijackings of airliners, the killing of Olympic athletes in Munich, the Berlin disco bombing, the Pan Am Lockerbie bombing and the Marine barracks bombing in Beirut.

Davidson says it only became more intense after the collapse of the Soviet regime in Afghanistan and the crystallizing of extremist elements bent on hatred of the West (which, ironically supplied the weapons and training to defeat the Soviets in Afghanistan).

As for Americans no longer listening to talk about the threat, Davidson says the Obama administration lowered the volume.

“Frankly, the American public was burned out by the color-code threats and rhetoric coming from the previous administration,” he said. “Creating a perception of constant fear and using that fear for political gain is very dangerous.”

Possibly that is why many Americans and the press paid little attention to the Zazi arrest.

Unfortunately, the pendulum has swung in that direction with some members of Congress and within the administration, too. The challenge for the president is that a left-leaning minority brought him his party's nomination, partly based on war opposition.

“This minority wants to withdraw from Afghanistan,” he added. “Such a withdrawal may prove to be a disaster as our allies see a lack of commitment, Pakistan suffers a Taliban blitzkrieg and violent extremists possibly gain access to highly sensitive material in a Taliban-influenced Pakistan.”

U.S. generals David Petraeus and Stanley McChrystal, the two military men in charge of Afghanistan strategy, know how to engage and defeat insurgencies. Our infrastructure knows how to pursue violent extremists.

Let's hope the debate – and the White House’s war-policy “review” – leads us to prosecute the war to a sensible conclusion, defeating al-Qaeda and leaving Afghanistan as stable as possible and able to fend for itself.