Primary in PA may 'matter' 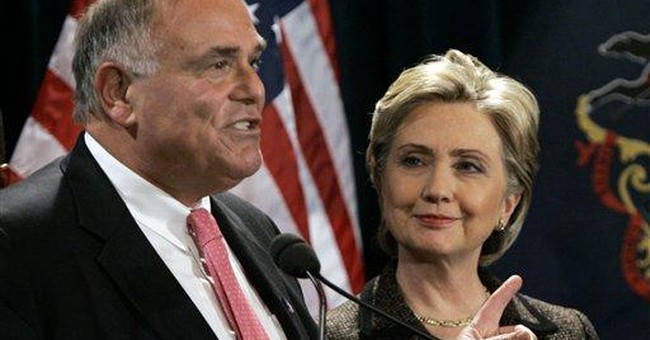 The road to the White House could run through Pennsylvania, Gov. Ed Rendell says.

But this is an election about which no one should make any assumptions, Rendell told the Tribune-Review in a telephone interview Wednesday.

After voters in 24 states cast ballots Tuesday, Sen. John McCain of Arizona tightened his grip on the Republican nomination. But matters were hardly settled on the Democratic side, where Sens. Hillary Clinton of New York and Barack Obama of Illinois ended Super Tuesday in a virtual tie.

Unlike some states, Pennsylvania did not move its primary to Tuesday and, for the first time in more than 30 years, the delegate choices Democratic voters make April 22 indeed might matter. Pennsylvania will have 188 Democratic delegates and 74 GOP delegates on the ballot.

"Pennsylvania really could still be a big part of the decision-making process," said Rendell, a super-delegate to the August national convention in Denver who has pledged his support to Clinton. "While there still are a lot of delegates and a lot of victories to be won before our primary, it is looking more and more like the road to victory comes through Pennsylvania."

Even his predecessor, former Republican Gov. Tom Ridge, a McCain supporter, believes the state might be in play.

"It is conceivable that you get into April and no nominee has a requisite delegate count and all of a sudden, even though Pennsylvania did not move its primary up, it becomes relevant to the outcome," Ridge said. "All eyes are on Pennsylvania -- not a bad thing from my point of view, and I suspect Gov. Rendell doesn’t see it as a bad idea either."

The possibility excites others in the state -- tourism officials and managers of hotels that host political events, for example -- who could benefit from a primary that attracts national attention.

Bob Bee, director of sales for WTAE-TV, said Pennsylvania would be a target for Democrats' advertisements and perhaps political action campaign ads, especially if the Texas and Ohio primaries are not conclusive.

As a former national party chairman, Rendell acknowledged that securing a win for Clinton in Pennsylvania is becoming increasingly important for him.

"Leading up to Pennsylvania there are some excellent potential states for Sen. Obama -- Virginia, Maryland and the District of Columbia -- and some toss-ups like Washington and Wisconsin," he said. But he thinks Clinton might fare well in Louisiana on Saturday and in Texas and Ohio on March 4.

"So, rolling into Pennsylvania might be really important, but who knows? One thing that I have learned about this election is never to say it’s over," Rendell said.

Kate Michelman, an Obama backer from Central Pennsylvania and former president of the National Abortion Rights Action League, said her candidate could win in some areas of the state, such as Philadelphia and its surrounding counties and even the central part that traditionally is considered a Republican stronghold.

"This will be a very important state for him, and I think that he will do well here," she said. “ ... Do not discount Central Pennsylvania. I would like to bring him out here and prove them wrong."

Rendell isn't sure whether Pennsylvania will determine the Democratic presidential nomination; the campaign could remain split until the convention. But he believes McCain will carry the state and "that one will be the wrap-up for him." Former U.S. Sen. Rick Santorum, who supports former Massachusetts Gov. Mitt Romney, points to the McCain victories in neighboring New York and New Jersey and Ridge's support as big factors.

"I don’t doubt that McCain will do well in the raw vote, but as you know it is the delegate vote that matters," he said.

"There is no part of the country that I am willing to ... concede, because I think people are looking for an authentic conservative message, and Pennsylvanians are no different than anywhere else in the country," he told the Trib in a telephone interview. "I think our message will resonate with voters there."

Yet for Republicans, the primary here has minimal importance. GOP delegates remain uncommitted and appear on the ballot with no allegiance to candidates.

"We only really start to matter if the nomination goes to the convention," said Republican State Committee Chairman Rob Gleason, a McCain supporter.

The last time Pennsylvania had a significant role in a primary contest was when Ronald Reagan challenged President Ford in 1976. Desperate for delegates going into the convention, Reagan picked Pennsylvania Sen. Richard Schweiker for his running mate in an attempt to sway Pennsylvania’s uncommitted delegates. The move failed, and Ford won the nomination by 117 delegates.

Despite widespread speculation that Rendell could become a potential running mate for Clinton, he dismisses the possibility.

But he said: "I think that Tom Ridge has a significant chance to be picked by John McCain."

Ridge said he is honored by the suggestion, but that he's focusing on helping McCain win Pennsylvania.

"Then maybe Gov. Rendell and I can face off for the first time in November," he said.