Best Distortion In An Awards Speech, And the Oscar Goes To 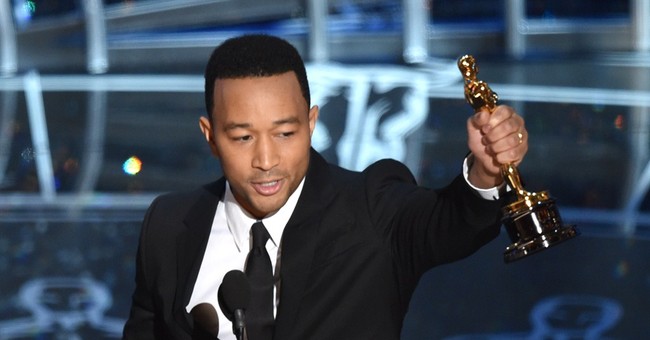 Hollywood lives in a pretend world on a daily basis. So, it’s no surprise on Oscar night, the imaginary is passed off as reality.

Patricia Arquette, millionaire actress, waxed ineloquently about “wage equality” (gee, I hope the grips and gaffers on the set of “Boyhood” got the same pay as she did). Like the world of film does so well, she took us back in time…apparently, back before women had equal rights. Perhaps she was caught in a time warp from her last film, but it is 2015. What exactly don’t women have the right to do that men do? The whole “wage equality” was shredded by the Independent Women’s Forum back in 2013 in a great 3 minute video that was much more enjoyable than Arquette’s 45 second strained demand of what already exists.

But Hollywood elites are used to plugging their favorite liberal causes during their annual moment of self-adoration.

The night ended in Selma. It’s history that too few know much about. This makes is so much easier for Hollywood to manipulate something so precious and so defining.

Amazing songwriter and R&B musican, John Legend and thought-provoking Hip-Hop artist, Common, decided to rewrite and use the past to suit a liberal revisionist agenda. Thousands did not march across the Edmund Pettus Bridge to protest discrimination of sexual behavior or so-called “orientation”, to fight for religious liberty, or even "women's rights." The protest was about something more tangible, immutable and indisputably innate: pigmentation.

”Bloody Sunday” was a horrific time in civil rights history where white police officers brutally attacked the nearly 600 marchers on Sunday, March 7th after they crossed the Edmund Pettus Bridge. A reported 56 marchers were hospitalized with 18 people considered to have serious injuries. The shameful attack was broadcast to an America already on the brink of moving beyond the ignorance and violence of racism.

But this march, and those multi-racial efforts which followed across that landmark bridge, were not about homosexuals who didn’t have the right to vote. They weren’t about “equal pay.” They weren’t about using the bathroom of your gender-of-the-day choice. Selma was about the violence and intimidation that was the hallmark of American politics throughout the 19th and early to mid-20th centuries that denied the very humanity of people of my complexion.

Civil rights history is regularly abused by those who live in a fantasy world of extravagant wealth and extreme contradictions. They demand equal pay while never extending that to those who make their careers possible. They lecture us on marriage, while divorcing (seemingly) as frequently as their next movie debut. And they demand a world of “diversity” while they choose to show virtually none in the actors nominated for the most recent Oscars.

How do you even begin to compare these two situations? Add to this that there were 12,075 black individuals (no data to separate male/female) imprisoned in 1926, which was 0.1 percent of the entire black population at the time. Are we to believe that America is more racist now than it was in 1850? In 1926? (By the way, in 2013 white and black inmates convicted for drug offenses are nearly identical, 14 percent and 15.9 percent respectively. Contrary to music mogul Russell Simmmons’ absurd claims, the majority of black inmates--58.3 percent--are incarcerated because of violent offenses not drug convictions, according to the Department of Justice.)

Context matters. Slavery among blacks wasn’t punishment for an individual’s wrongful actions; it was the result of intra-racial betrayal, greed, and a racist system of human degradation codified on the federal and state level. That’s not to say there is no racial injustice that needs to be addressed in our justice/correctional system, historically and presently. But the injustice of incomplete and deceptive comparisons leads many to blame it all on racism, rather than where most of the locus of control resides—within each of us. We choose to act or react. We choose right or wrong.

Tragically, in all of this, there is no mention of one of the most influential components of whether children will, disproportionately, commit crimes leading to higher rates of incarceration—the absence of fathers. How about a monologue about the importance of fathers and the destructive consequences that result from their lack of involvement in children’s lives? When the majority population faces fatherlessness at 35.7 percent and 72.3 percent of black children are born into homes without fathers, why isn’t this an issue of equality? Where are these truly courageous Academy Award speeches?

The answer? Lost like Neil Patrick Harris’ clothes, ditched in a desperate stint for a laugh. Hollywood’s influence, though, is no laughing matter. It can be an incredible force for good. But when it pretends it’s telling the truth, there are real consequences in the real world.