Conversation: For the Nation's Medicine, a HICA Moment 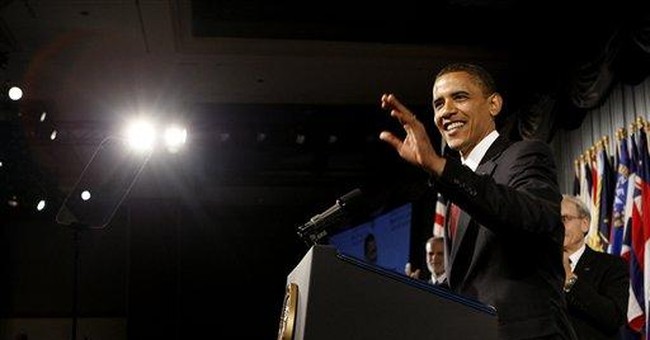 So tell me again why you aren't a doctor.

Because my father - an Edinburgh-trained general physician and surgeon - urged his son against it. He foresaw the day, now rushing at us, when the federal government would be setting rates, approving procedures, and broadly regulating the medical profession.

President Obama and congressional Democrats want to extend medical insurance coverage to everyone, drive down health-care costs, and raise the quality of care. They're talking about a "public option" plan to show the way by competing with private-sector insurance plans. What's the matter with that?

All three cannot be done. And the "public option" - the government plan - inevitably will become the only option, hence the only plan.

But the president isn't saying that. In his remarks to the American Medical Association, he told the nation's doctors, "The public option is not your enemy; it is your friend."

Sort of like, I'm from the government, and I'm here to help you. Thoreau had it right when he wrote, "If I knew for a certainty that a man were coming to my door with the conscious purpose of doing me good, I would run for my life."

At the AMA, the president talked about people like you, who dismiss his proposals as "socialized medicine" or nationalized care. The hour for reform and change is at hand. Instead of being part of the problem, why don't you become part of the solution - and join the debate?

OK. For openers, try on these quotes:

1) Liberal economics columnist Robert Samuelson: "It's hard to know whether President Obama's health care 'reform' is naive, hypocritical, or simply dishonest. Probably all three. The president keeps saying it's imperative to control runaway health spending. He's right. The trouble is that what's being promoted as health care 'reform' almost certainly won't suppress spending and, quite probably, will do the opposite."

3) Professor Scott Harrington of the University of Pennsylvania's Wharton School: "In reality, equal competition between a public plan and private plans would be impossible. The public plan would inexorably crowd out private plans, leading to a single-payer system. ... Health-care providers and other Americans should recognize this reality and be prepared for the consequences."

YOU obviously agree with those observations. Why?

For a number of reasons. Government estimates of the costs of things - in this case, $1.5 trillion over the next decade alone - always are notoriously wrong on the low side.

So Obama and his rubber-stamp congressional lefties are hell-bent to Europeanize the nation's health care with state-run (yes, socialized) medicine. To borrow from two old songs, Give 'em the ol' razzle-dazzle and Promise 'em anything, but give 'em socialized medicine. Waits will grow longer, costs will go up, and quality of care will go down. It doesn't make any sense.

WHAT would make sense?

Politically, we probably have reached a time when the government has to mandate health care coverage for everyone. It could do that simply by requiring every taxpayer to attach to his federal tax return a certificate of coverage for him and his dependents. (Non-taxpayers would get medical care through a pool funded in any of various ways.) Then private insurance carriers would compete to sell state-sanctioned plans at the lowest costs for a multitude of coverage ranges.

That sounds a lot like the Federal Employees Health Benefits Plan under which congresspersons and presidents buy their medical coverage.

Bingo. Very much like that - and there was a time when Obama was suggesting it, but apparently not anymore. If such an arrangement is good for lofty congresspersons and presidents, is it too good for the everyday rest of us?

Wow. A plan already in place - and used by the president himself. Why isn't he using it as a model for the country?

Because he is a statist at heart - and he has the popular support and the votes in Congress to socialize medicine on the European model. And despite his tendency to complexify things and conceal them in an inky rhetorical cloud, that's clearly what he wants to do - and that's what we're likely to get, and don't bring up the new taxes that will be imposed in its name.

Indeed. With the consequent rationing that defines care restrictions and price controls - and the tearing up of the private doctor-patient contract that is the essence of American medicine. That's the freight train rushing at us.

Your father actually foresaw this?

He did - and in many ways the train already has arrived, which helps explain the smoldering fury of many of the nation's physicians. The new regime seems set on replacing private medicine with government medicine. In the slang acronym, we face a HICA moment.

For Here It Comes Again.