For Obama, a Week of Personal Growth? 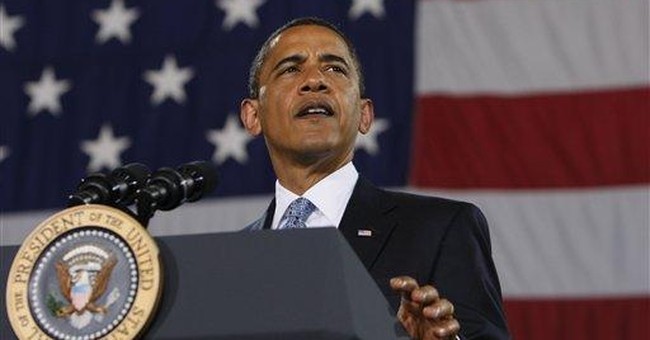 President Obama nominated Sonia Sotomayor for the Supreme Court and promptly left town. The preceding week hardly could go down as a high point for him or his administration - but maybe, in certain ways, as a period of personal growth. Time for a break.

Think about it. The week had featured these items on an incomplete list, most related one way or another to national security:

-- In a bizarre at-a-distance debate with former Vice President Dick Cheney, Obama came off second best - not even close - on Guantanamo (Gitmo) and the interrogation memos.

-- On interrogation, la belle Pelosi - a goofy-left Democrat, Speaker of the U.S. House of Representatives, and third in line for the presidency - got caught needing a new perm. She accused the CIA of lying to her - and about her - regarding the simulated drowning ("waterboarding") of three jihad terrorists at Gitmo. And once more Howard Baker's question about Richard Nixon was spreading darkly around the land: What did she know and when did she know it?

-- Obama took multiple and contradictory positions regarding various aspects of the Gitmo matter, lopsidedly lost the support of both lopsidedly Democratic houses of Congress on funds to close the place. He adamantly refused to release the interrogation memos - as requested by Cheney - showing whether waterboarding (etc.) had elicited information saving perhaps hundreds of thousands of American lives.

-- North Korea once again dissed the civilized world by detonating a second nuclear device and testing missiles to deliver them. (Iran works resolutely 24/7 for the same capabilities.) Obama called on America's allies and the enervated, effete UN to "stand up" to North Korea, and pledged to "take action." One supposes the pledge will include - as Obama has insisted regarding Iran's Mahmoud Ahmadinejad - "engagement" to convince Kim Jong-il of America's goodness and good intentions in this new day following the dread Bush-Cheney years.

-- Obama went to the National Archives to read key Founding documents in the original, and there orated on the need to live by their principles in connection with such things as Gitmo and the housing and interrogation of jihadists.

-- Also at the Naval Academy, and later laying wreaths at the Tomb of the Unknowns on Memorial Day, Obama employed identical phrasings about those who gave their lives in battle, those newly commissioned as Navy and Marine officers, and all those in military service to the nation - aptly terming them "the best of America" representing the best of the American character.

The foregoing litany is as troubling as it is uplifting.

This president is a very good man who talks a very good game. He also is very liberal (by his votes, remember, the most liberal senator), and in many areas falls exceedingly short on follow-through. But as the midshipmen he commissioned grew as their minds were disciplined during their years in Crabtown, so this president may be growing in office. One has to hope.

Gitmo and the interrogation memos disclose a lot about Barack Obama. A peripheral academic, he entered office with airy theories and noble ideals - and the bottom-line leftie notion (first promulgated by the radical French political philosopher Jean Jacques Rousseau) that all men are born good but corrupted by bad institutions.

Obama declared on just his second day in office he would close Gitmo. In subsequent months on the job he has been fast-tracked in reality - and realpolitik:

-- Not all men are necessarily born good. About 100 born-bad jihadist killers can be neither tried nor let go but must be held in preventive detention.

-- His own Democrats don't want these born-bads housed in their states, so they have voted lopsidedly to deny Obama the cash to close Gitmo.

-- Waterboarding did produce information that likely saved many American lives.

-- Although the Declaration and the Constitution contain the highest principles, Kim and Mahmoud disdain them. What's more, it's a bust to call upon the nation's military ("the best of America") and its newly commissioned officers to uphold such principles while releasing born-bads dedicated to eviscerating those in the military and the civilians they protect - thereby gaining eternal life with allah and 72 virgins.

Obama may be thinking....

Let's see. To acknowledge much of this would strike a lot of people as an admission that Bush and Cheney were right. Growth in office? Oh, never mind.

Best to let things settle. And move people's minds to something different - like health care and, for the Supreme Court, an Hispanic woman from the Bronx.